As I've mentioned before, baking is not my thing. The whole point of starting this blog was to challenge myself with cooking/baking/and all things food, so I'm trying to bake. I went out for Happy Hour with my coworker Lisette a few months back to this great cuban restaurant downtown. This place has fantastic mojitos, which you can actually buy a pitcher of, for a whopping $70! They're totally worth the money, they're that good. The dessert menu includes a mojito cheesecake, which inspired me to try to make an equally creative cheesecake.

I found a Giada recipe for Individual Orange and Chocolate Cheesecakes and boy did they look good. I gave it a try. The recipe calls for chocolate wafers - 2 stores later, on a trip where we discovered a flat tire, I settled for Oreos and actually scraped the creme out of each cookie to make the crust. That wasn't too bad...

It gets worse. Part of the problem I have with baking is how precise you have to be... the recipe clearly outlines "Special equipment: mini muffin tin". Yes, Giada (or her cookbook writing lemmings) took the time to say SPECIAL EQUIPMENT for the impatient idiots who won't read the whole recipe through. Well, I missed it. I used regular old cupcake sized muffin tins. The mixture barely covered the bottom of each compartment! I hurried up and made another batch of the filling and poured it onto the first batch. I bent a cake pan all-sorts-of ways to make a water bath for the mini cakes... Totally frustrated I put them into the oven, then realized I had no clue how long to bake them for since I'd modified the recipe. (Insert temper tantrum, whining, and pouting here.)

I took them out of the oven after a while and put them in the fridge, thinking they would solidify a bit more in there. Ehhh... they did, a little, but not nearly enough to actually get them out of the tins! FAIL. The upside was that they still tasted delicious! The consistency was way off, but the taste was great. Bryce and I spent a week sneaking into the fridge with a spoon for yummy bites :) Then, they were gone.

I had to try them again. I blame "The Little Engine That Could" for that stubborn attitude. I purchased the MINI muffin tins, because seriously, who has those laying around? I found chocolate cookies WITHOUT creme, this attempt was proving better before the oven was even turned on. Mix, mix, mix, pour, pour, pour, bake, bake, bake... I felt a lot better about this batch and I was right. They were a lot sturdier, like cheesecake should be. I had read the many reviews on the recipe where people gripe about how hard it is to get the cheesecakes out and I tried to take the advice of those who has already made these: I put them in the freezer for a bit, then slid a butter knife around each lil' cake. They came out all in one piece, but it was nothing to look at.

This attempt was still MUCH better than the first, so I took them to a BBQ and everybody loved them, YAY! As you can imagine 11 mini cheesecakes (I'll let you guess what happened to #12) go pretty quickly. They were good, I succeeded in making them... well close enough, but all that work for 11 mini cheesecakes and 10 minutes spent trying to get them out of the pan = I won't be making these again. My Mom has made mini (regular cupcake size) cheesecakes for years, so the next day I called her up and got her recipe. It uses foil papers and no water bath - now that's better! I may try to add the orange/chocolate combo, or another yummy twist on cheesecake, to that recipe in the future.

In this case, I should have asked Carol first and left Giada alone!


The first batch in regular sized muffin tins, before baking: 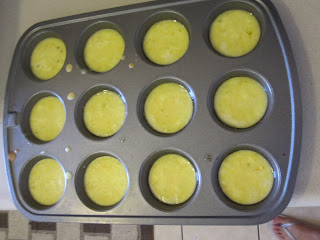 The second batch in the mini muffin tins, after baking: 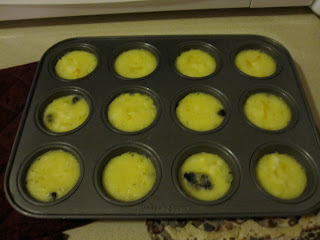 I told you they weren't pretty! However, they were very yummy :) 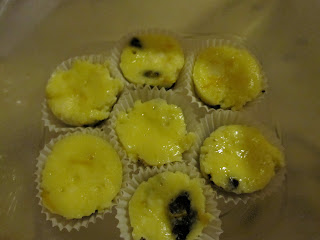 Email ThisBlogThis!Share to TwitterShare to FacebookShare to Pinterest
Labels: Baking