It's Saturday night and I haven't had a schedule, plan, or appointment for the entire weekend! Between working, babysitting, and being on 2 volunteer boards, I never ever have a weekend to myself. Last night we went out for pizza and to a movie with our friends. This morning was spent at the Farmer's Market and the day was spent at my favorite beach! Now Bryce is relaxing napping on the couch and I'm enjoying  watching repeat episodes of Supernanny and blogging far too much for my own good.

Keeping myself so busy makes moments, days, and weekends like this even more enjoyable when they do come around. As great as this weekend has been, the all-time high of the past month was our shopping spree to Ala Moana Center a few weeks ago. After my bridal shower and our engagement party, Bryce and I were gift card wealthy! After cashing in on an iPad at Best Buy and stocking up on household items at Macy's, but before testing every set of curtains from Target, we ventured to my happy place: Williams Sonoma.

Have you ever seen me smile so big?! I hope I can pull that off on our wedding day :) 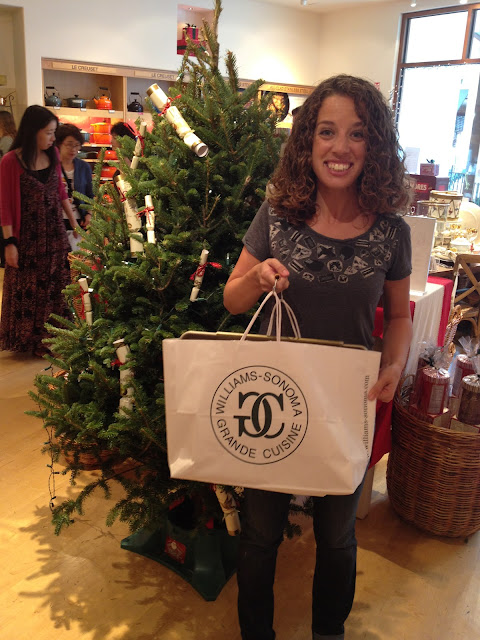 Only 4 days until Christmas! We survived the ending of the Mayan calendar [now what?!] and the last week of work before Christmas. I wish I'd kept track of all the candies, cookies, and other delicious sweets that have made their way into my office, through my mouth, and will be later reincarnated on my thighs in January. There's no turning back now with the holiday gluttony so it's the perfect time for me to share some calorie free sweets with you! Here is our candy Christmas tree in 2010, its very first year. 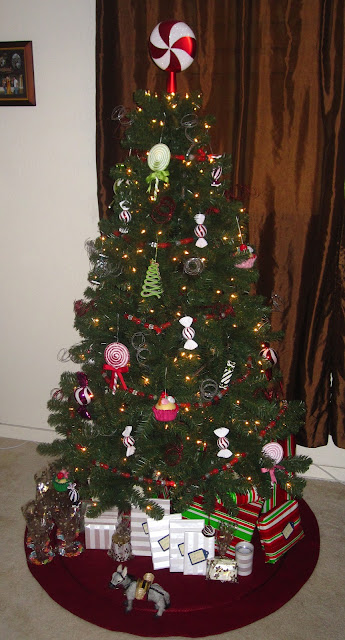 The tree has come a long way since then! Last year I briefly gave you a sneak peek of it but never got around to sharing my Candy Land/sugar high vision with you. It all starts with one artificial tree (lights included!) and some gumdrop garland!
Read more »
Posted by Angela 3 comments:

During my first several years living in Hawaii, it became routine for me to fly into Pittsburgh and head directly to Primanti Brothers for their infamous sandwich. This trip to Da Burgh it took me almost 48 hours to get there! Bryce and I met my cousin Eric for lunch on Monday, the 3rd day of our trip. [Day 1 involved flying and a lot of bad food; Day 2 a deliciously adorable bridal shower.]

Surely you've heard of the "Pittsburgh style" sandwiches on TV before or, if nothing else, earlier on Aloha: Yinz Mangia! It's fresh Italian bread piled high with your choice of protein, cole slaw, french fries, and tomato. It's odd, delicious, and something you can't forget about once you've had one. 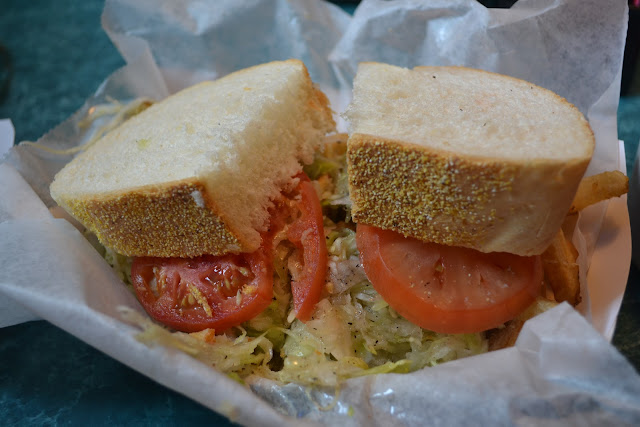 There are locations of Primanti's all over Pittsburgh, leaking their way across Pennsylvania, and even a few in Florida! Although not the original, we usually go to the one nearest to my folks' house on route 60.

On just my second day home in Pittsburgh, My Sandy threw me a Bridal Shower!

You may have no idea who Sandy is and why she's claimed as "mine", aside from a fair assumption that it probably has something to do with me being a selfish only child! My Dad works with Sandy's husband John and way back in 1985, while my Mom was pregnant with yours truly, the stars aligned for their family and ours. Sandy is a nanny and the way the story goes is that my parents brought a six-week-old-me to their house where they sat in the formal living room for our interview. Surely I didn't say too much that day...

Sandy took care of me for many years, until I was old enough to go to school. During that time the formal living room was always off-limits to myself and the other rugrats children who filled her home with fun, among other things (diapers, tears, time-outs, etc). Because I also have an Aunt Sandy, she became MY Sandy! Our families became and still remain very, very close. Those early years offered me a starring role as an adorable flower girl in both of Sandy and John's daughters' weddings! [Sandy and John's son-in-law is also to blame for my becoming a Nittany Lion!] As their family grew and the need for vacations became more pronounced, my teenage self was invited to many beaches to help with the grandkids. More recently I've been promoted to family member status and allowed in the formal living room on holidays and special occasions. We're truly like family and holidays aren't complete until I've visited with BOTH theirs and my own :)

That all being said, I was honored and excited to be having my own bridal shower in such great company and in the living room! My Sandy is one of the kindest and most gracious ladies I know and the shower hosted by her reflected that in every way. She's well aware of my food obsession and even took my quirky request for a food-related shower seriously!

The food was throughout the house and done just right! The esteemed living room had cheese, salami, and crackers, individual veggies with dill dip (so cute!), pepperoni and cheese rollups, and cashews. See the Hawaiian flower napkins and tropical confetti?! It's only fitting, right? 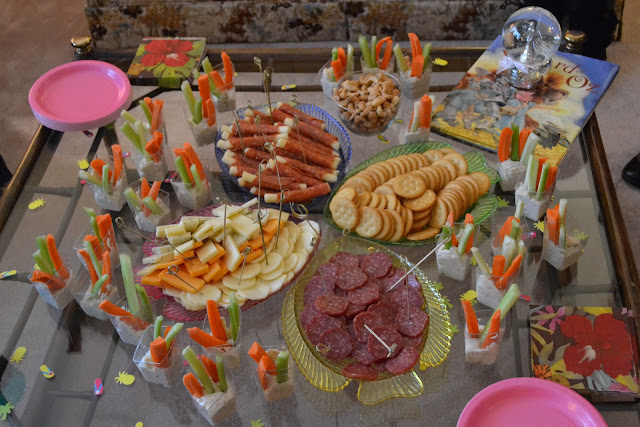