May I begin by saying there's not much Mexican culture or cuisine in Pennsylvania?  I'm trying to name a Mexican restaurant other than Mad Mex and Taco Bell and I think of one off the top of my head. On the other hand Bryce grew up in Southern California, need I say more? A few weeks ago Bryce had suggested that I make enchiladas. Good idea. So, I made enchiladas from the Better Homes and Gardens cook book, of course! Corn tortillas, chicken, sour cream, cream cheese, almonds, etc...

They were so good! I should have softened or heated up the tortillas before I rolled them because some of them cracked and made it look ugly :( But other than that, very good, Bryce and I agreed! The only problem was that I'd never eaten an enchilada before. I knew what I made had tasted good, but didn't know if that's how enchiladas were supposed to taste! The other night we finally made it to a mexican restaurant called Mexico Restaurant - clever huh? I got a chicken enchilada with green sauce and it was pretty similar to what I had made, and equally as good! The overload of free chips and salsa, beans and rice, half of a serving of flan, and a Corona later I was STUFFED! Maybe next time I make them at home I'll have all those fancy fixins, too! 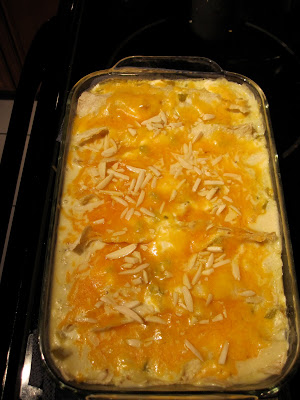 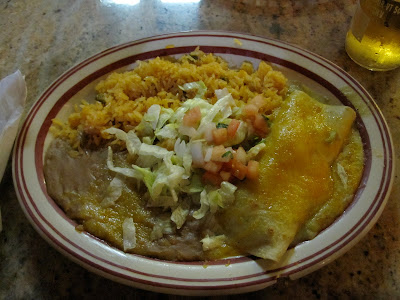