Yesterday, I bought my first Le Creuset item!  I've been wanting one for a very long time, but paying full price was hard to stomach.  I looked at the other, cheaper, ones at Macy's but just couldn't buy one, my heart was set.  You can find Le Creuset online, but paying to ship something that heavy to Hawaii will cost you the other arm & leg!  For the past several holidays, I've been hinting to Bryce that any piece from the Le Creuset collection would be perfect.  He says "I'm not buying you a pot."
Williams Sonoma knows me well and sends me daily emails about what's new and what's on sale.  Yesterday, the email said "Save $150 on Le Crueset Signature Round Wide Dutch Oven, 3.5 quart."    Originally $280, it was on sale for $130.  Sold.
I called the store before they were even open.  Thirty minutes later I tried again, with success.  I put a red one on hold.  All day long, at work, it's all I could think about!  Bryce and I went right to the mall immediatley after I was done at the office.  Even though I had a red one waiting for me, I spent at least 15 minutes looking at all the color options.  Some day, I will have a large and fabulous collection of Le Creuset cookware, and they're all going to match.  Picking the color is HUGE!  The options were cobalt blue (too boring), this wild orange (too trendy), a greyish white "linen" color (too drab), and red (just right).  I stuck with the red one, gladly paid the cashier, and left.  Bryce had to carry the new toy because it's that heavy!
Now it's home and waiting for it's first adventure.  The problem is, I have no idea what to make in it!  Surely, I'll figure it out and blog all about it.  For now, I just look at it, smiling, and take photos to show you!
Here it is! 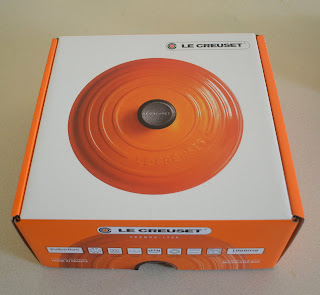 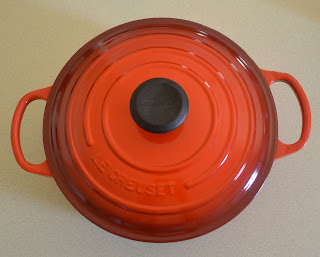 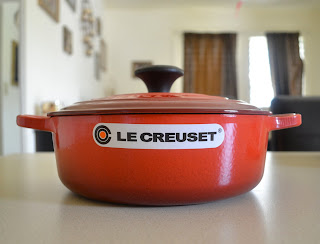 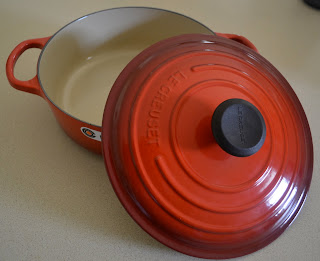