I decided that I was going to (begin to) learn how to cook during my sophomore year in college when I moved into my very first apartment. Mom and Dad came to help me move in I got a quick lesson on cooking a "real dinner". Baked potatoes and chicken with cream of mushroom soup and breadcrumbs. I made enough for my roomies, Erica & Lynelle, and we sat proudly in our first apartment and ate dinner at the awkward counter facing the fridge. That year I lived on that same recipe 859023 times over, turkey and BBQ chip sandwiches, and spaghetti with jarred sauce and frozen meatballs (BLASPHEMY! I know... I didn't know pre-made meatballs existed until Erica and Lynelle introduced me to them, but hey - at least we were eating between vodka & OJs!) I "tried" to learn how to cook that year, and the next, but not very hard at ALL.

Fast forward to my senior year: Lighter class schedules, easy babysitting job that ends at 5 p.m. each day, and WOW more time to cook! (Especially since Penn State parties don't start until after 11!). That's when I bought my first cookbook. $8 for a 30 minute meals Rachael Ray cookbook. I read the thing about 5 times before I made a single recipe. I started to really get into it trying new recipes and cooking them for roomies, family, etc, and drowning the book in post-it notes for things to make in the future. Side note: 30 minute meals DOES NOT apply to amateur cooks, try 90 minute meals... 3 years and a move to Hawaii later and I still have, and love, that book. The binding has fallen off of the pages and has recently been hot glued back on!

Stop hogging the spotlight, Rach. Now I have a broad collection of cookbooks: Giada, Hungry Girl, Sandra Lee, Vietnamese Food, Slow Cooker Recipes, Food Network mags, Everyday Food mags, even our very own Filardi family cookbook! I tried to put myself on a don't-buy-any-more-cookbooks plan. One of my new years resolutions for 2009 was to use every cookbook that I own, I don't think I used them all, but I gave it a valid effort.

So, 2 months ago at Borders I was shopping for my niece's birthday and the kids books are right next to the cookbooks. I specifically told Bryce on the way in, "Don't let me buy any cookbooks!" Like last year's news years resolution, I gave it a valid effort but I failed. I finally, FINALLY got the Better Homes and Gardens Cookbook. You know, the red plaid one! 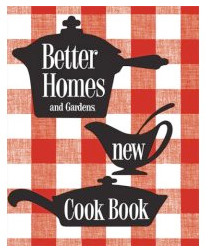 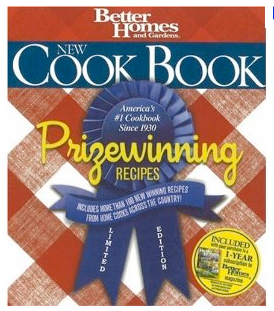 I was so giddy about FINALLY having this kitchen staple. For anyone who wants to learn how to cook, they should start with this book.

I like to cook much more than I like to bake, based solely on success rate. As they say "cooking is an art, baking is a science." Not that I'm good at art, I am really quite bad at science. All of the precise measuring and the temptation to keep the oven door closed are just too much for me! Friday night I sucked it up and decided to make cookies for a BBQ over the weekend. Never in my life have I made cookies from scratch, I was a big fan of slice and bake cookies in high school. So I dug out the hand-me-down mixer from Brooke and John and got to work. I measured carefully, quadruple checked the recipe, waited impatiently for the dough to chill in the fridge for an hour, etc. Finally I got to use the silpat I bought in September (yes, 11 months ago) for baking. I rolled the dough into little circles and bathed them in cinnamon and sugar - are you smiling now? I am :)

I made them a tad too big so the cookies were touching each other, except for one perfectly round snickerdoodle with my name on it! It was begging me to taste it immediately. I poured the measly 3 oz of remaining milk into a glass and sat down with the snickerdoodle and the Father of the Bride. Bryce had been sleeping for hours by the time this baking experiment was done so I enjoyed the cookie/milk/chick flick moment alone, it was great. Taste and texture wise, the cookies were perfect.

The next day the snickerdoodles went to their first and only housewarming party. They were a hit, YAY! The hostess demanded that I leave the few remaining cookies for her, so I gladly obliged :) Baking just went up a few notches in my book. Thank you, Better Homes and Gardens cookbook, I love you. 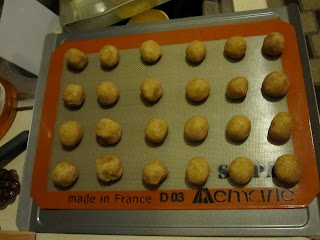 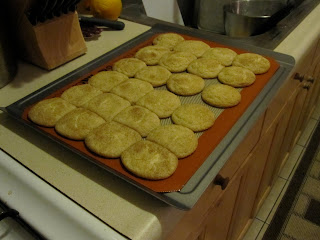 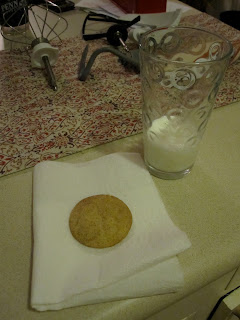 Email ThisBlogThis!Share to TwitterShare to FacebookShare to Pinterest
Labels: Baking, BH and G