I have spent every single Christmas morning of my life in this very living room! Since I moved to Hawaii in 2008, I've been insistent and have made it home for Christmas each year. 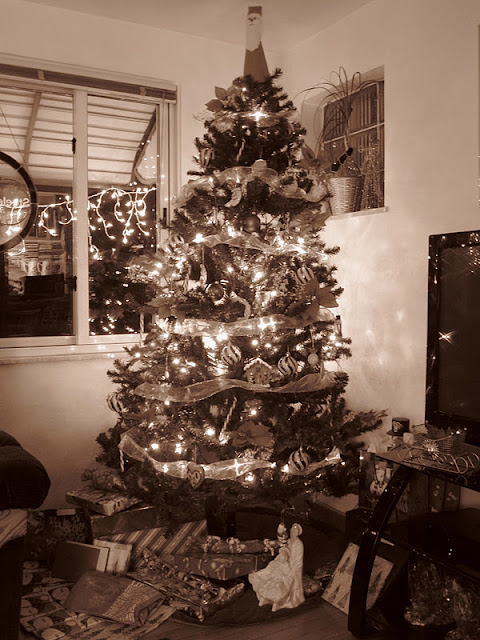 It has always been just Mom, Dad, and I, and this year we'll have our first ever addition since I joined in in 1986 - Bryce is coming! He came to Pittsburgh with me two years ago around Christmastime but went back to California for the big day. Last year he stayed in Hawaii and I went to Pgh. This year was one of lots of trips, finished off with Thanksgiving in California and now Christmas in Pittsburgh together! We're stopping in San Fran on the way home to visit friends & watch the Steelers play the 49ers, then stopping in Boston on the way back to visit our friends and brand new parents John & Brooke & baby Sam!
That said, I'm so excited for this trip and all the visiting and eating we'll do! To get me in the mood I've unbuttoned the top button of my pants and pulled together some pictures from Christmas at home last year.
Mom & I made biscotti together! Biscotti is freaking-hard to make and I'll never do it alone, sorry Mom. 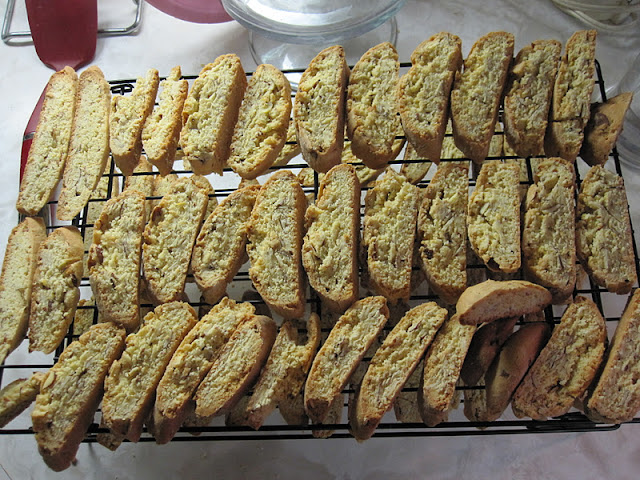 Some of the desserts on Christmas Eve at our house - 7 layer cookies (my favorite and Mom's specialty!) among many others. 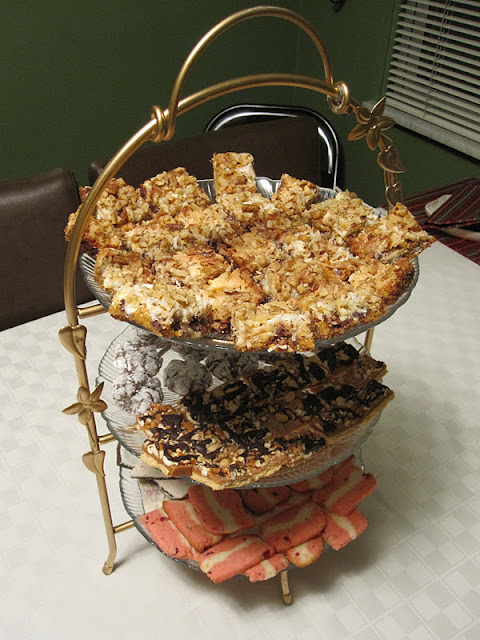 Kiss cookies, pizelles, and more 7 layers - or were they 8 layers? 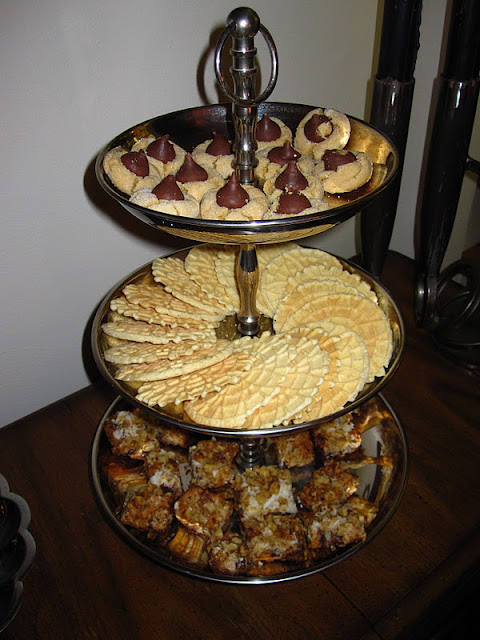 Mom was really into the 3-layered displays last year! Here's a little bit of healthy food for ya'. Oops, celery stuffed with cream cheese isn't healthy?? 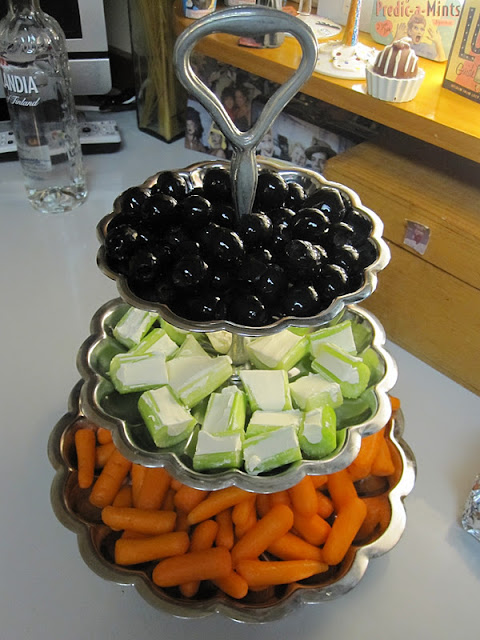 My cousin Eric & I took a trip to Pittsburgh's Strip District where we found this handsome guy! 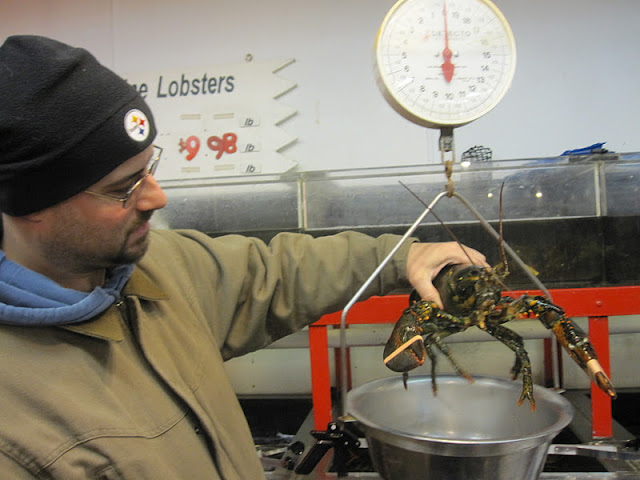 Spencer and Cooper joined us and weren't phased by the gross-ness of pig's feet. 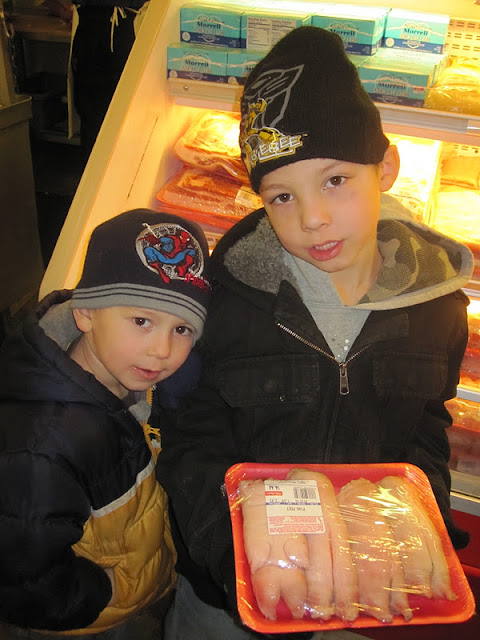 I'm always so happy to be welcomed home by all of the Italian food in Pittsburgh! Pap would have loved all these olives. 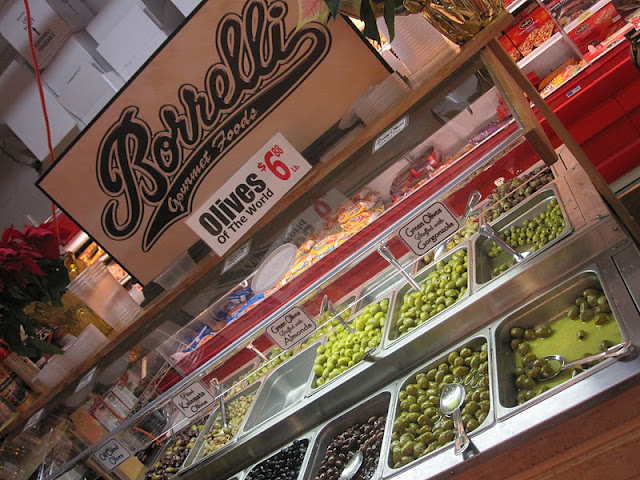 So much pasta! I could live on pasta, but it's Bryce's one and only complaint about my cooking - too much pasta! As I'm typing this now it dawned on me that we currently have pasta leftovers in the fridge and I just ate some for lunch :) Maybe he's got a point. 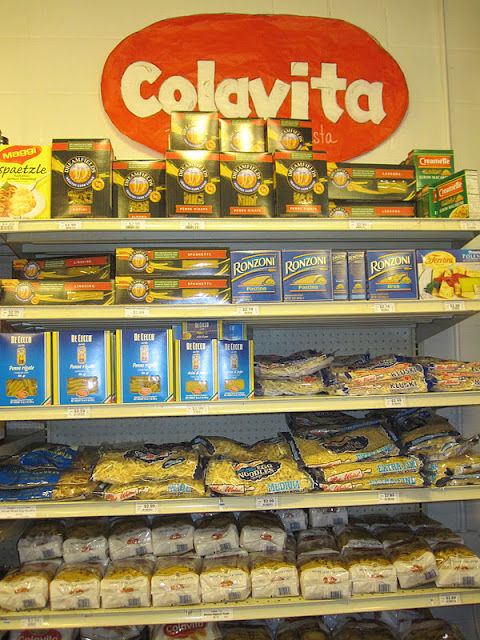 We fly out tonight and I can't wait! I've been promised a sourdough bread bowl tomorrow (in San Fran), tons of homemade food (in Pittsburgh), and a foodie tour (in Boston) and look forward to sharing all of my travelin' food with you.
MERRY CHRISTMAS!
Posted by Angela 2 comments:

When something is super trendy, I try to ignore it.
Sometimes it works - I've only seen half of an episode of the Kardashians and have never watched Anchorman.
Other Most times I resist the urge to jump on the trendy band wagon - only to hop on late, become totally obsessed, and LOVE the trend far past its trendy expiration date. A few examples: I still quote Mean Girls on a daily basis, wear a "poof" in my hair regularly, and just recently joined Pinterest.
I really didn't know what the heck it was at first, but everyone said it was addicting. Yes, that's right - I had 100 pins in 2 days and many of them were food related! Pinterest is basically a smorgasbord of ideas, crafts, home projects, fashion, quotes, and inspiration. You "pin" things you like and put them into categories.  It was equally shocking and exciting to find that it would benefit my cooking adventures. Prying yourself away from Pinterest's page is the hard part. I narrowly escaped the computer chair and took the first great idea I'd found into the kitchen.
Pinteresting Food #1: hash browns in the waffle iron!
Hash Browns in the Waffle Iron
Ingredients
4 medium to large potatoes
Cooking spray
Salt & pepper
Gadgets:
Waffle iron
Box grater
Grate the taters using a box grater. Squeeze the water out of the grated potatoes using your hands, either over the sink or the trash can. Season them with pepper and mix to combine.
Plug in your waffle iron and set it to medium. We put ours on level 3 (of 5). Spray the top and bottom with cooking spray.
Add about 1 cup of potatoes to the iron and sprinkle salt on the top before closing the lid. The hash browns were perfectly cooked about 10 - 11 minutes later. Feel free to ignore the little light on your waffle iron - green, red, green, red! When they were finished they easily came off the iron in one piece. You need not spray the iron after each one. 4 potatoes made 4 hash browns.
Before & after 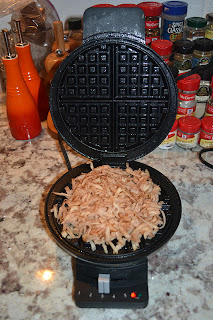 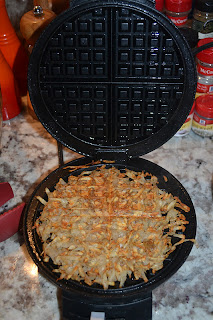 My fear was that they'd fall apart, but they were crispy and intact when they were finished. 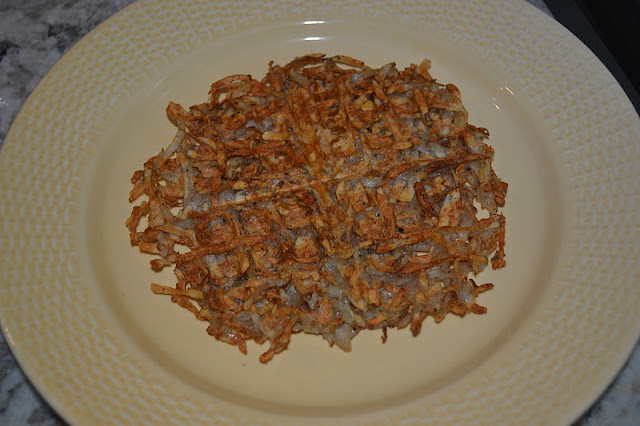 We had an impromptu breakfast-for-dinner of these hash browns, scrambled eggs, fruit cups, and milk! This photo was taken before I assaulted the hash browns and eggs with loads of ketchup. 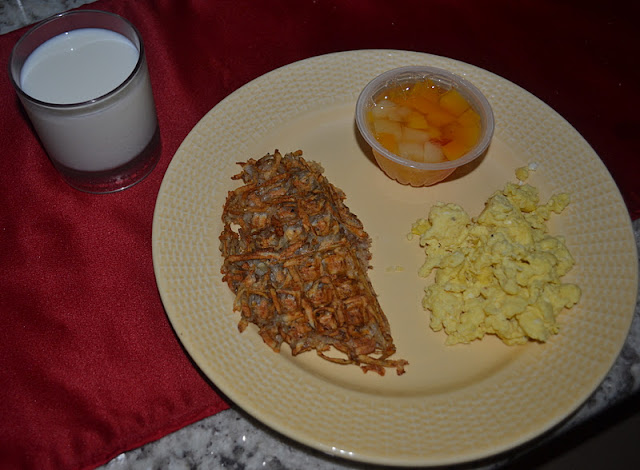 They were so easy and quick to make and tasted delicious - thank you Pinterest! I love that I can get more use out of the waffle iron, too. Next time I'll add some onions for a more authentic hash brown taste.
Pinteresting Food #2: Tooth Cupcakes
Brennan, a good friend of ours, has been applying and interviewing to get into dental school. His girlfriend Molly was planning to throw him a party upon his acceptance. I saw these tooth cupcakes and had to send them to her right away. Brennan got accepted and Molly made the cupcakes perfectly - congratulations Brennan and great job Molly! 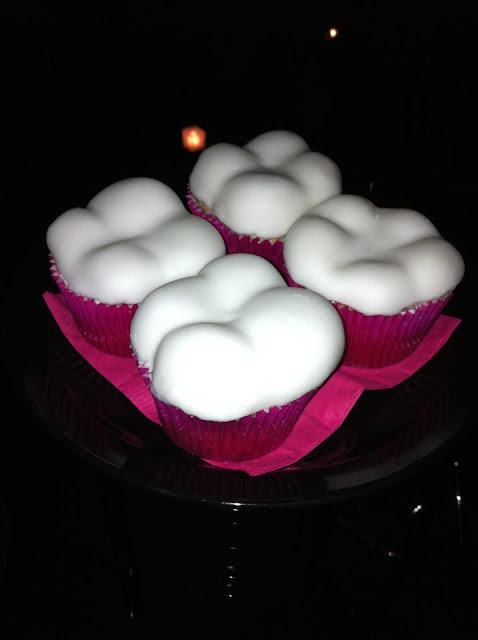 Brennan with his cupcakes, sister Taea, and girlfriend Molly. 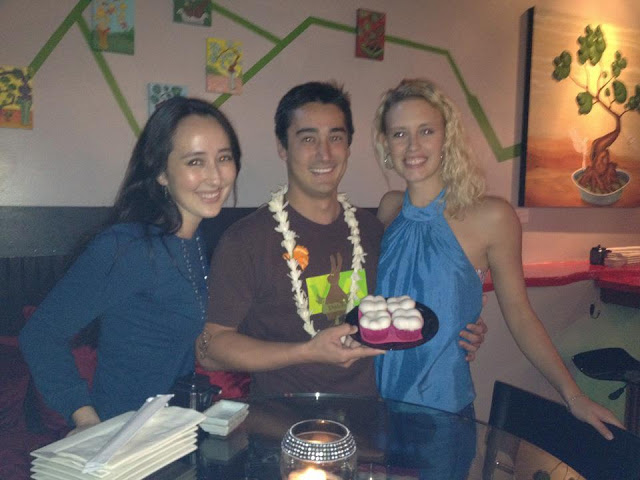 Molly's birthday was this weekend and she made these adorable watermelon Jell-O shots, complete with chocolate chip "seeds"! She found them on the same website as the cupcakes. So.Much.Fun. 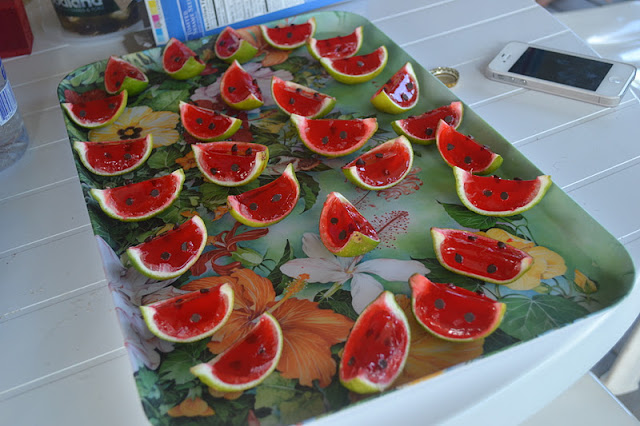 Happy Birthday Molly, and great job with the Pinteresting food! 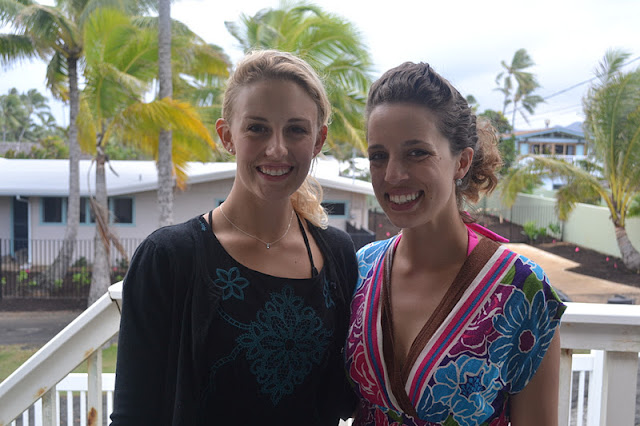 Hawaii can be so funny, sometimes. Earlier this year I was selected for jury duty and I was the only white person or haole as we're called in Hawaii. Everyone else was "local" which tends to mean either Hawaiian or Asian.

During our lunch break one day, some of the ladies started talking about haole brownies. I thought to myself "What the hell is a haole brownie?! It must be either a white brownie or a brownie made by a white person." I sat and listened quietly. These haole brownies seemed to be hugely popular, well known in the Kamehameha Schools community (the school system here in Hawaii just for native Hawaiians), and extremely delicious! Ok, so maybe they like these haole brownies and aren't making fun of white people, I thought. If they were, they wouldn't say it in front of me, right? I've done a little asking around and googling since then, and it seems that these mysterious haole brownies are actually blondies!

One long story later, I'll get to the point - this haole girl was invited to a Yelp Holiday Cookie Swap! I decided to make a delicious recipe I'd tried out a few months ago for cinnamon blondies. They were easy to make and incredibly addicting so they'd be great for sharing. I also found it quite funny that the haole girl would bring haole brownies!

I made them exactly as the original instructed, only I doubled the recipe and used regular-old-cinnamon. I don't have 2 square pans of the same style - one is an 8" x 8" metal and the other a 9" x 9" Pampered Chef stone baker. 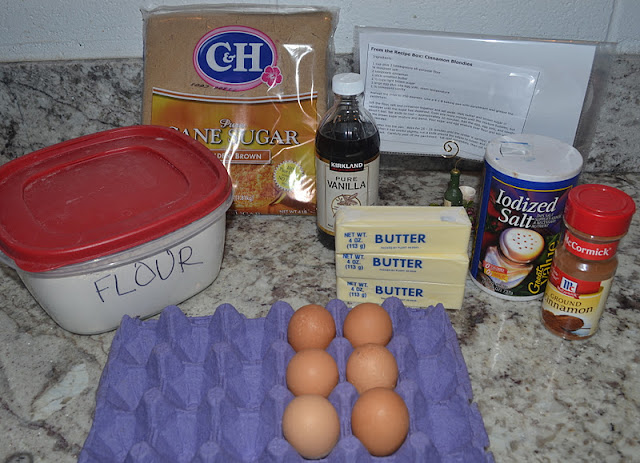 Originally, 2011 was the year of weddings. Bryce and I were invited to 8 just this year! Little did we know it would also become the year of babies. My best friend Jamie and her husband Nick (who have been together since we were sophomores in high school!) had Brody in June, and now I have 4 other friends who are expecting! So technically 2012 will be the year they're all born but whatever...

I'm completely overjoyed by all of the giant life changes and extreme happiness that our friends are encountering this year, and enjoying being a part of it all... and the food! Plus, by the time I'm married and ready to create an offspring, said baby will have so many friends and I'll have so many experienced parent-friends!

Just a few weeks ago I threw a baby shower for Christine, and as soon as that was over I got this adorable invitation for a shower for another friend - Melissa! She and 2 of her friends started an event planning company called BASH events and this shower was as fabulous and over-the-top as one would expect from a group of event planners. 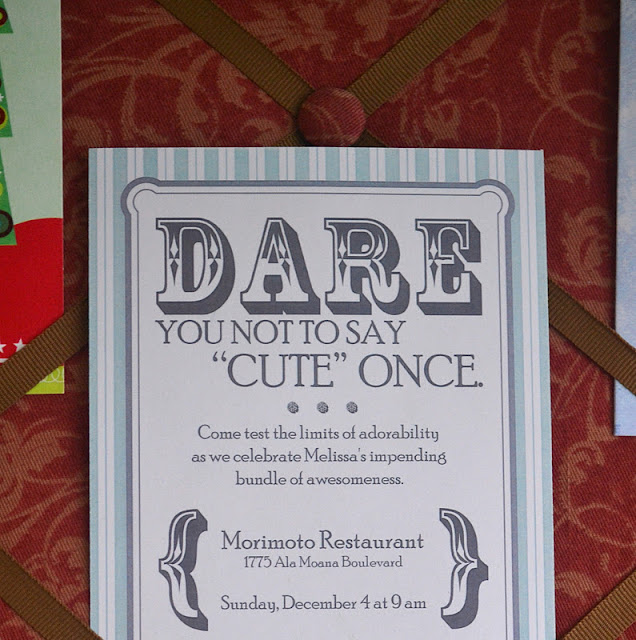 I'd only been to Morimoto once before with the Bitches Who Brunch, and Melissa was with me! When we arrived on Sunday morning we basically had the whole (gorgeous) restaurant to ourselves.

Get Updates by Email