Carnitas - seasoned shredded pork - is my favorite carnivorous option for Mexican food.  It actually means "little meats", who knew!  I like carnitas on my nachos, in tacos and burritos, with a shot of tequila, and so on!

This month's (June 2011) Everyday Food magazine is a really good issue.  It's where I got the recipe for the Roasted Salsa I made last week and also where I found these Pork Carnitas Tacos.  Making it especially exciting, this recipe called for a cast-iron skillet so I was able to use my Le Creuset!  Nope, still not out of the "it's so cool because it's new" phase yet!

2 pounds boneless pork shoulder, cut into 1.5 inch pieces  We bought 2.6 pounds and have leftovers for days!

In a large cast-iron skillet, cover pork with 1/2 inch water and bring to a rapid simmer over medium-high.  Cook, turning pieces occasionally, until water evaporates, about 45 minutes.  It took about an hour for my water to evaporate, probably because I used extra pork!

Season with salt and pepper and continue to cook, turning pieces frequently, until crisp and browned on all sides, about 12 minutes.

Taking photos of meat is pretty gross, I must admit.  In an effort to minimize the disgust and show the transformation while cooking I made this nice little collage.  It shows the pork: first before meeting the hot stove, next covered with water, third about halfway through the cooking process, and finally beginning to brown after 45 minutes.

Usually if I'm starving while cooking it makes me rush and anxious to eat!  Yesterday when I made this we'd just returned from a BBQ and I was full, which was a major advantage because it gave me the patience to let this recipe cook slowly and finish just perfectly.  After about an hour and a half the carnitas was finished, and it looked great.  We tried just a few bites - it was so delicious - and put it away for later... 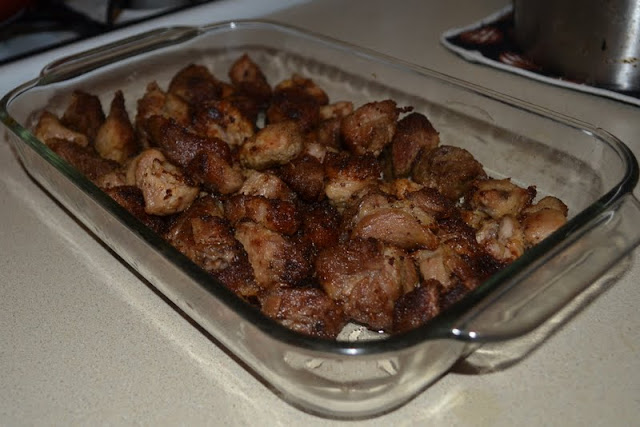 Tonight we made carnitas tacos!  I chopped the pork into smaller pieces and served it with cheddar cheese, tomatoes, and a fresh avocado from the tree in our yard.  Aren't the colors great? 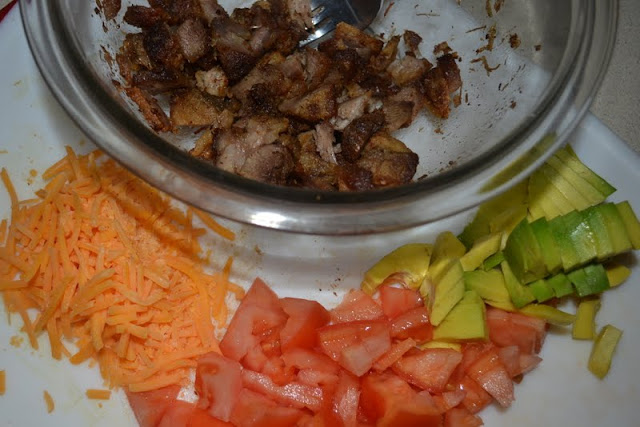 We used the little corn tortillas and heated them in the microwave for 30 seconds.  Here's my absurdly neat taco.  If this photo doesn't give it away, I'm very particular with the way I eat my food!  Items on a plate can not touch each other and need to be eaten one at a time, in a certain order.  OCD anyone? 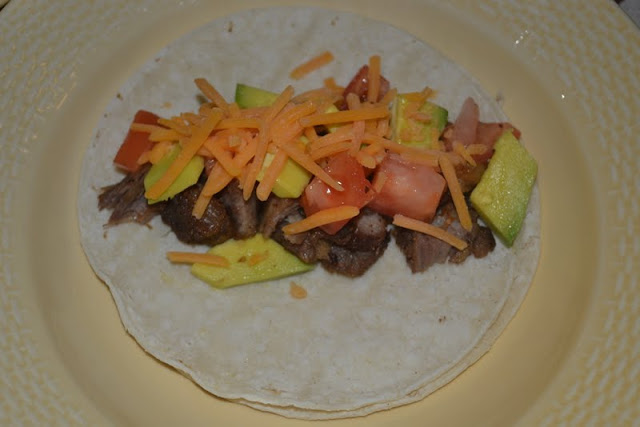 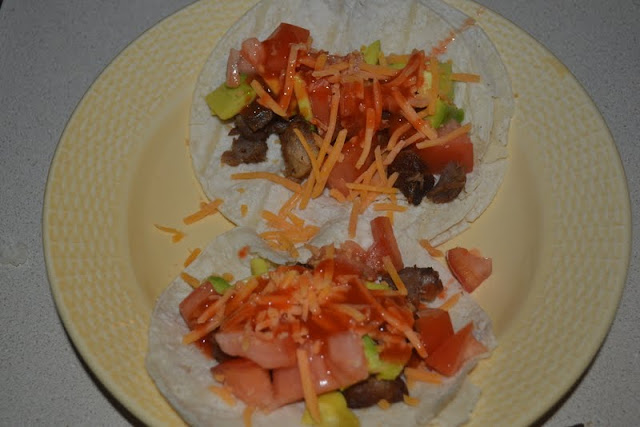 These tacos were so yummy!  The carnitas flavor was just right and the meat was not greasy like it can be at restaurants.  The minimal amount of ingredients used was shocking, although I suppose the long cook time is what really does the trick.  Next time I make this (which may be tomorrow since we have so much leftover) I'll shred the pork pieces instead of cutting them, and serve with Coronas, ole!
Posted by Angela