Buffalo chicken dip and I began our red-hot romance back in 2007.  I distinctly remember the first time we met, it was at a Saint Patrick's Day party at my cousin's friends house.  It was love at first, fiery bite.

Bryce is also a big fan of this dip and enjoys binging on the good stuff every time he's around my Mom, since she cooks to order!  No lie, as soon as plane tickets are purchased Carol asks "Are you craving anything?"  Italian Mothers show their love through food :)  Back to the dip... on Bryce's first visit to Pittsburgh he ate Buff Chix Dip, and only that, for dinner.  My parents recently visited us here in Hawaii and my Mom left a batch in our fridge.

On one particular night Bryce stumbled into our apartment after having a bit too much fun out on the town.  I could hear the fridge opening and closing, the microwave beeping, drawers slamming, utensils clanking, and Bryce causing a general ruckus.  I woke up and had to come into the kitchen to see what he was up to.  He was scooping the dip out of the large pot in the fridge and into a small tupperware, then reheating that in the microwave, and finally, violently shoveling the dip into his mouth with tortilla chips.  I watched him drunkely put a tupperware full of chips (just chips) into the fridge and call it a night on the couch.  Ahh... the joys of college life!  The next morning I was watching TV from the living room floor while he slept on the couch.  He woke up in a cheerful mood and started chatting immediately, telling me that he was starving and hadn't eaten anything since dinner the night before!  Before I could even open my mouth to tell him about his drunken feast - I saw it... the buffalo chicken dip on his foot!  It was all the proof he needed to believe my story, although we opened the fridge to see the chilled chips in the tupperware container and also found a spoon dropped into the pot of dip!  We then spent the rest of the morning laughing, and probably eating more dip...

So when Bryce's birthday rolled around just this week, BCD was a must on the party food list.  Believe it or not I actually didn't have a recipe for the stuff.  I found one here, then combined it with my Mom's recipe, and doubled the quantity.

Drain 4 (10 oz) cans of chicken and put into a large pan over medium heat. 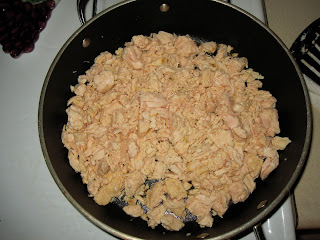 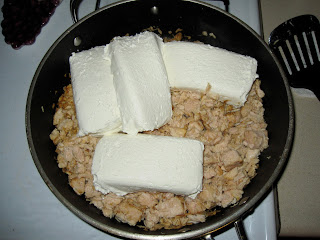 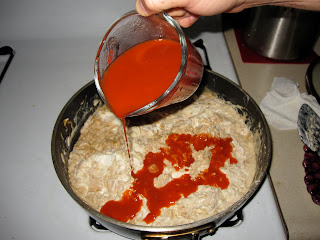 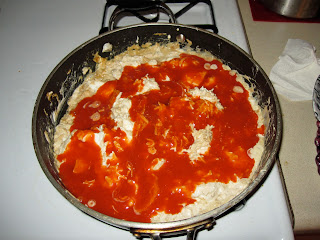 and mix until heated through. 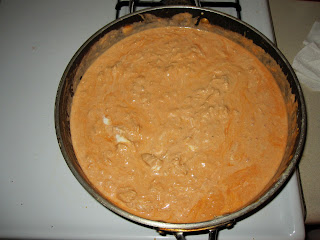 Next up  - 2 cups of blue cheese dressing (although you can use ranch!)... 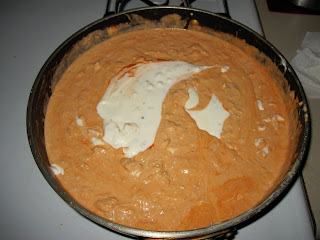 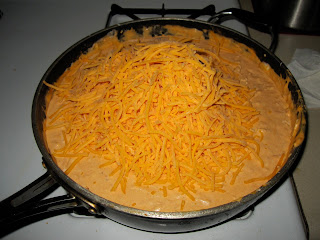 I transferred the dip into the crock pot and turned it to "warm" just before the party began! 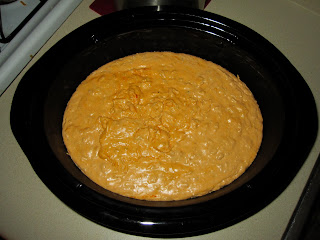 I served the dip with tortilla chips and celery sticks, although I've also heard of crackers, bread, and Fritos.  This dip really is so, so good!  I don't like very spicy things but can handle it when it's made for wimps.  It's terribly bad for you, so don't eat it without a gym membership!  Oh... you mean you need to go to the gym for that to be valuable?!

Every time I saw Bryce at his party, he was holding the lid to the crock pot in his hand while demanding that party-goers try the dip! He did a great job selling, about 97% of it was gone by the end of the party.  I'll let you guess what happened to the other 3% when birthday boy made it home!
Posted by Angela