Ever heard of a malasada?  Say it with me, it's just like it looks: mall-a-sawed-a.  Good job!

When I first moved to Hawaii I'd never heard of or eaten a malasada.  People would hear me say this and immediately panic.  "What!? You've never had a malasada?!"  No, I don't even know what the hell you're talking about.  They would describe the Portuguese baked good to me - some type of fried dough coated with sugar or cinnamon sugar or with filling in the middle.  It sounded a lot like a doughnut without the hole to me, and that sounded delicious!  Eventually I got to experience these wonderful treats and I was hooked.

I did a little research and found out that malasadas are made from balls of yeast dough, deep fried in oil, and then coated with sugar.  They're Portuguese and malasada (or malassada) means light-roasted.  Malasadas were originally made on Madeira Island, part of Portugal's archipelago (islands).  They were brought to Hawaii in 1878 by laborers who came here to work on sugar plantations.

Most of that information I just gave you (Portugal has Islands, deep frying, manual labor) is completely foreign to me.  Malasadas are something I'm relatively new to, although Ive just discovered that part of their tradition is actually something that's very familiar to me.  The reason malasadas were originally made was to use up the lard and sugar in your house before Lent, when luxuries like sweets are forbidden!  They were made and eaten on Fat Tuesday/Mardi Gras, before Lent began on Ash Wednesday.  Here in Hawaii, Fat Tuesday is actually declared Malasada Day!

Being Catholic, I can tell you all about Lenten sacrifices!  First of all - Catholics don't eat meat on Ash Wednesday or any of the Fridays during Lent.  Nowadays, you can indulge in luxuries like malasadas, although you can chose to "give something up" on your own for the 40 days of Lent.  My Mom gives up chocolate every single year!  I know people who give up alcohol altogether.  Being that my biggest vice is indulging in food, I usually chose something edible to test my dedication with.  I've given up fast food (including delivery pizza) once, "designer" coffees once, and french fries twice!  French fries are the hardest because you always find yourself trying to take just one from your friend's plate :)  Maybe next year I'll give up malasadas!

Leonard's is one of the bakeries here in Hawaii that's known for its malasadas.  Leonard's didn't just stick to traditional malasadas, they created the Malasada Puff (with filling inside) and the Malasadamobile!  They even have a store in Japan.

Now you know all about malasasas and their history, let's get to the drool-worthy photos!  We spotted the Malasadamobile recently while BBQing in Waikiki. 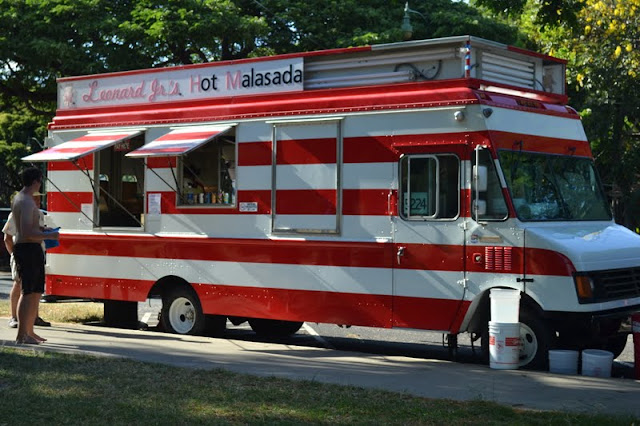 I always get the same thing, but was amazed by the many options available from the roaming truck! 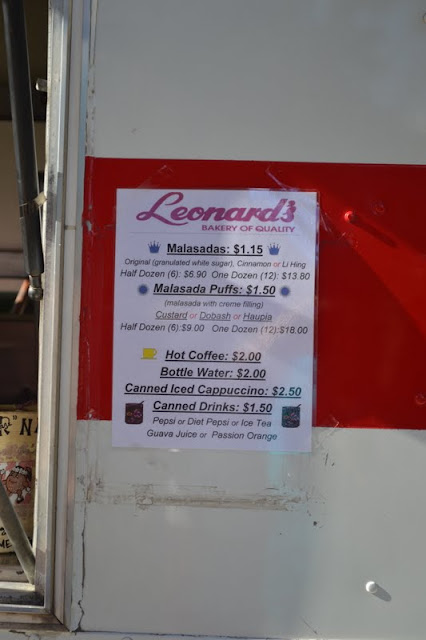 ﻿
Just in case you confused the Malasadamobile with the Weinermobile or the Batmobile, there's a little sign. 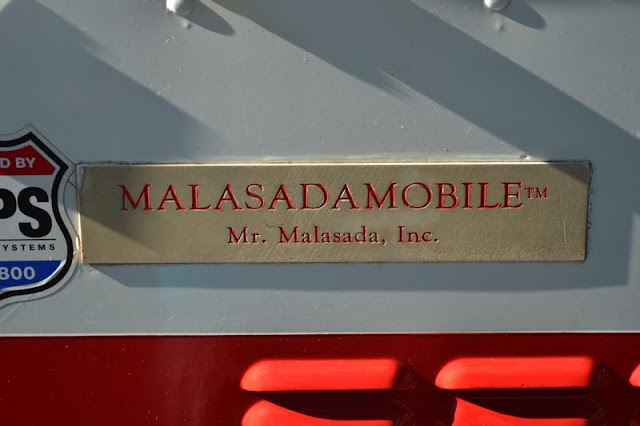 From top to bottom: a cinnamon sugar malasada, my favorite the li hing malasada (red), a haupia (coconut) malasada puff, and a custard malasada puff. 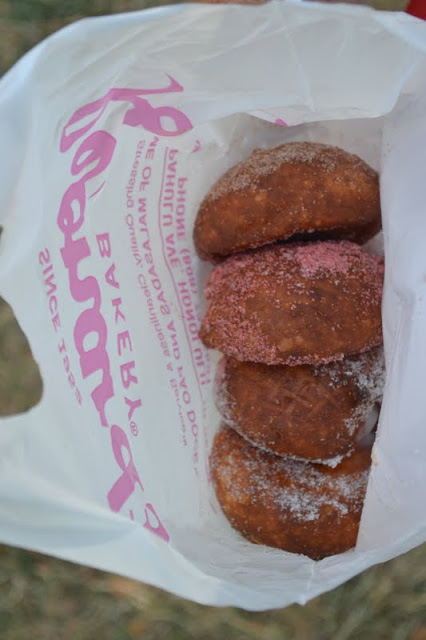 Christine's happy we caught the Malasadamobile! 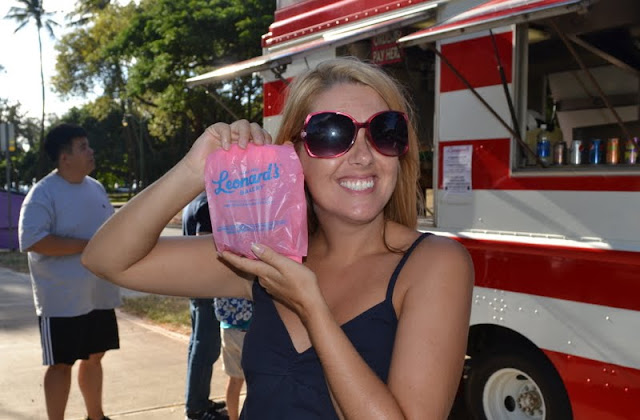 Two original malasadas for her!  Just kidding, she shared one with her husband :) 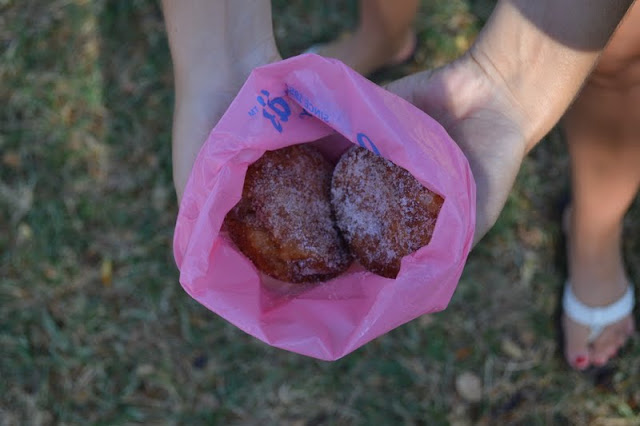 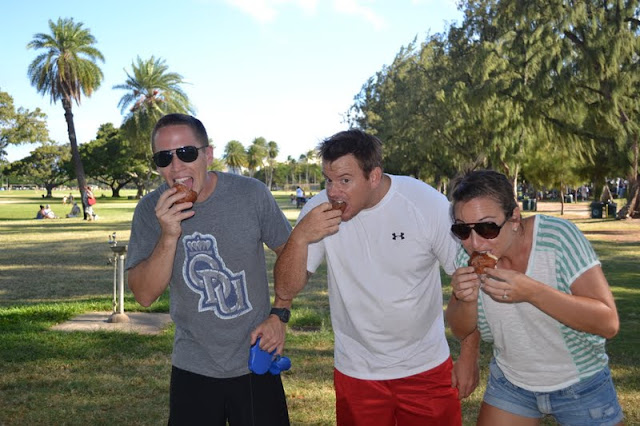 The inside of the custard filled Malasada Puff! 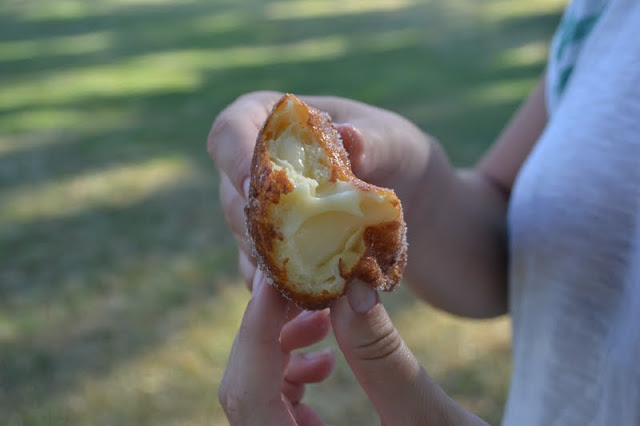 Here's a better look at my favorite - the li hing malasada (no filling).  Li hing is salty dried plum and it's turned into a powder.  The flavor is sweet, sour, and salty all at the same time.  I like this powder on apples, candy, on the rim of drinks, but the best way to have it is on a malasada! 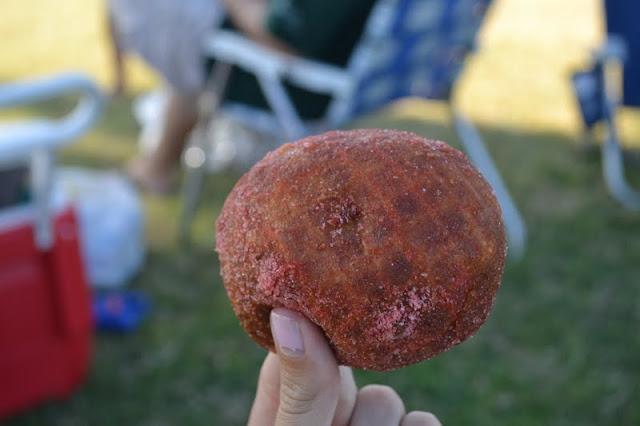 So, if you don't already have the desire to come visit me in Hawaii, these delicious malasadas should convince you to make the trip!  They're so good they'll have you begging for more! 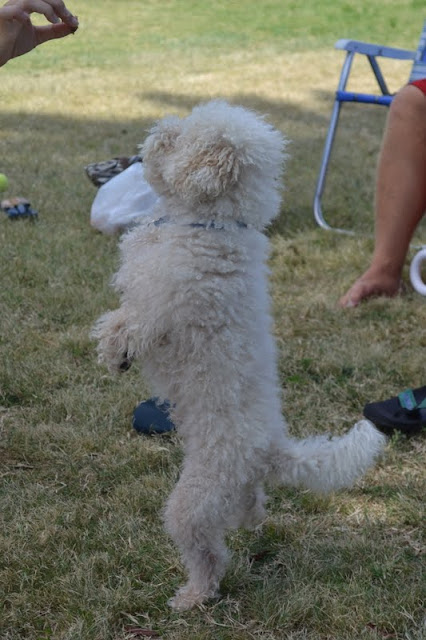