Christmas Eve Feast of the 7 Fishes

Just like that Christmas has come and gone again! Last December I was boasting that I'd never, ever missed a Chrismas back home in Pittsburgh and this year I spent my first away from my childhood home, celebrating the holiday at my other home in Honolulu with Bryce. Because it was a chance for beginning a tradition of our own, I got really ambitious and decided to host a Feast of the 7 Fishes, an Italian Christmas Eve right of passage.

Never before had I even been to a Feast of the 7 Fishes, although I'd heard a lot about the seafood oriented Christmas Eve meal. Among the many good things I'd heard, it's also rumored that the feast can be (literally) very stinky, involves lots of fried items like calamari and smelts plus salted baccala, and that most times the fishes are eaten as more of a tradition before everyone moves on to the other, tastier food! I was not interested in a stinky house, greasy fried foods, or cooking 7 fishes annnnd other meal items so I decided to do the feast in my own way with only desirable menu items!

Our Christmas Eve went perfectly! Nine people squeezed into our apartment and each dinner course was better than the next. We had enough food to feed our entire street and if any of our neighbors are allergic to fish they may have died from anaphylaxis by proximity. Now that the pounds and pounds of leftovers have been eaten or thrown away, I suppose it's time to share our meal with you!

Our Feast of the 7 Fishes Menu﻿

For our Monday evening feast, the grocery shopping took place on Friday night at both Sam's Club and Safeway. Cooking began on Saturday with both of the pasta sauces: tuna and tomato sauce (5) and clam sauce (6).﻿ To accommodate the extra large can of tomatoes, first, and 9 guests, second, I doubled the recipe for the marinara. 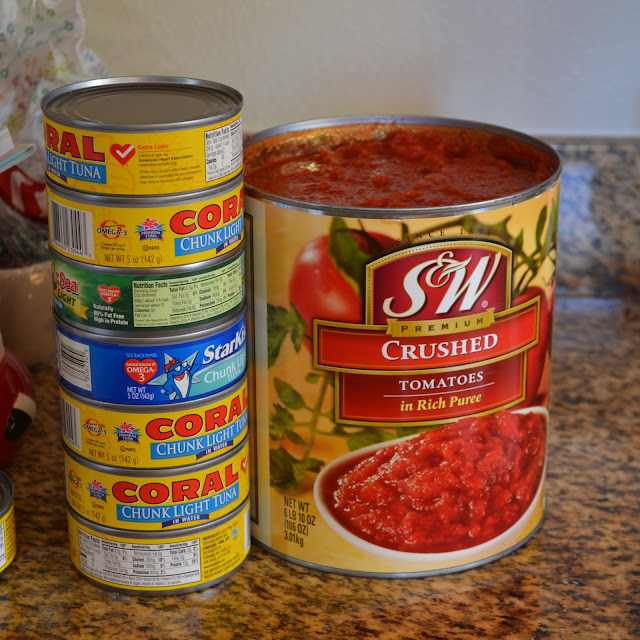 ﻿It took quite a bit of adjusting recipes (as the tuna sauce recipe is only for a 3 cup serving of marinara sauce), opening cans, and chopping veggies before the actual cooking got started. Thankfully we had a brand new sharp knife to break in, thanks to our Williams Sonoma shopping spree! 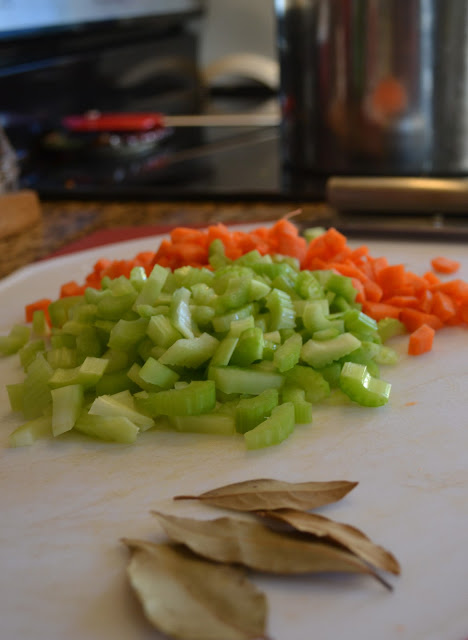 Keeping the process simple by cooking in phases over Saturday, Sunday, and Monday was obviously a santity saver for me, plus sauces are always better when they're not just made, right?!

a combination and adaptation of Giada's marinara with her tuna and tomato sauce
Makes enough for at least 9, but actually more like 15

Begin by sauteeing the onions and garlic in a very large pot over medium high, until they're translucent - for about 10 minutes. Add the celery, carrots, salt and pepper, and cook for another 10 minutes until they're soft. 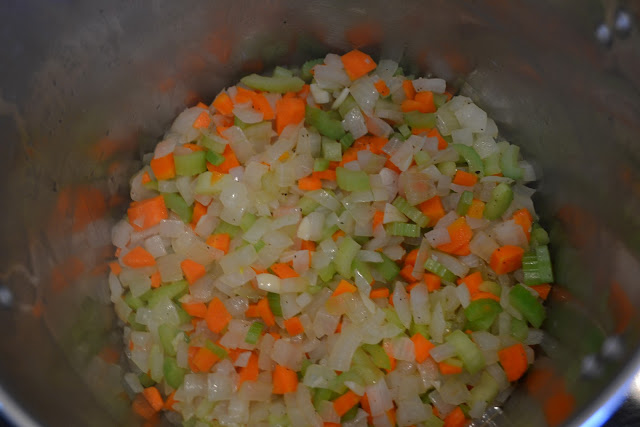 Add the tomatoes (gently to avoid looking like a murder victim!!) and bay leaves, then reduce the heat to low and simmer uncovered for at least an hour, stirring often. Once the sauce is thickened to your liking, remove the bay leaves and add tuna, capers, and lemon zest. Break up the tuna and stir to combine all. Add parsley to your liking and more salt and pepper, if needed. 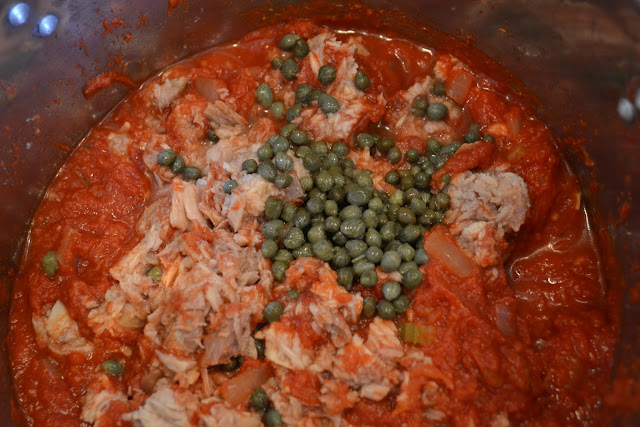 The tuna and tomato sauce was finished! Do you need a break? Go for a walk, make a snack, have a glass of water, tea, or wine! I'm still here when you're ready to move on to the next sauce...

In a large pot combine the olive oil and butter until melted and combined. Add the onion and garlic and sautee. Add crushed pepper, clams, juice, basil, and parsley. Pictured below are the clams without the juice, for no good reason at all! The juice was added just a minute later. 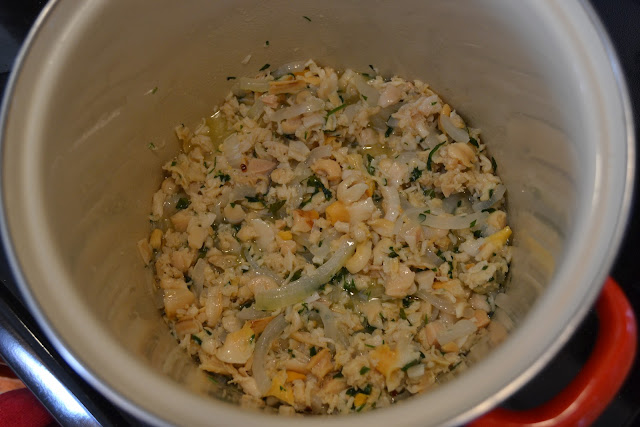 Simmer for 5 - 7 minutes and the clam sauce is finished! Both sauces were kept in the fridge until Christmas Eve mealtime. I reheated them and added one cup of pasta water to each before serving with their respective pastas.

Not too much cooking happened on the day before Christmas Eve, just lots of potato scrubbing, mushroom de-stemming and cleaning, and tidying around the house! Finally, Christmas Eve arrived.

The only 2 store bought fishes were the ahi poke (1) and shrimp cocktail (2) and, unfortunately I didn't get a picture of the poke. [Ahi poke is cubed, raw ahi tuna that's been marinated with shoyu (soy sauce), salt, onions, and other items. It's 100% delicious and one of the best unique food items of Hawaii.] It's not Italian, but I make the rules for these 7 fishes! 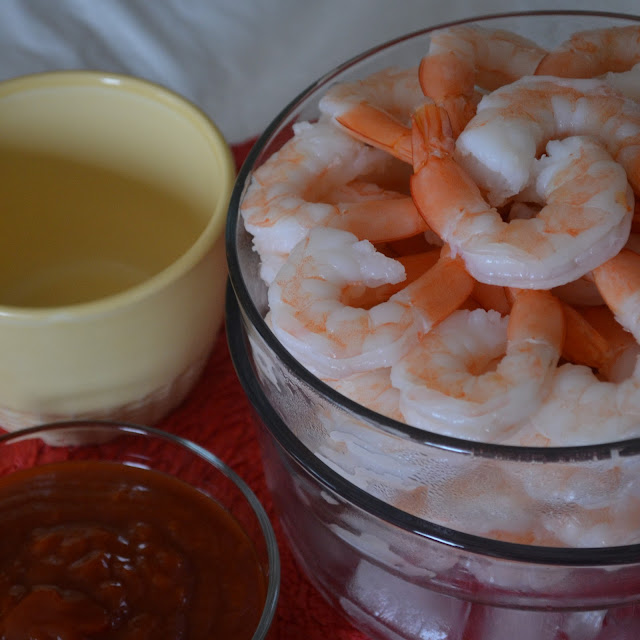 In addition to the 2 chilled appetizers, the third and final "pupu", as we say in Hawaii, was a hot one: crab stuffed mushrooms. 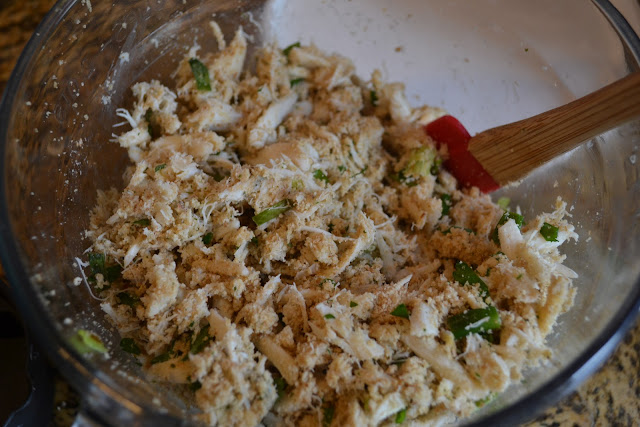 Ingredients
2 pounds of medium fresh mushrooms
6 chopped green onions (both the green and white parts)
1/3 of a cup of butter
1 (16 oz) can of lump crab meat, drained
1 cup of plain breadcrumbs
3 - 4 tablespoons of crumbled blue cheese
2 teaspoons of fresh parsley, chopped
salt and pepper to taste

Clean mushrooms and remove the stems. In a large skillet, saute the green onions in butter until they're tender, or for about 5 minutes. Mix the crab, breadcrumbs, blue cheese, and parsley in a large bowl. Once the onions are finished, incorporate the onions and butter to the crab mixture and stir to combine. Add salt and pepper, then stuff each mushroom with the mixture.

Place the stuffed shrooms on a cookie sheet and bake at 450 degrees F for 20 minutes, or until the mixture is just slightly golden brown. 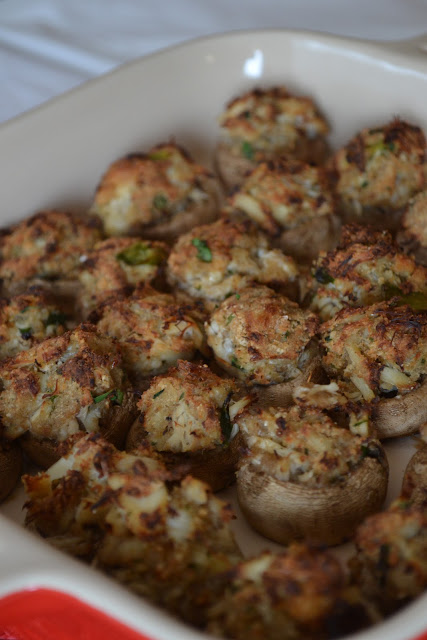 Our day was laid back and relaxed, just the way I'd hoped it would be. Not unlike our Easter dinner of 2012, we spent time chatting, drinking wine, and relaxing between courses.

After appetizers, up next were bread, salad, and soup. That sounds pretty standard and Olive Garden lunch-y, although ours were anything but expected. My friend Candace (who also blogs at Journal Femme) made homemade rosemary olive oil rolls! They were so, so delicious and fresh and the salty tops made them perfect. 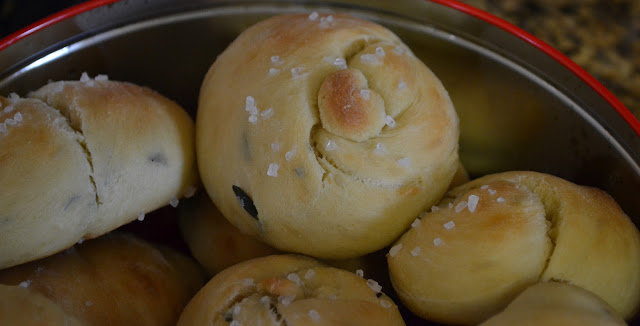 She also made a salad with persimmions and goat cheese - yum! In addition to 2 wonderful dishes that were a fantastic break from seafood, Candace and her husband Don also brought a delicious bottle of wine and a very sweet hostess gift for me :) Orrrrrrrrrrr was the bubble bath for Bryce?! 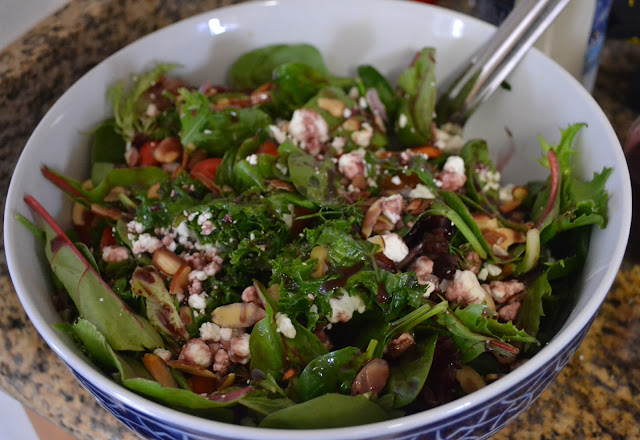 Our soup was clam chowder (4) made in the crock pot! I got started on it first thing on Christmas Eve morning and it took no additional prep throughout the day. It was creamy, but not too rich, and the potatoes and clams made it very hearty.

Ingredients
51 ounces of minced clams with juice (That's just 1 Sam's Club can! A similar quantity will be fine.)
1/2 of a pound of bacon, cooked and crumbled
1 large onion, chopped
8 red potatoes, cubed
4 cups of half and half or milk or a combination of the two
3 tablespoons of cornstarch
salt and pepper
chopped fresh parsley

To the slow cooker, add clams and juice, onion, potatoes, salt and pepper. You can add the cooked bacon at this stage, although we had a few fish-but-not-meat eaters so we served it on the side. Cover and cook on high for 3 hours. Combine half and half and/or milk with cornstarch and add to the crockpot. Cook for 1 more hour. Serve with chopped parsley and oyster crackers! 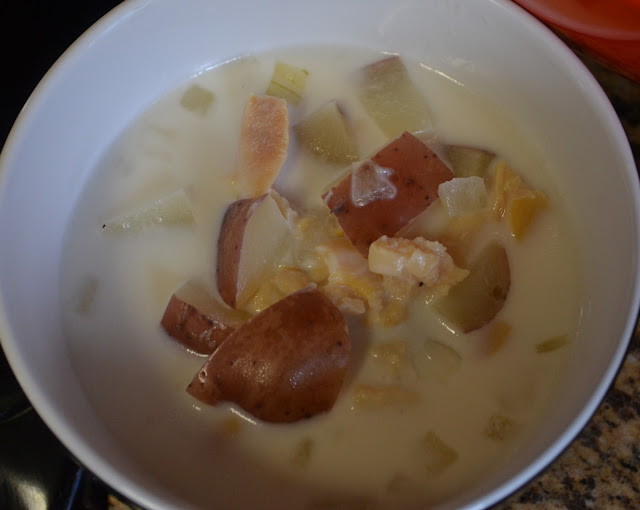 We cooked both spaghetti and penne just before dinner and incorporated sauces on each. The spaghetti with clam sauce was ﻿light and decadent! 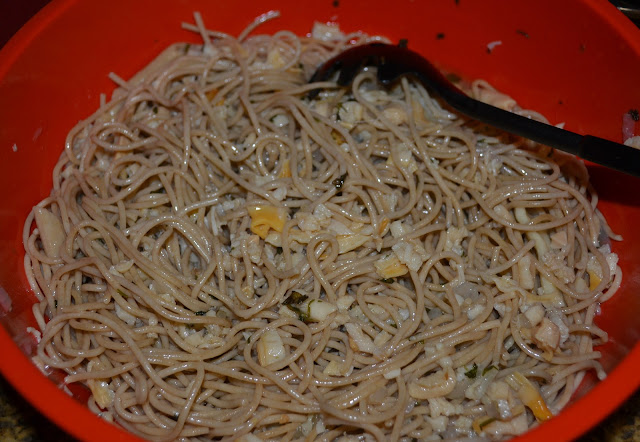 The tuna and tomato sauce with penne was a stark contrast and the hearty, salty sauce and short noodles made a fantastic fork-full! 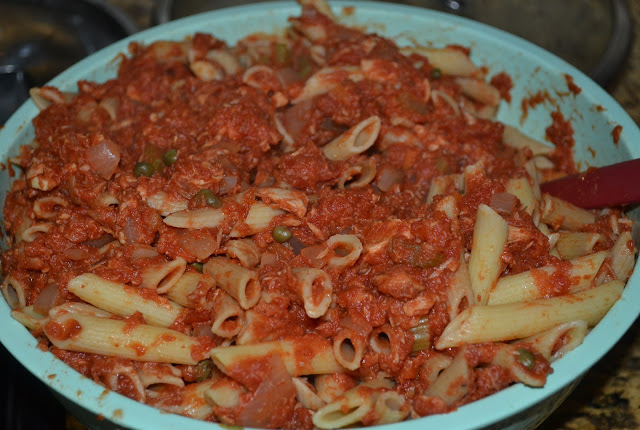 Our last and final fish was the grilled flounder with oranges and dill. Bryce snuck outside to grill them just before our final dinner course was served. A stand alone photo of the grilled fish wasn't taken, although this was my lovely dinner plate! I save my salad for last, always. 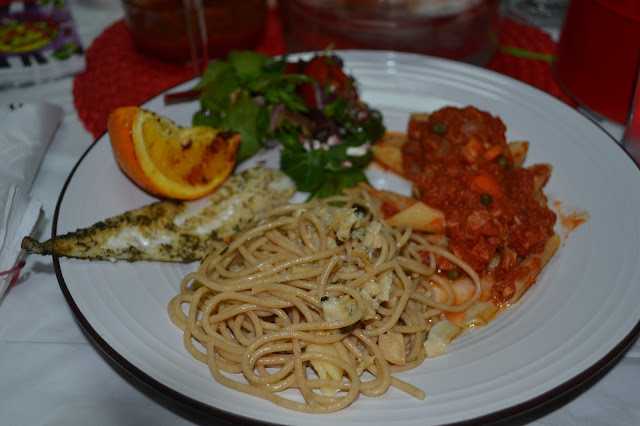 Our dinner was FANTASTIC! It took many hours of prep and it all paid off when we enjoyed a great day and supberb meal with our friends. They kindly obliged for my group photo request! 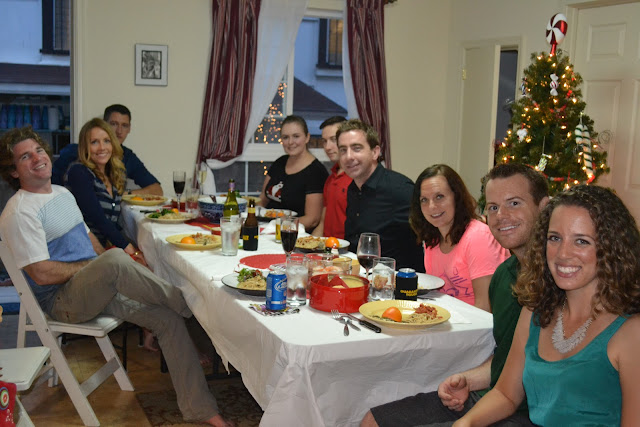 After eating more food than we could imagine, we enjoyed another great Hawaii food offering for dessert: Ted's chocolate haupia (coconut) cream pie! The rest of the night was spent relaxing and sipping wine... 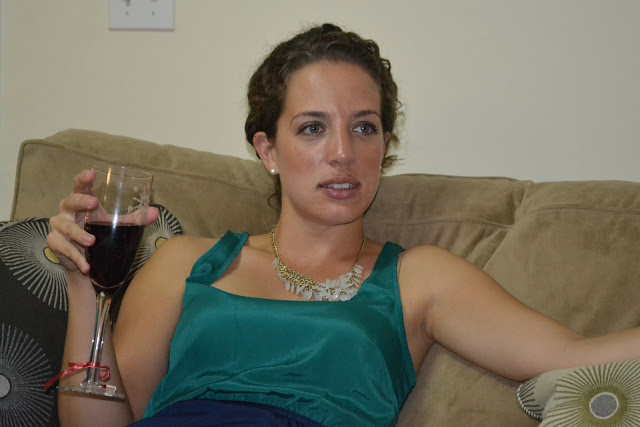 ...until it got really competitive with a few rounds of Apples to Apples! Ugly Christmas sweaters were 100% optional. 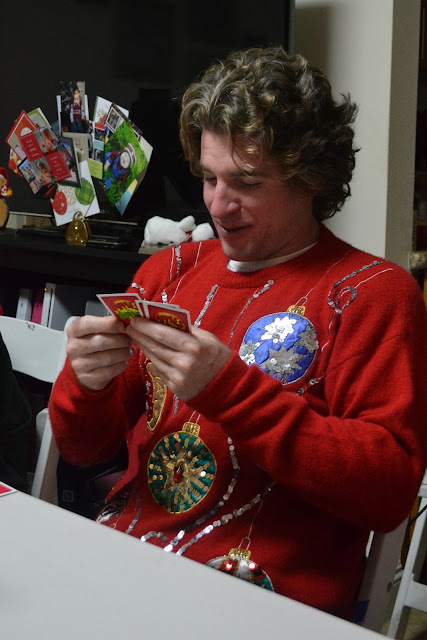 Overall our Feast of the 7 Fishes was perfect! Everyone contributed in some way. We had Italian dishes, Hawaii-local dishes, and only tasty and decent smelling seafoods! 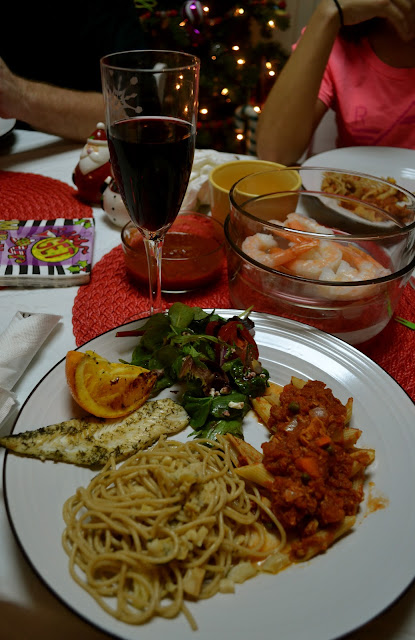 If I'm ever the host on Christmas Eve again, I'd probably try it again in order to top this Feast of the 7 Fishes! It won't be easy but it will be delicious :)