Mangia Mangia in the Motherland

We are on our first flight of our honeymoon trip as I'm writing this, from Seattle to DC. After a brief layover and some airport dinner (my expectations are low) we will be off to Italy and landing in Rome! We've collected, borrowed from the library, and been given many travel books surrounding this adventure and I've taken plenty of notes. Thank you Catholic School eduction! Most notes are regarding what to eat. You're shocked, I'm sure of it. 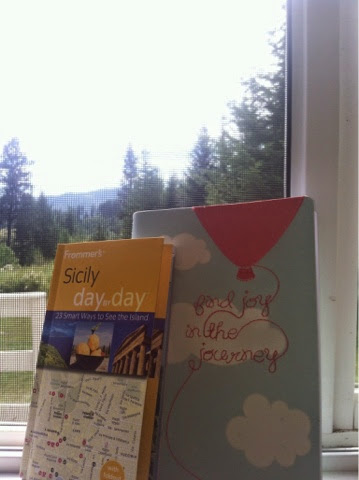 During our visit in Idaho I spent several hours relaxing in the sunlight jotting down the best tid bits of the many, many books.

I'm making a little bucket list now to share with you, with hopes that later I'll able to come back and update what the foods were like in comparison to my expectations, as well as add the other scumptious grub that took me by surprise!

We're staying in Rome for three days and my plan of attack is broad - every and anything we can find! There's no specific items on the list, although I'm obviously hoping for tons of gelato, pasta, and wine.

We're there for just one day and it's the birthplace of pizza. 1 slice (or square, right?) of each kind please! It's my understanding that the pies will be more traditional, although I'll try it all.

There's a place called Pizzeria Bellini where they cook spaghetti and seafood together in parchment, but will we be too full from the pizza? CARBS on carbs on carbs.

We're taking a ferry from Naples to Sicily, arriving in the early morning and beginning a cooking class just a few hours later! If this sounds like something I've done before - booking a foodie adventure just after landing - that's because it is. Our class meets at the market and we've been instructed not to eat breakfast and expect to drink wine! Will I return to America thinking that we're way too uptight about life? I'm sure of it.

The highlight of the markets is said to be the fresh, island seafood. A couple types are served in cones: gameberetti fritti, fried shrimps, and calamaretti, tiny squid dusted in flour and fried, topped with lemon. I've read not to miss the pesce spada, swordfish swords, and tonno, tuna steaks.

Then there's pasta con le sarde: sardines, pine nuts, saffron, raisins, wild fennel, toasted breadcrumbs, and anchovies served with pasta, usually bucatini. Did I lose your interest at sardines? How about anchovies?! As I type this I realize I can't tell my husband what it is before he tries it, MUAHAHA.

Another famed market snack is the pannelle, chickpea fritters with lemon.

I mean, really, can we go wrong? It's where cannolo (cannoli? I'll let you know.) was invented!

Pasticceria Capello is a cake shop known for its divine sette veli (7 veils) chocolate, a decadent chocolate cake with 7 layers ranging from dark to white chocolate and textures from crunchy to soft! To think that boxed cake mix even exists after typing that makes me giggle.

The marzipan is also pretty hyped up in Sicily with many varieties, even a few with names that will make you giggle and/or blush. Minni di vergini are named for virgins' breasts and fedde delle cancelliere for chancellors' buttocks!

After our week in Italy we jaunt over to Ireland. I'm not as prepared for eating there, although I've heard great things about Irish breakfasts homemade by the keepers of quaint, country bed & breakfasts. There's also Jameson and Guiness, I've heard :)

As my Dad always says "I eat like I'm Italian and drink like I'm Irish!" This trip will likely prove just that and I look forward to sharing my adventures with yinz. Mangia mangia!
Posted by Angela