Let's talk about Sam's Club for just a moment... I love Sam's! I can go in there for one thing and walk out with a cart full of stuff and end up spending $120. The only issue is that I can't eat the produce fast enough and some of it usually ends up rotting away in the bottom drawers of the fridge.  Not. Cool. HAHA fridge joke!
Last week I bought a huge container of mushrooms and wanted to find a way to use them all before we had any mushroom casualties. I consulted my sous chef, Better Homes and Gardens Cook Book, and she suggested I make Chicken with Mushroom Stuffing in the slow cooker.
Disclaimer: This recipe is not one of those quick crock-pot recipes, there's a lot of prep involved before it goes into the cooker so make sure you have some time!
Slow Cooker Chicken with Mushroom Stuffing
from BH&G Cook Book with many adaptations of my own
Ingredients:
1 crock pot liner
I love these things and once you use them you can never go back to living without!
2 tablespoons finely shredded lemon peel
1 tablespoon poultry seasoning
1 tablespoon seasoned salt
1 1/2 teaspoons black pepper
4 boneless skinless chicken breasts
I'd recommend using more chicken, our stuffing to chicken ratio was way off.
8 ounces quartered button mushrooms
3 cloves of garlic, thinly sliced
1/4 cup butter
1 sourdough baguette, cut into 1-inch pieces
2 cups shredded carrot (2 large carrots)
1 can of chicken broth (15 or 16 ounces)
1/4 cup chopped walnuts
1 1/2 tablespoons dried parsley
Never before have I used a food processor to shred anything, it's great! The 2 ginormous carrots were shredded in no time and none of my fingers were injured. 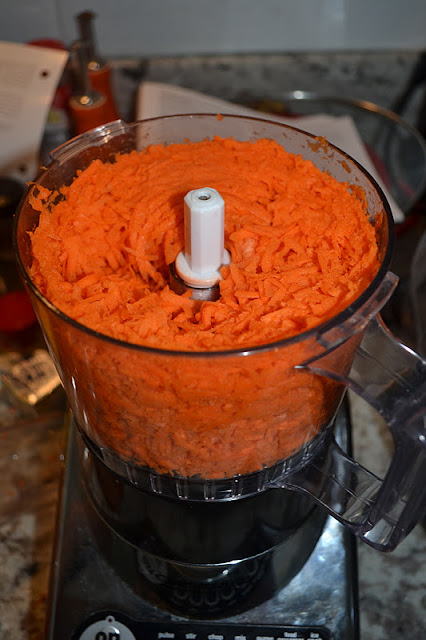 Start by putting the slow cooker liner inside the pot.  Combine half of the lemon peel with the poultry seasoning, seasoned salt, and pepper. 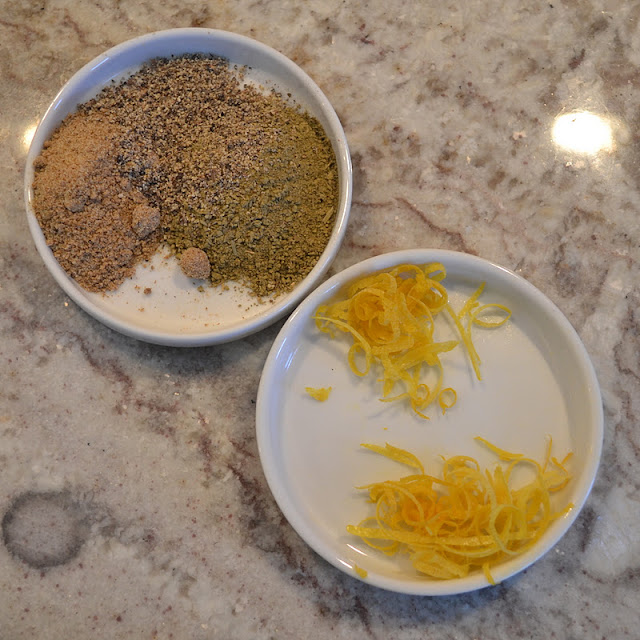 Use 3/4 of this mixture (reserving the other 1/4 for later) to rub on the chicken.  Then place it in the cooker. 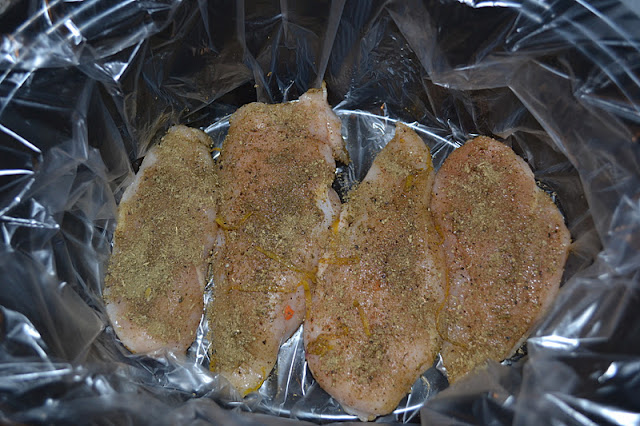 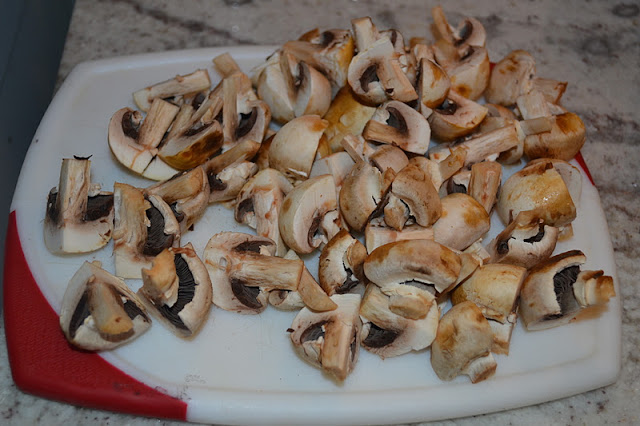 ...and cook them in a large skillet over medium along with the butter and garlic. 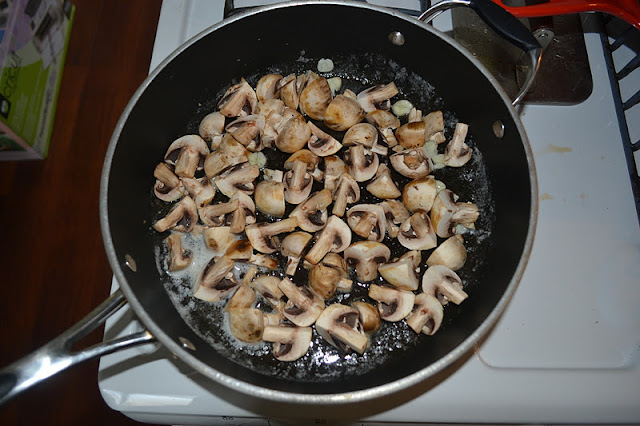 Do this for about 5 minutes until they're just tender.  Stir in the remaining mixture of poultry seasoning/seasoned salt/pepper/lemon. 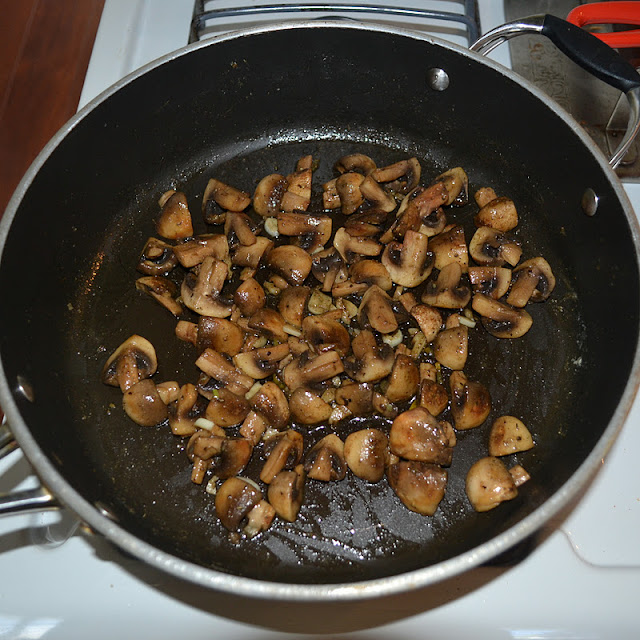 Now that baguette - cutting into pieces is pretty tedious but it needs to be done! 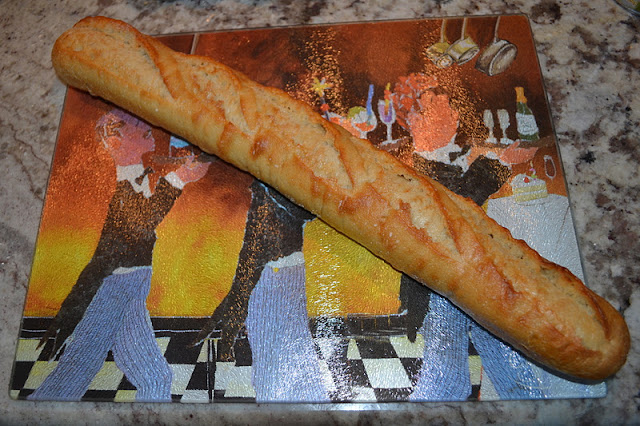 Despite the adorable-ness of that cutting board, it makes a blood curdling noise when a knife touches it and it made the process even worse. 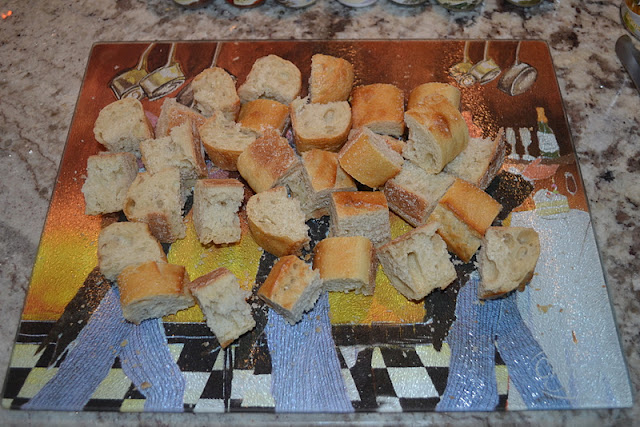 Take your baguette pieces and mix together with the... 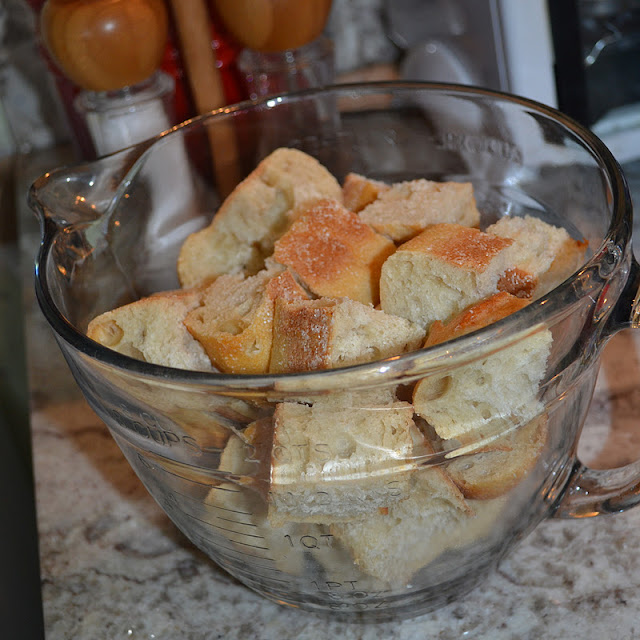 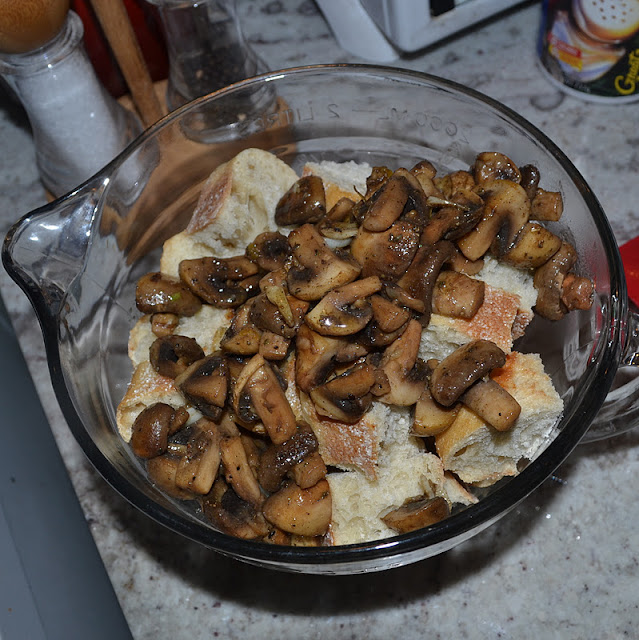 ...and the carrots.  Oops, that bowl is way too small! 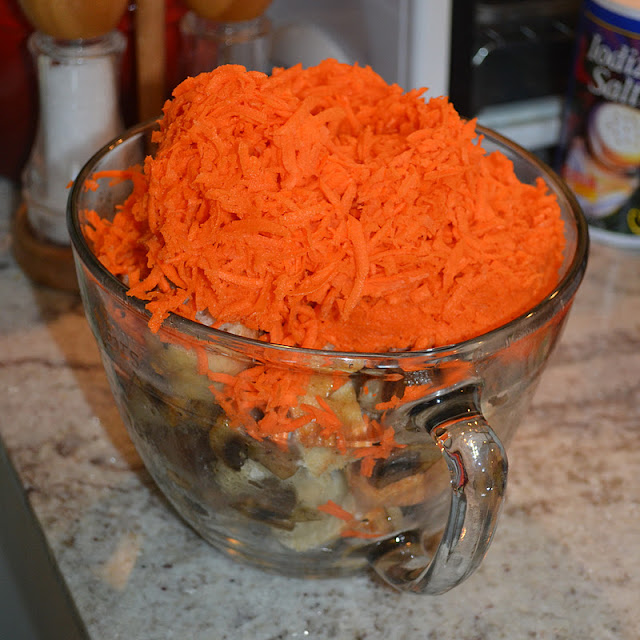 Put the mixture back into the pan and mix there, where there's more space :) Drizzle with broth and toss to combine. 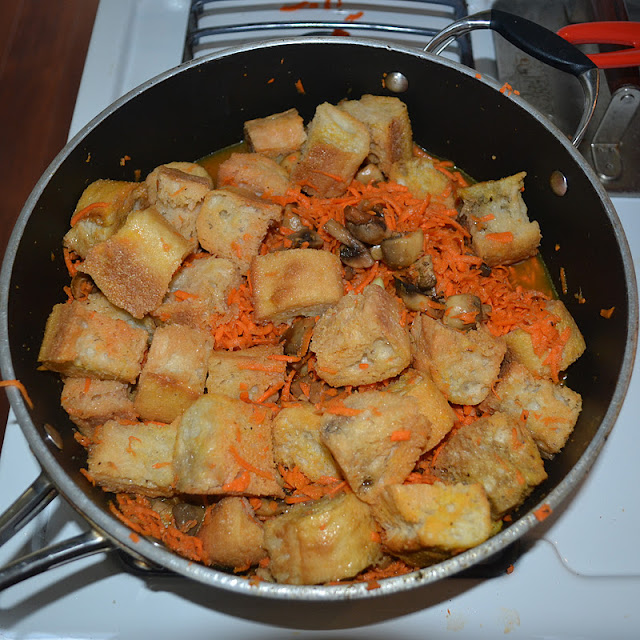 Pack the stuffing on top of the chicken in the cooker and turn that baby on!  The recipe calls for 4 to 5 hours of cooking on high, but surely you can turn it on low for a longer period of time if that's what your schedule allows. I cooked ours on high for 4 hours. 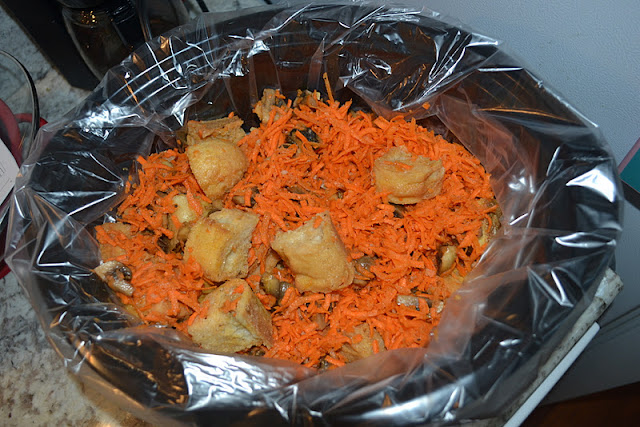 But wait, you're not done yet... I warned you! You need to toast the walnuts. [Spread them on a cookie sheet and bake in a 350 degree oven for 5 - 7 minutes. Keep your eye on them, they'll burn quickly and can't be salvaged.] Then, mix the walnuts, the remaining lemon peel, and parsley. The warm, toasty walnuts wake up the lemon peel and parsley and this little mixture really smells amazing. 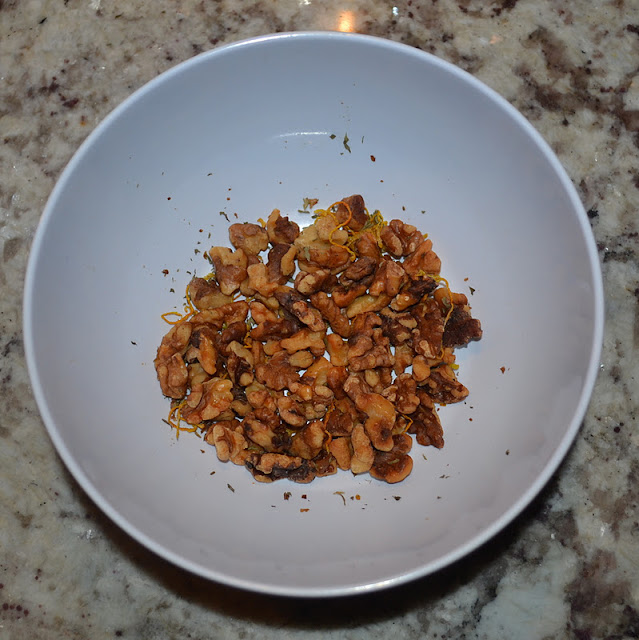 Now, go about your day in peace knowing that dinner's waiting for you at home.
When it's go time, top the dish with the nut mixture and serve! 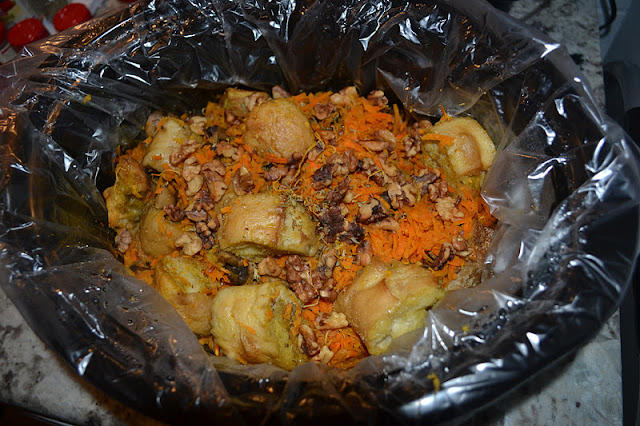 This dish has a very comforting and cozy feeling to it and it tastes great. Our baguette pieces could have been a little bit smaller and this would be a great way to use up any type of stale bread since the broth moistens the stuffing. The chicken was tender and very flavorful.

This dish is pretty intense compared to most slow cooker recipes. I'd say use a slow cooker liner and serve it on paper plates and you have 0 cleanup work to do! Or, just kindly ask your boyfriend do the dishes since you cooked :) 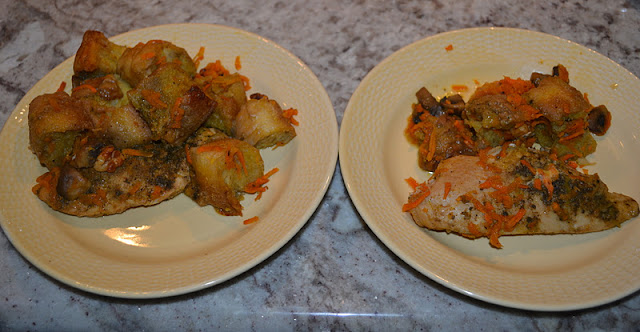 I bet making this with turkey and adding dried cranberries would be like a mini-Thanksgiving dinner! I'll let you know if I try that, you promise to let me know if you beat me to it?
Posted by Angela