Back in September I found an amazing online coupon offer: a $100 gift certificate to Chef Mavro restaurant for $50!  I bought it immediately with "our Christmas dinner" in mind.  Since Bryce and I don't spend Christmas together we usually go out to a fancy dinner before we part for the holidays.  I didn't know too much about Chef Mavro, although I knew I wanted needed to go there!
After some research I found out a few things:
It was supposed to be a surprise to Bryce, but I couldn't hold in my excitement and told him we were going and that I'd pick up the first $100 if he'd pick up the rest of the tab!  He agreed and for the past few months I've been studying the menu and anticipating this wonderful meal.  This week was our big night!  So we got all dressed up and posed by the tree (pause for AWWWWWWWE moment!) 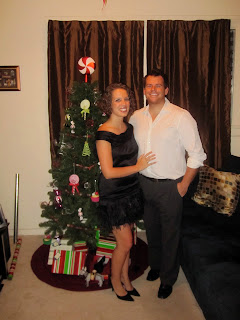 I was a little nervous because the restaurant was so fancy and we were clearly the youngest people there, but once we got settled in I was so excited and happy!  Since the wine pairings would have set us back another $100 and nobody agreed to pay for that we each ordered just one drink - I had chardonnay and Bryce had a rum and coke.
We'd already decided what we wanted to order long before we arrived but we pretended to look at the menu for a while, then told one of our many helpful hands/waiters/men with water refills what we wanted - the 4 course menu, mine as-is and Bryce's with lamb instead of pork.
First came the soup, which I hadn't expected because it's not on the menu, but it was a welcome surprise!  I don't know exactly what was in it, definitely apples, then spiced carrots and almonds on top.  Very good! 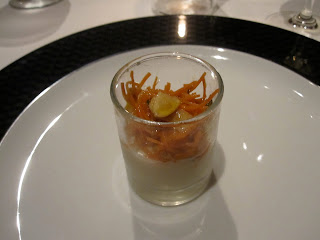 Course 1:  FRESH ISLAND SHRIMP dusted with garam masala, sour cream emulsion flavored with espelette chervil, hearts of palm-green apple remoulade.  This was good, but once the shrimp was gone those little squares were hard to get onto your fork in a polite way - damn fancy restaurants!  We didn't eat the gross heads, I don't think you're supposed to, though.  This was very good, but my least favorite of the night :) 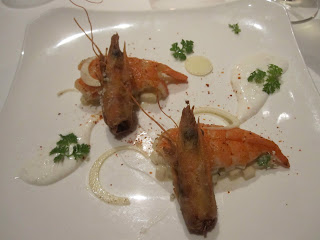 Course 2: DAY BOAT CATCH BOURRIDE "MODERNE" medallion (ours was red snapper, although the table next to us got something else with a larger course menu) poached in bourride, leek and onion étuvée, aïoli sabayon sea asparagus tempura.  This was delicious!  The snapper was so moist and flaky I didn't even need to use my knife.  My favorite part was the crispy sea asparagus tempura and the foamy sauce. 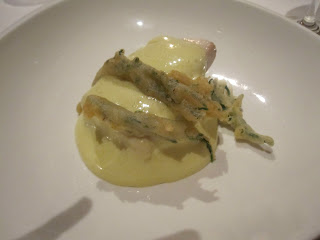 Course 3 (for me):  KUROBUTA PORK "A LA SAIGON" loin wrapped with betel nut leaves, green papaya-cucumber-tomato on crispy shank wood ear mushrooms, lemongrass pork jus, lemon oil.  So so yummy!  The flavor was like nothing I've ever tasted before.  The little side dish (on the right) was great, too, those papaya-cucumber-tomatoes gave it such a fresh flavor and the bottom, which I assume was pork too, tasted like bacon!   The sauce was delicious and if I wasn't in a fancy restaurant I'd dip my bread in it and get every last drop :) 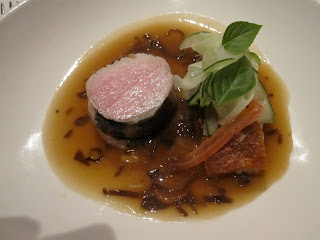 Course 3 (for Bryce):  COLORADO LAMB "PISSALADIERE" with charred big wave tomatoes, lamb bacon anchovy, garlic chips, caramelized fennel and onion black olive powder, American parsley oil, lamb jus.  I didn't really care for this dish, and Bryce didn't care for mine, so it worked out perfectly!  He loved the lamb and ate every last bite of it, but thought it could have been cooked for just another minute.  Those little tomatoes were FABULOUS. 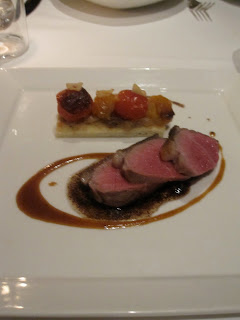 To cleanse our palates we had these fancy little honeydew melon and mint gelatin things.  They were so refreshing :)  The best Jell-O you've ever had. 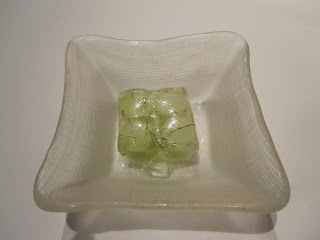 Course 4: LILIKOI MALASADAS guava coulis, pineapple-coconut ice cream.  This was the part I was more excited for and was most definitely the best part of the meal, as dessert usually is.  The ice cream was better than Dole Whip!  The malasadas were so light and delicious and the lilikoi inside of them paired with the guava in the sauce and the pineapple-coconut ice cream brought a perfect amount of fruity flavor to the sugary sweet dessert.  It was perfection. 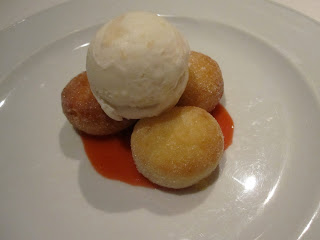 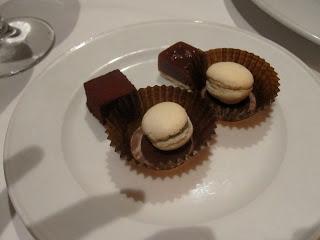 I was thrilled to meet and get a photo with Chef Mavro!  I even spoke Greek to him - yassou - which means hello, is the only word I know.  He was excited to hear it and it was a great conversation starter, even though I don't actually speak Greek, but he doesn't either so it was funny!  He was very nice and if we can ever afford to go back to his wonderful establishment we certainly will! 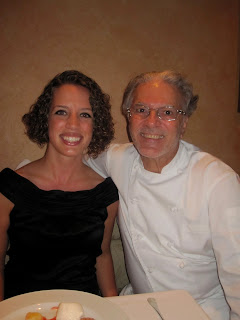 Happy and full after our fantastic dinner, Merry Christmas! 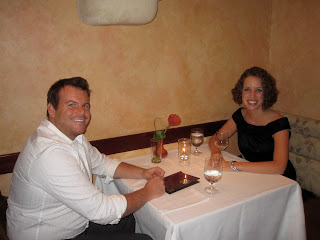