From preschool to my senior year of high school I went to Catholic schools.  First Elizabeth Seton Elementary School (ESES baby!) then Our Lady of the Sacred Heart High School (OLSH).  When I was very young, I thought there were 2 types of religions - Catholic and Public - based on the school systems!  So for 14 years I wore uniforms, tucked my shirt in, tried to wear my skirt shorter than my fingertips, hid my gum chewing, stood up and greeted my teachers with "Good Morning Mister/Miss/Sister ____", took religion classes, went to mass once a week, learned all about Catholic guilt, etc!  It was certainly a great way to grow up, although sometimes those religious fanatics, and their 8 bothers and sisters, can get kind of annoying :)
Finally, at age 18, I made it to Penn State for college where I was introduced to so many people with varying religious beliefs, lifestyles, etc.  It was a welcome change from the bubble of Catholic school.  One of the funniest memories of that year was when my roommate at the time asked me why people's foreheads were dirty on Ash Wednesday!  Try explaining that one to someone with no religious beliefs without sounding nutso...
One of my dearest friends, Jessica, is Jewish, mazeltov!  We lived together senior year and even threw a "Christmakkuh" party with red cups for Christians and blue cups for Jews, a Christmas tree, a menorah, and dreidel spinning!  We tried to convince our hovering landlord that it wasn't a party, but a religious gathering - HAHA!
So this year I decided to celebrate Hanukkah in honor of Jess with a traditional Jewish meal, latkes!  Better known as potato pancakes.  I followed a combination of latke recipes so I'll just go over the basic steps.  They were delicious - Happy Hanukkah!
Prepping for the latkes - taters, grater, water bowl... 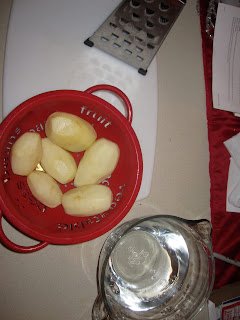 Once the potatoes are grated let them soak in the water, then drain them and put them and the chopped onion into a dish towel and SQUEEZE out all the water. 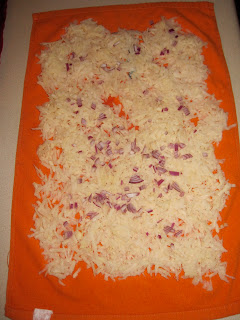 Mix the potatoes and onions with egg in a large bowl, then portion into little pancakes and cook on the stove top. 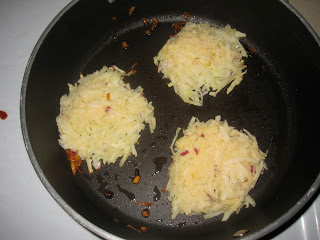 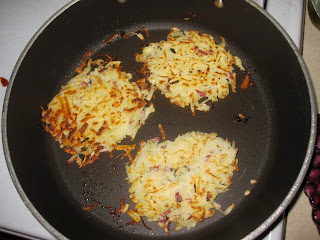 We had ours with sour cream, but applesauce is kosher, too.  (Pun intended!) 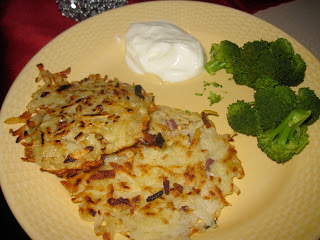 We added broccoli for a side and it was a great little meal!  There were leftovers from dinner.  When I went to gobble up the remaining latkes for breakfast the next day I found only one...  Bryce had gotten to them first for a midnight snack!
Maybe I'll try something a little more exciting/challenging for the next Jewish holiday!  Jess, just let me know when that is and what I'm supposed to make :)
Posted by Angela