After posting this week for the first time in 2 months, I think I'm back in the groove of blogging!

Please excuse my absence. We moved, I started a new job, Bryce graduated from college, both of our parents (and his brother) visited, we spent a week on the North Shore, and a weekend on the Big Island! I have a lot to tell you about. For now, here's what was for dinner the other night: Bacon and Kale Pizza!

Begin with the oven set to 400 degrees F, pour a glass of wine, and place your (peppered) bacon on a wire rack over a cookie sheet. Rather than buying a pound of prepackaged bacon (and leaving half to spoil in the fridge) I got just 4 slices from the deli and it was so much better! Bake until the bacon is crispy to your liking. Remember that it's going back into the oven again so don't over do it. 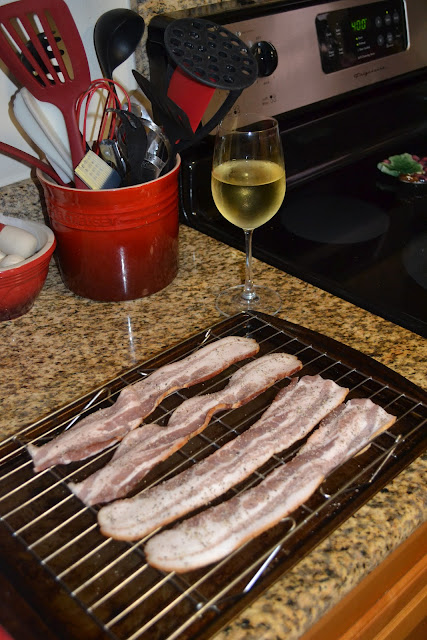 This recipe was inspired by one found in the May 2012 Everyday Food mag. 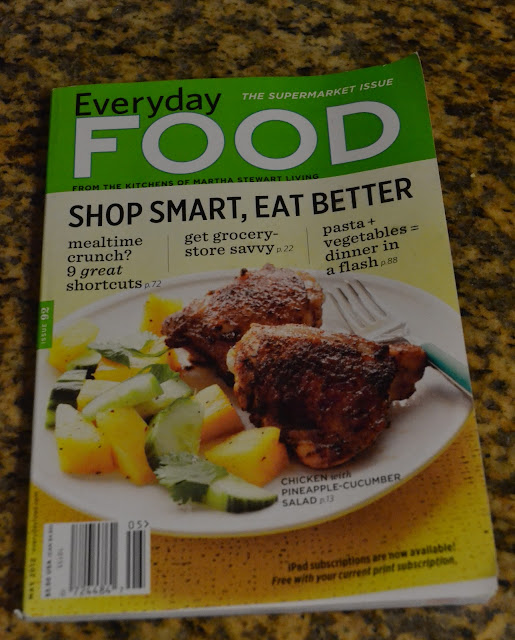 It started as bacon and escarole pizza, but because I got an abundance of extra large dinosaur kale at the Farmer's Market, the escarole quickly became extinct. HA, dinosaur jokes! 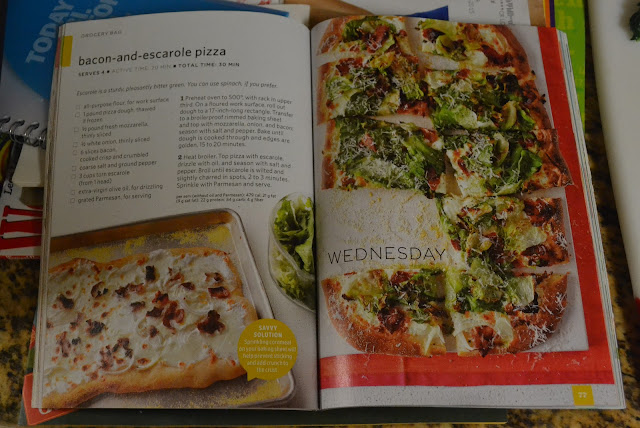 Safeway sells a 1 pound bag of pre-made pizza dough and it is excellent! Ours was white whole wheat. 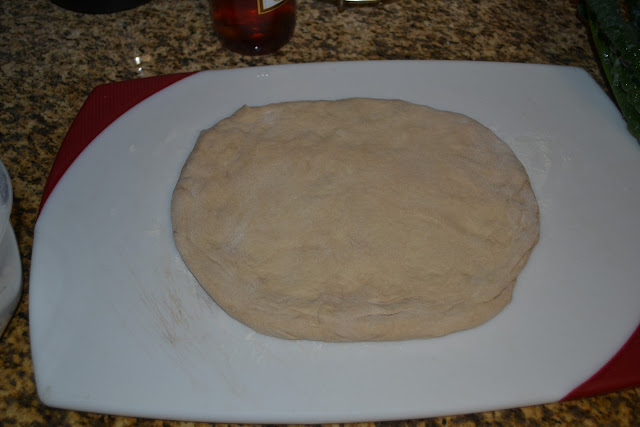 Be sure to prep the flat surface and your hands with flour to avoid sticking to the dough. Can you believe that I don't have a rolling pin?! Some plastic wrap and a wine bottle will do for rolling out the dough. I'll have this bottle of wine forever... or until someone who likes White Zinfandel comes over! 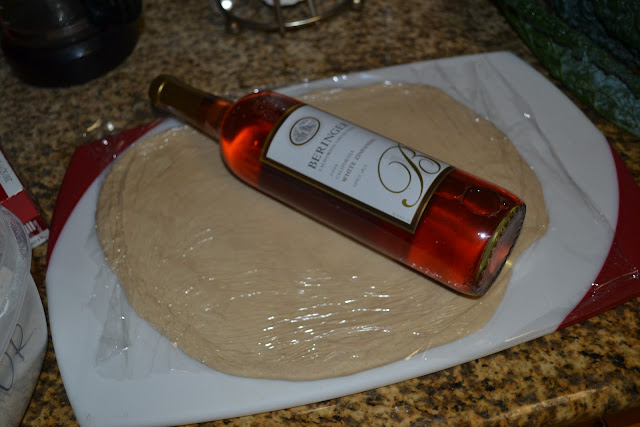 My trusty baking stone was ready for this challenge. Start by topping the dough with mozzarella cheese and thinly sliced white onions. HUGE kale standing by! 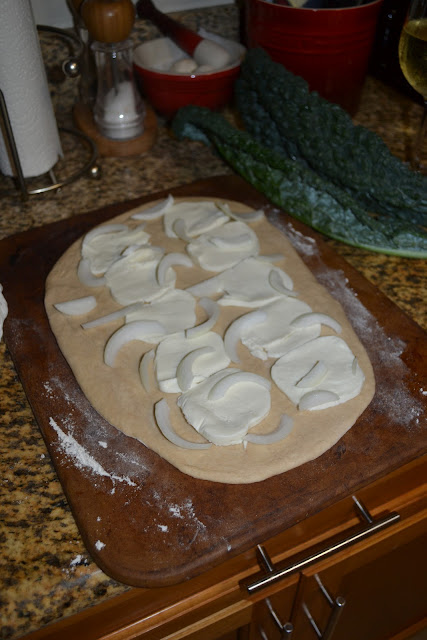 Once the bacon is finished, let it cool slightly before chopping. 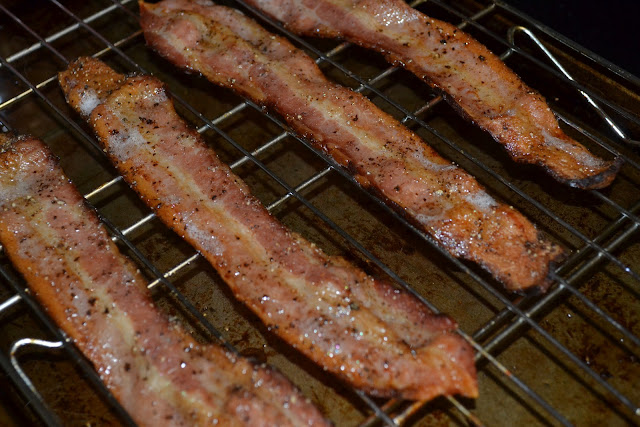 Switch the oven to 500 degrees F. Add the bacon to your pizza, then season with salt and pepper. 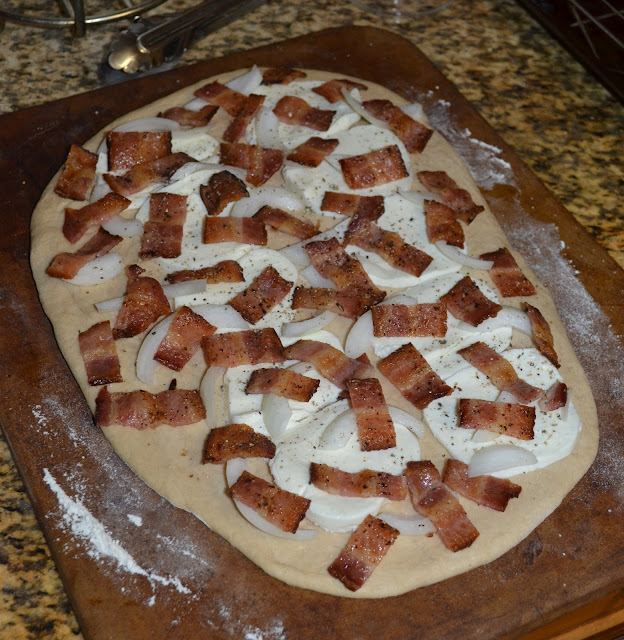 Once the temperature is at 500, bake until the dough is cooked, cheese is bubbly, and the edges are golden brown. 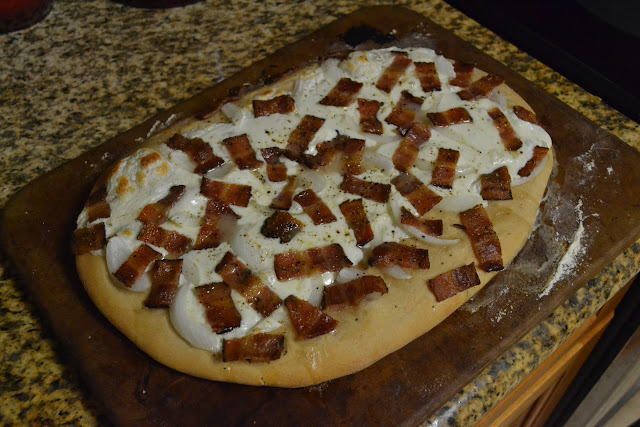 Once again, crank up the oven - this time to broil! In the meantime, add the kale, drizzle with EVOO, and season with salt and pepper. 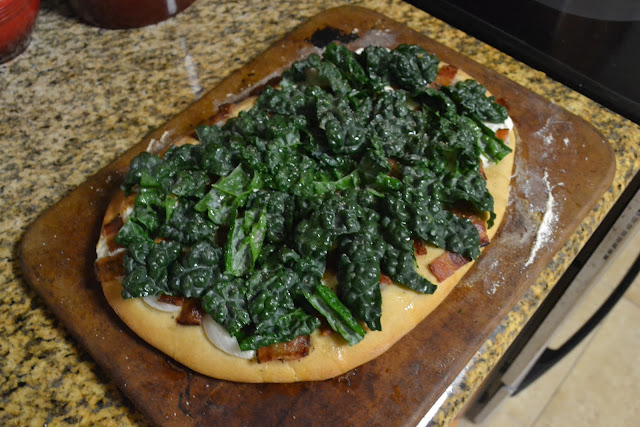 Broil this bad boy until the kale is between wilted and charred, for about 2 minutes. It will shrink down so much! 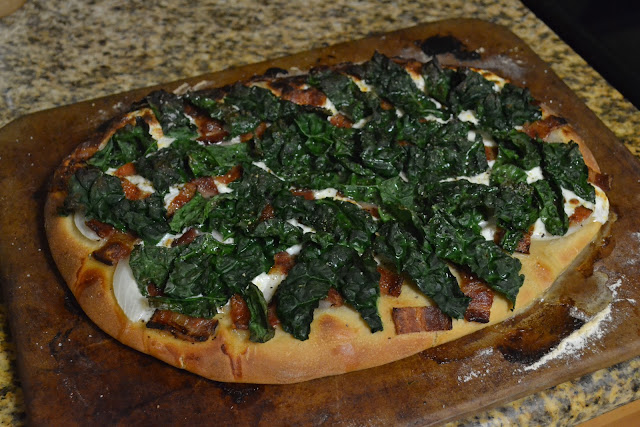 Slice and enjoy! The doughy crust was soft, fresh, and flavorful. The bitter taste of the kale disappeared in the oven and the fatty, crispy bacon and the hot, stringy cheese were perfect compliments to the wilted greens. 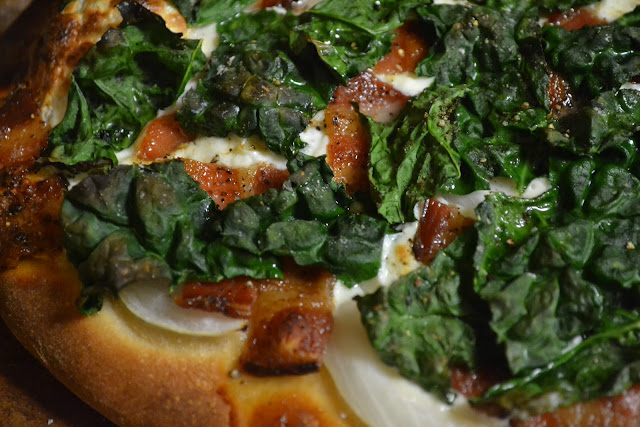 Forget a BLT sandwich. Keep the B, replace the L with a K, swap the T for the C and use a crust instead of bread! Did you get all that? Translation: make this delightful pizza!
Posted by Angela