I've been very busy lately!  Moving into a new apartment (for the 478392753th time) and eating regularly, just not blogging!  I'll try to catch up but have to make it quick if we're going to get it all covered...

The Kapiolani Farmer's Market has benefited from my business twice more since my first trip, I officially love it.  A few weeks ago I dragged my dear and pregnant friend - who doesn't want to make it internet official just yet and will remain unnamed :) - along with me.  I gladly carried the heavy items for her and we spent the morning deciding what the items the baby "wanted" and which fruits and veggies he or she is bigger than!  That trip I got a lot of Hawaii-local foods.

Here's what I got that day (second trip) and some photos of what I made with said items:

Taro dip - olive flavor (taro is a popular vegetable in Hawaii, most well known for being the main ingredient in poi).  I love sharing food with loved ones.  Sometimes, I also love having certain food items all to myself!  Bryce hates olives so this dip belonged to me and a large bag of tortilla chips ONLY. 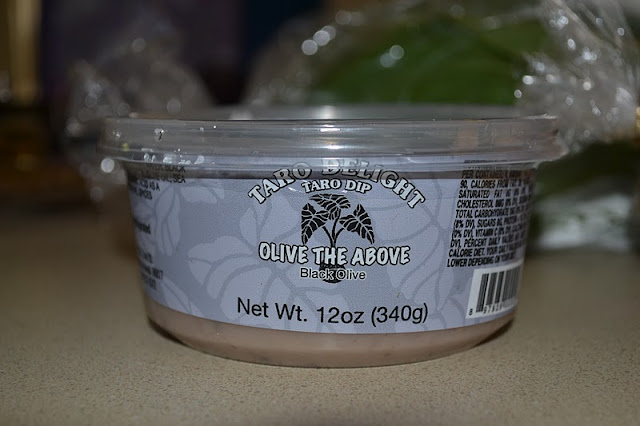 Bok choy - Chinese cabbage.  I'm not very familiar with cooking bok choy.  I only recently discovered I like eating it dishes in Chinese restaurants.  Sauteing with olive oil, salt, and pepper seems to work just great! 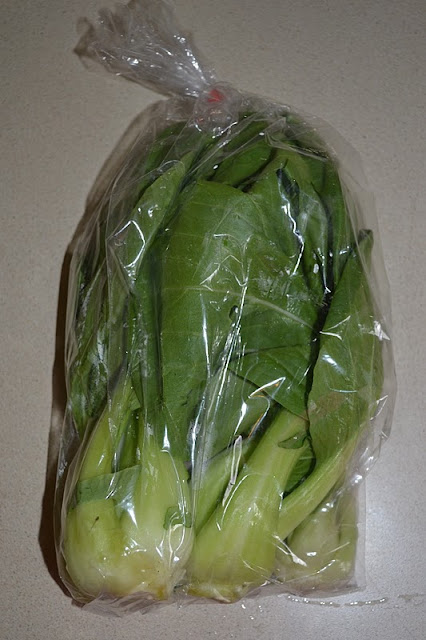 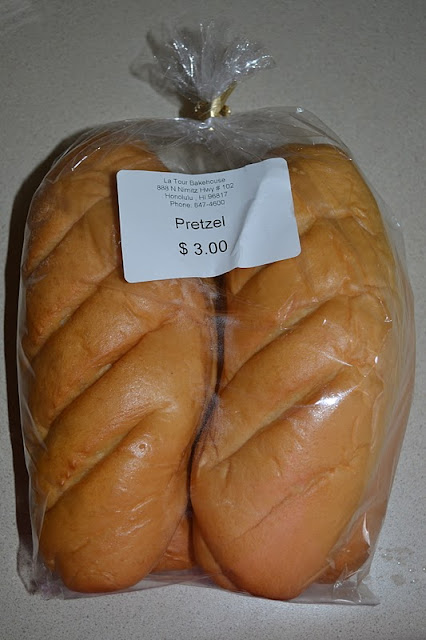 Sausage.  This is the same sausage that people were eating on a stick during my first trip to the farmer's market.  When we approached the booth there was absolutely nobody in line since they'd already run out of sausage on a stick!  Thankfully, they had many frozen varieties.  Each type cost just $2.50 and I got 2 - the chicken sausage and the Italian, duh. 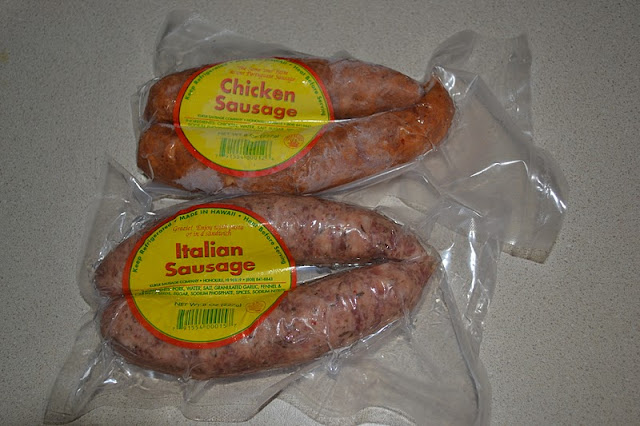 Bryce made this amazing pasta dinner using the Italian sausage and it was incredible! 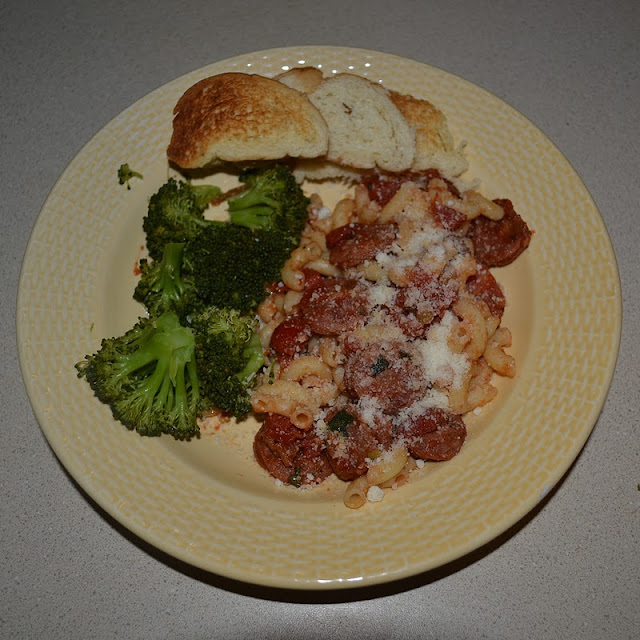 Finally, Okinawan sweet potatoes.  They're shaped kind of funny and are smaller than a regular sweet potato.  But wait... there's a surprise inside! 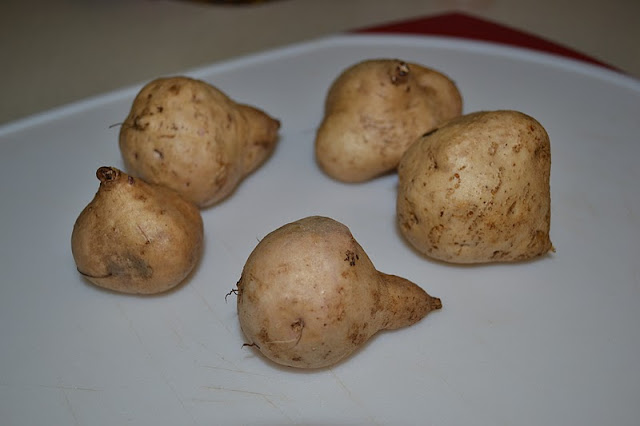 They're purple!  Peeling odd-shaped potatoes like that is not easy. 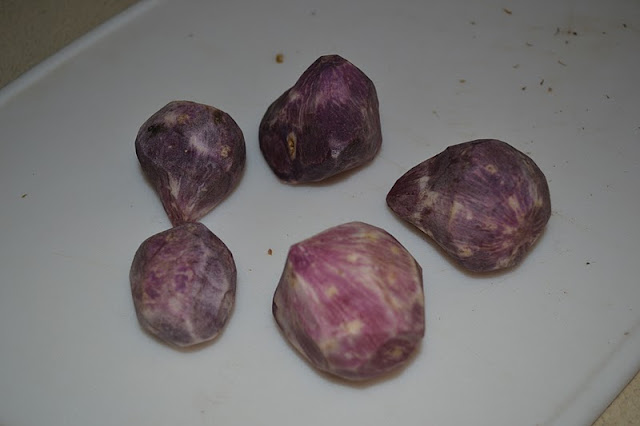 I wasn't sure just what to do with these strange purple potatoes so I sliced them thinly... 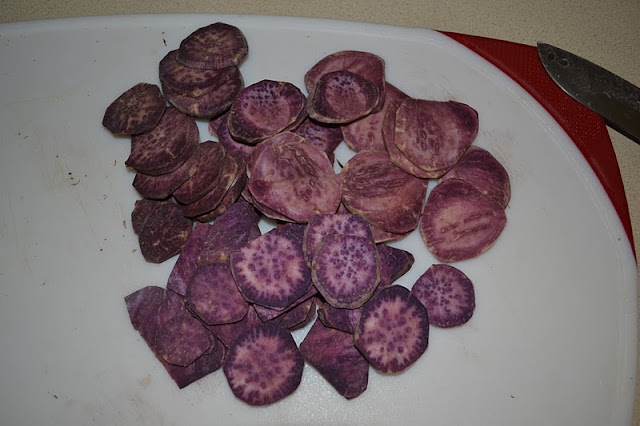 And made baked chips in the oven.  I added olive oil and salt to them and flipped them over once. This project made me realize that I need a mandolin to slice things evenly.  See how some turned golden brown and others didn't? 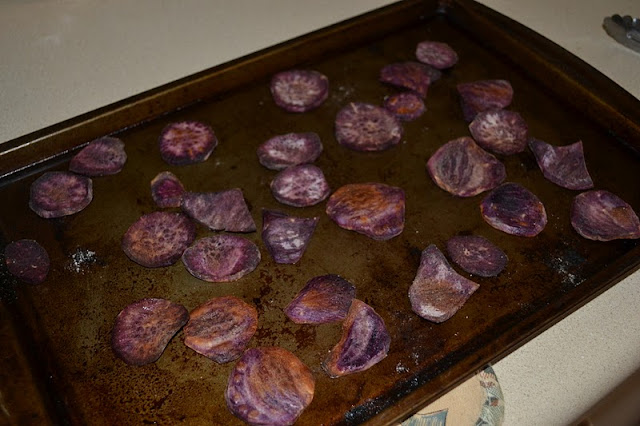 That's OK, they were all delicious!  Crispy, salty, starchy and tasty. 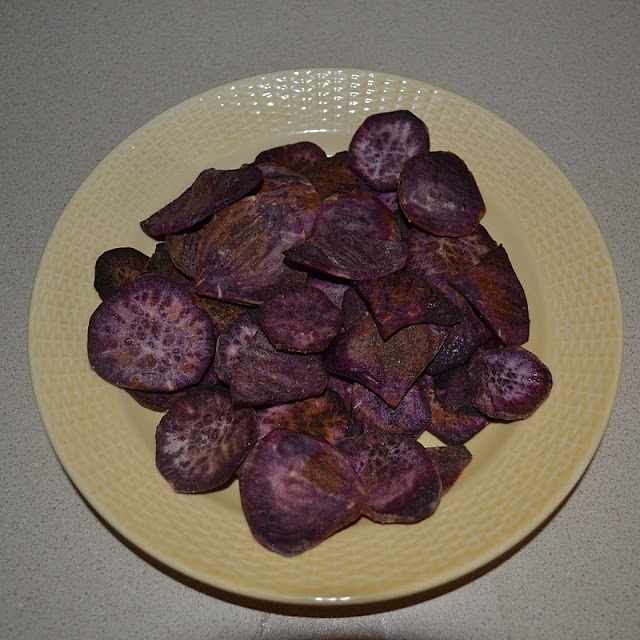 Half of the potatoes were used to make the chips.  Oddly enough, the very next day I was fed lunch at work from a perspective catering partner and he made Okinawan sweet potato mash with coconut milk!  It was fantastic.  Similar to eating a regular old orange sweet potato with brown sugar - the coconut milk added a nice, sweet compliment to the spuds.  I was inspired!  I boiled the potatoes (in my fancy new Le Creuset stock pot) and the color was so awesome!  It was reminiscent of a boiling evil witches' brew in a fairy tale. 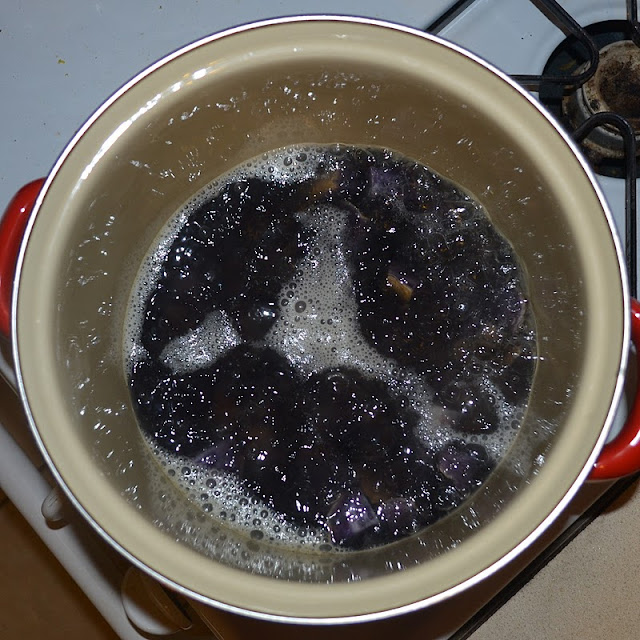 I didn't have coconut milk so I improvised and toasted some coconut flakes in the oven, then added them to the mashed potatoes.  Side note: I hate when people say things like "mash" potatoes and "ice" tea.  They're mashed, tea's iced, use a verb. 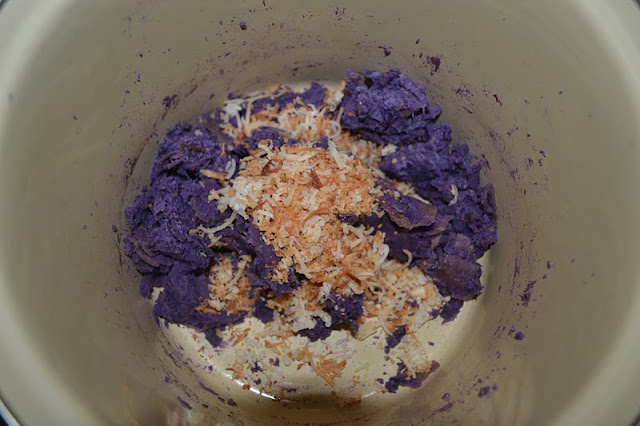 The mashed Okinawan sweet potatoes with toasted coconut flakes were so yummy!  Just the right amount of sweetness and such a beautiful color. Somehow I got Bryce to come with me to the Farmer's Market this weekend (third trip)!  We went shortly before it closed up and the crowds were dying down so it was a quick and easy trip, much to his enjoyment.

Here's what we got:  More pretzel rolls and sausage - this time another Italian and a pineapple sausage!  Corn on the cob, "sassy" lettuce blend, fresh catnip for Bagheera (Who knew catnip was in the mint family?  10 points if you did!), Maui onions, feta cheese, and grape tomatoes. 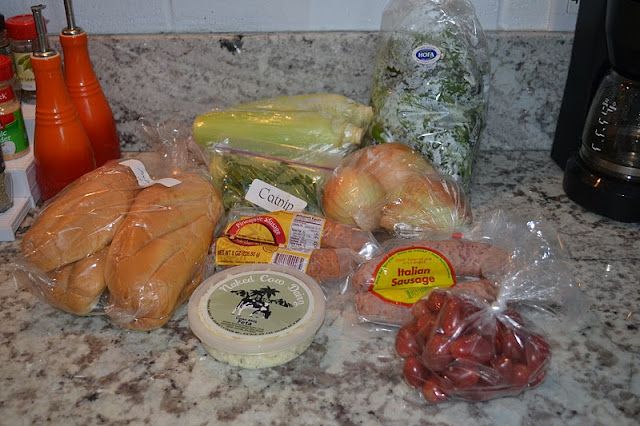 Like the new kitchen and granite counter tops? I DO!  We started making lunch almost immediately after returning home.  Using two Le Creuset items at once is a natural high! 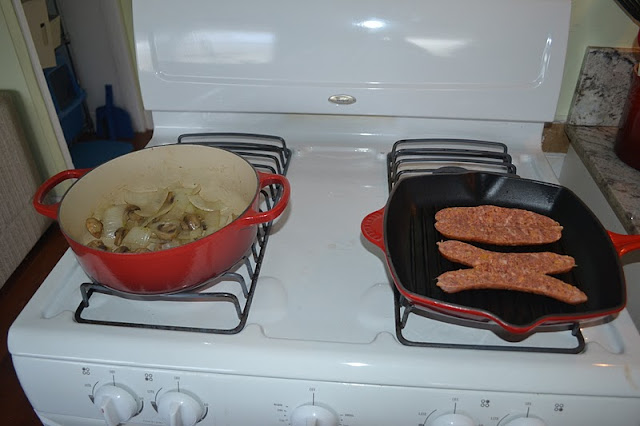 Pineapple sausage subs on pretzel rolls topped with mushrooms and Maui onions, with a side of broccoli.  Yummy in my tummy :) 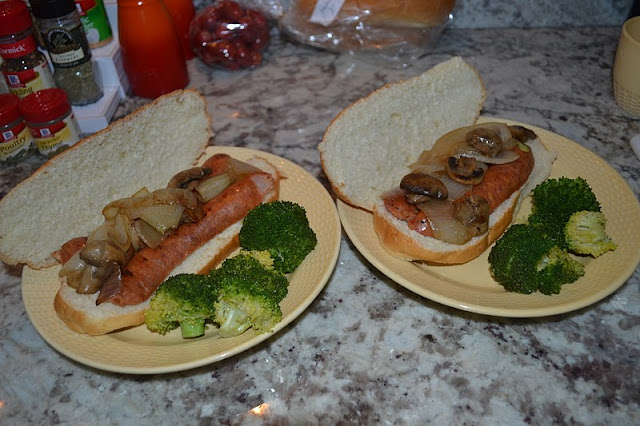 Just a few hours later we were invited to a friend's house and made a variation of this tomato and feta cheese salad.  We bought a sourdough baguette and ate it like bruschetta.  I highly recommend that you make this immediately!  The flavors are fresh and the feta is delicious and creamy. 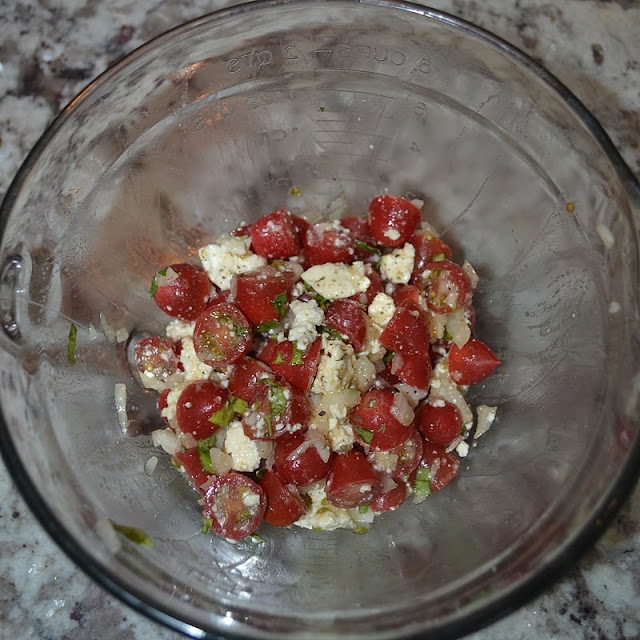 Bagheera was wasted from her catnip trip for most of the day!  She likes the new apartment and has since expressed interest in cookbooks and magazines - I think she's been paying attention to what Mommy's been making!  Should I take her to the farmer's market next time?   People bring their dogs in strollers, why not a cat? 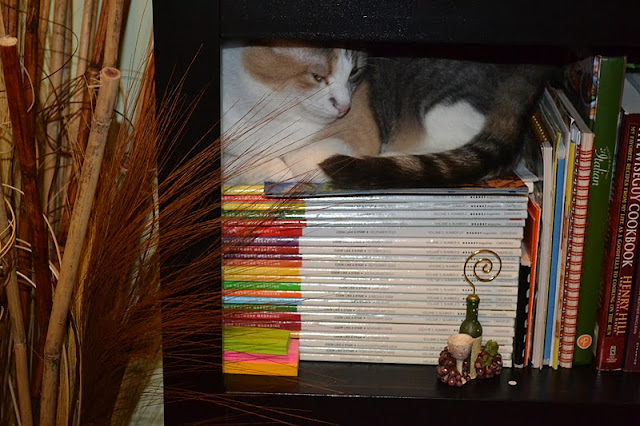