It's summertime in Seattle. Summer officially kicked off last Saturday, June 21, with the nearby Fremont Fair and Solstice Parade, including a naked bike ride! I'll spare you those photos. You're welcome!

What I will share is a photo of three fully clothed humans - Mike (Bryce's Dad), Bryce, and I. Mike is our first summer visitor and, of course, we dragged him through the (Pike Place) market on Saturday morning. The crowd was crowded and the weather was great. This, from what I understand, is Seattle in the Summer. We couldn't allow him to visit without participating in all of the new-to-Seattle rituals. First was posing at the gum wall. 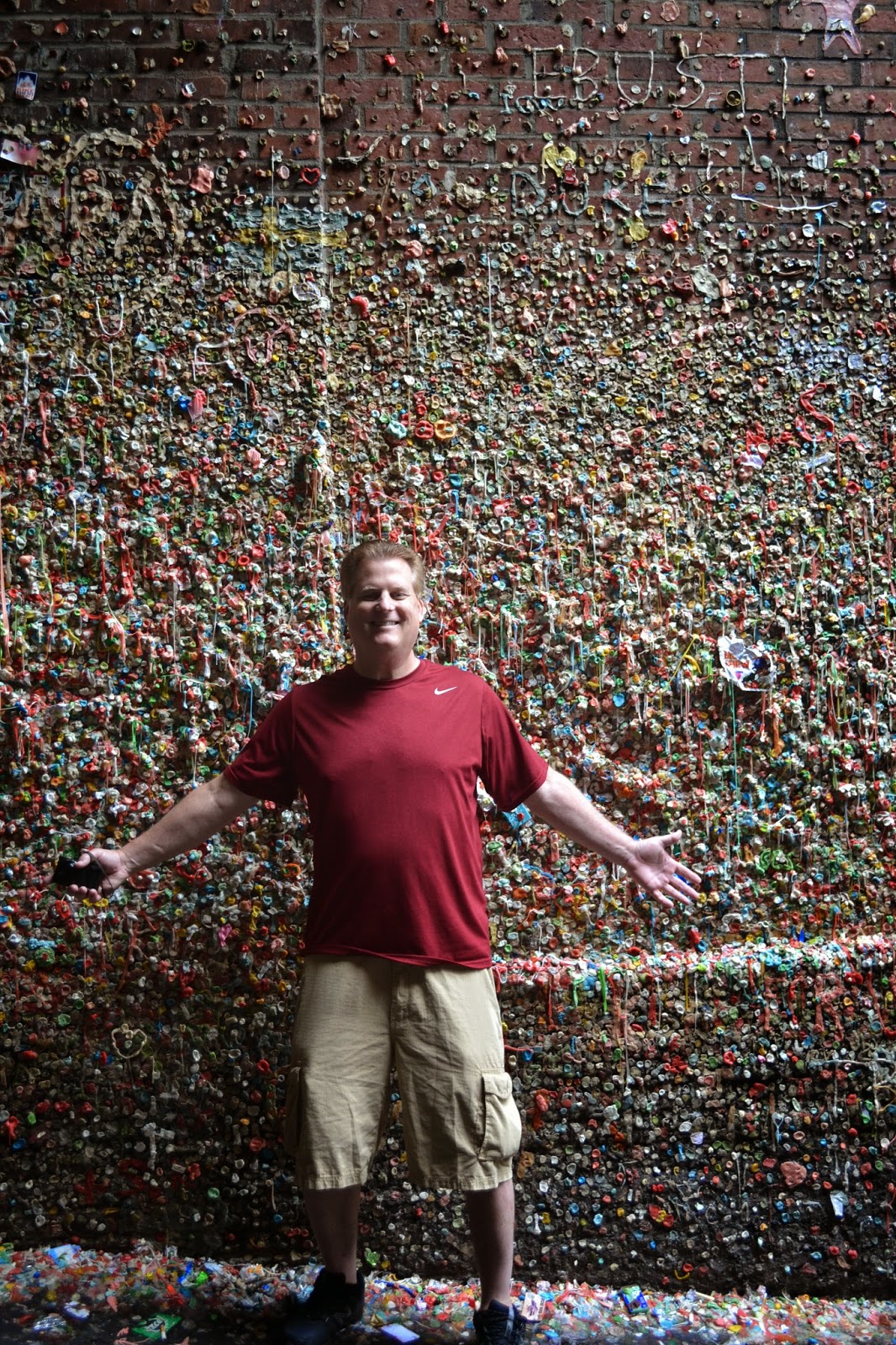 Followed by greeting Rachel the Pig. 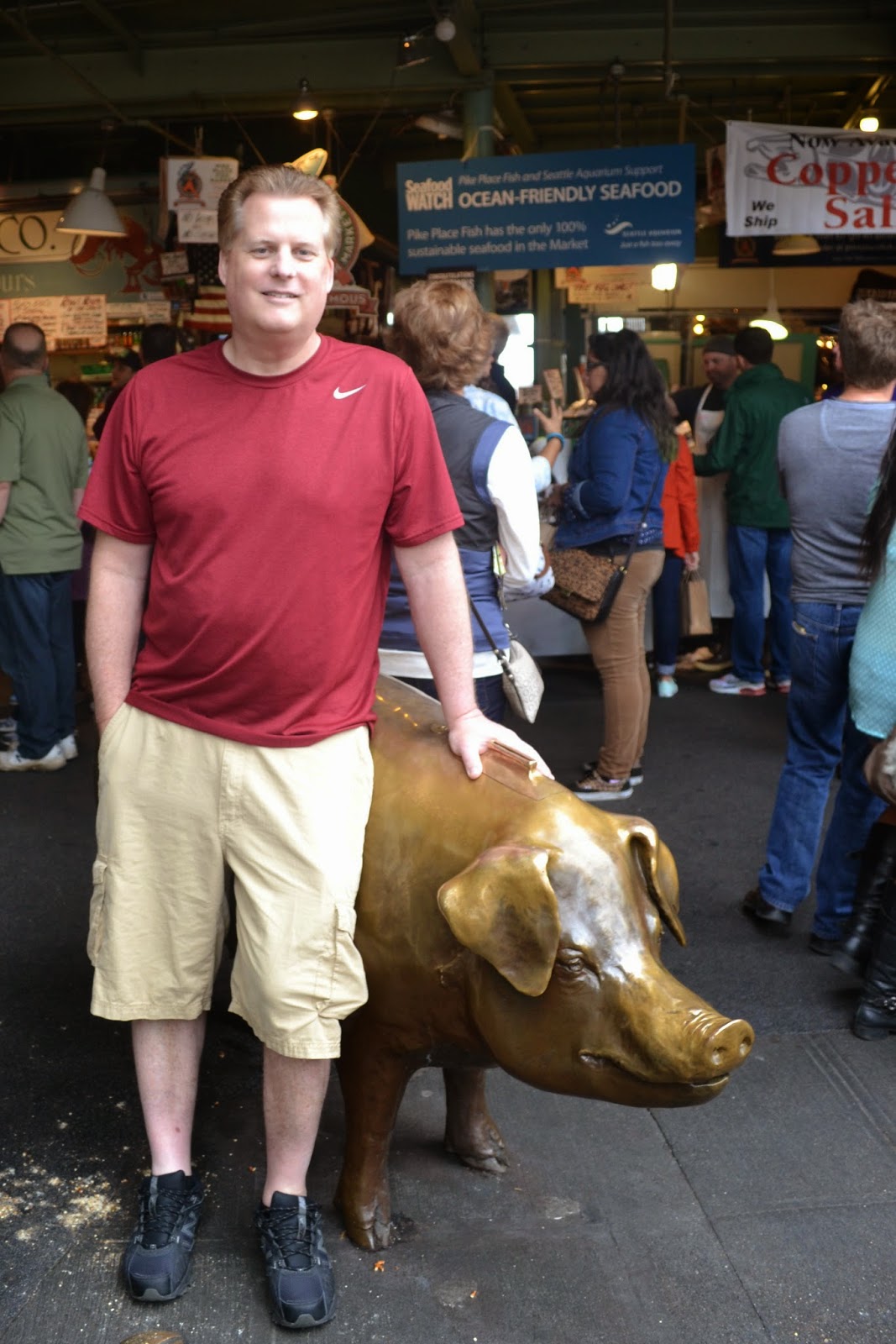 Finalizing the trifeca was a visit to watch the fish fly at Pike Place Fish Co. 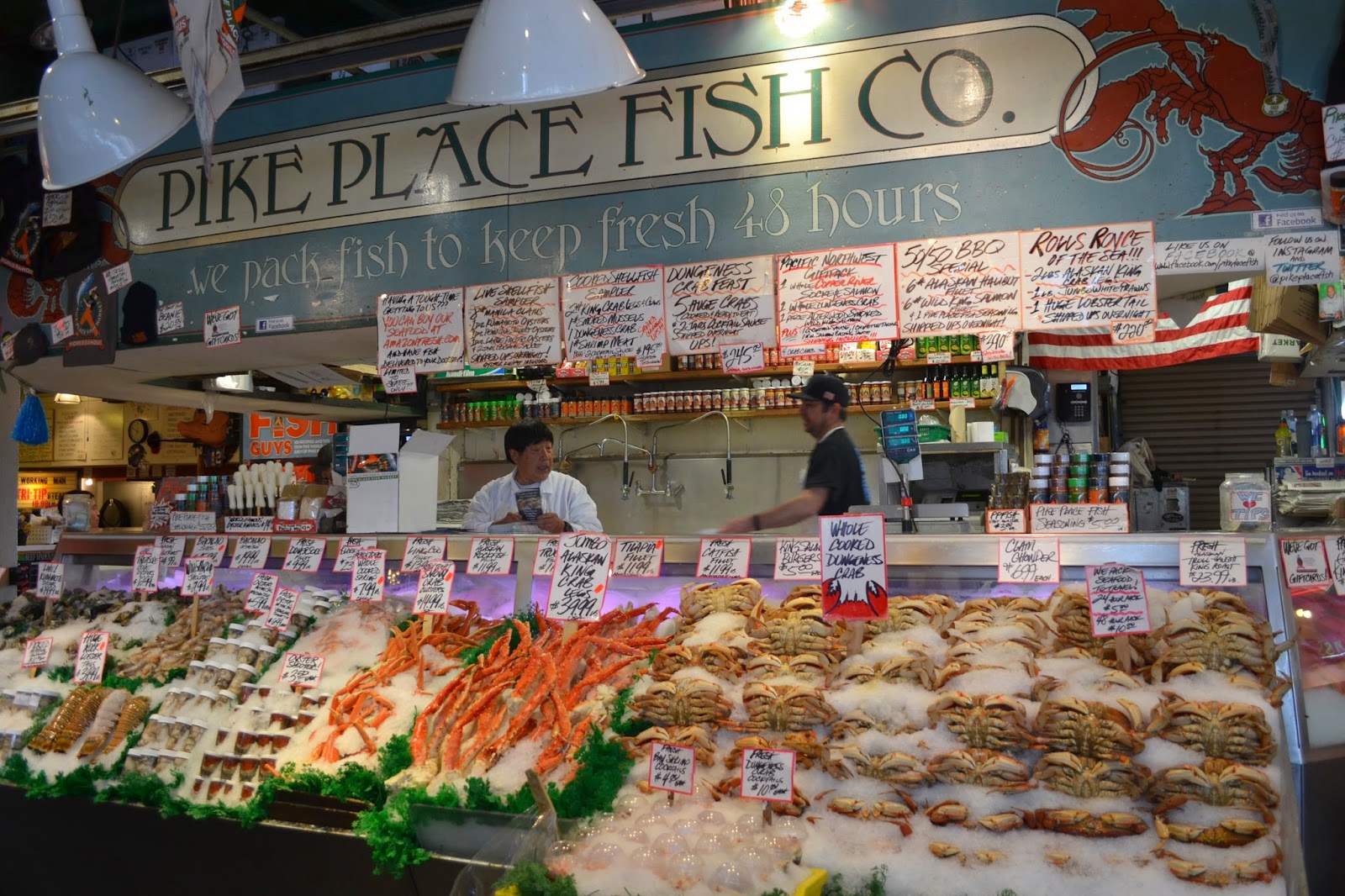 The summer produce was certainly showing off! Look. At. The. Cherries. 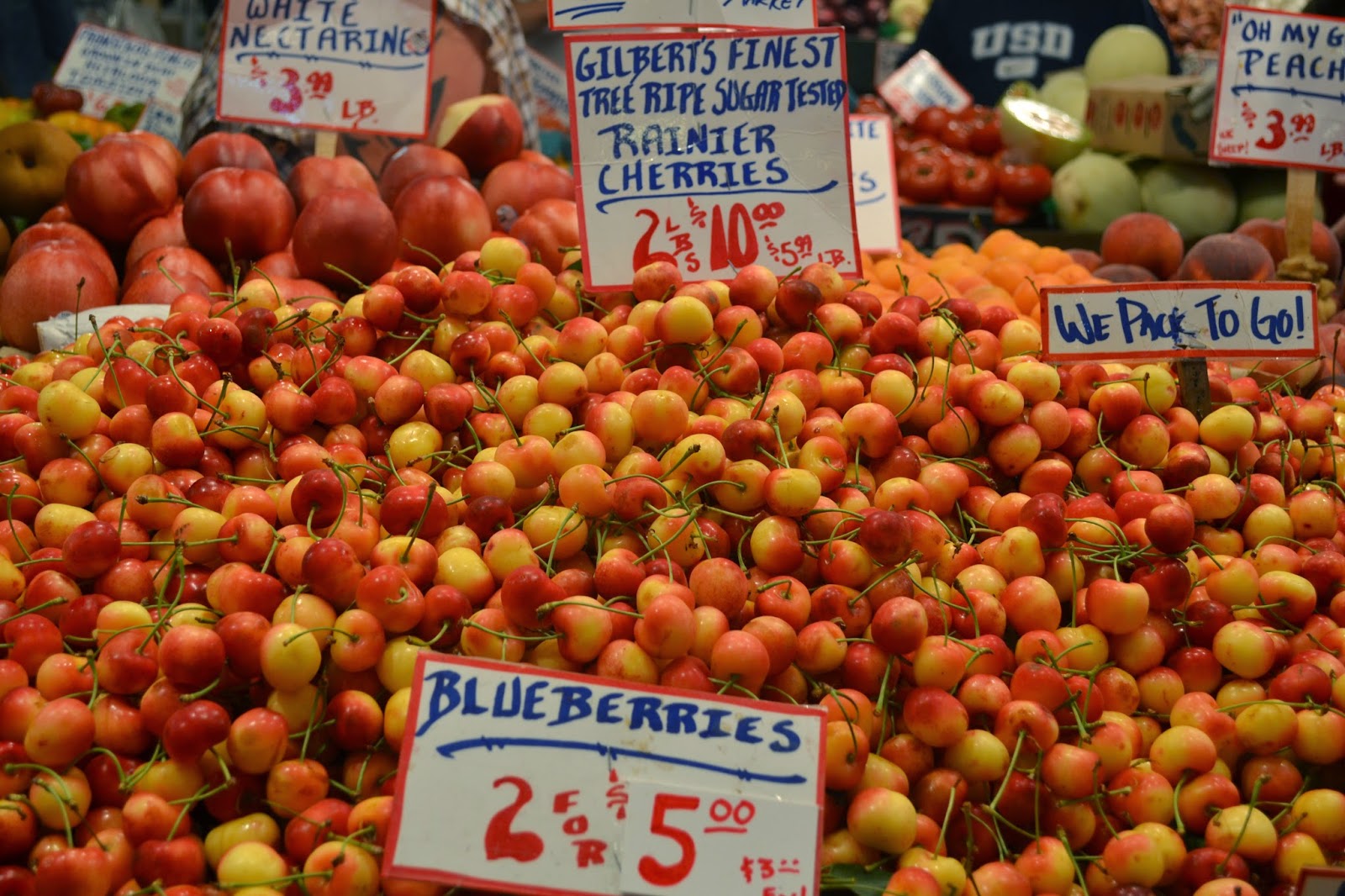 Romanesco, also known as summer cauliflower, is the most gorgeous vegetable I have ever laid eyes on. It looks like it grows in Narnia, Oz, or Whoville and should be served at Hogwarts. It's been around at Pike Place Market all year, although it was looking a little shabby throughout the winter. Now it's wonderfully perfect! 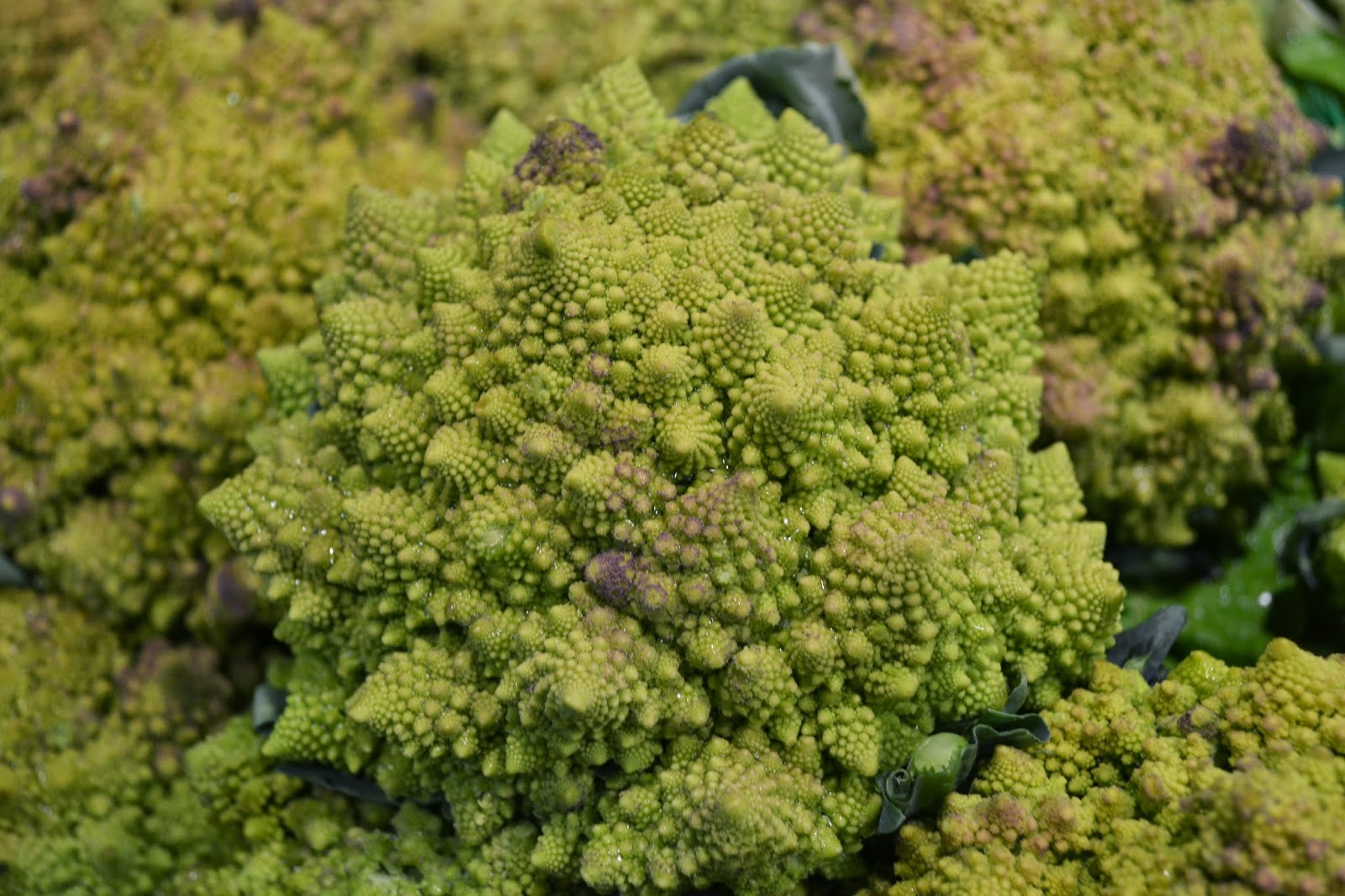 A new vegetable to catch my eye was kohlrabi. Who has a suggestion on what to do with it?! 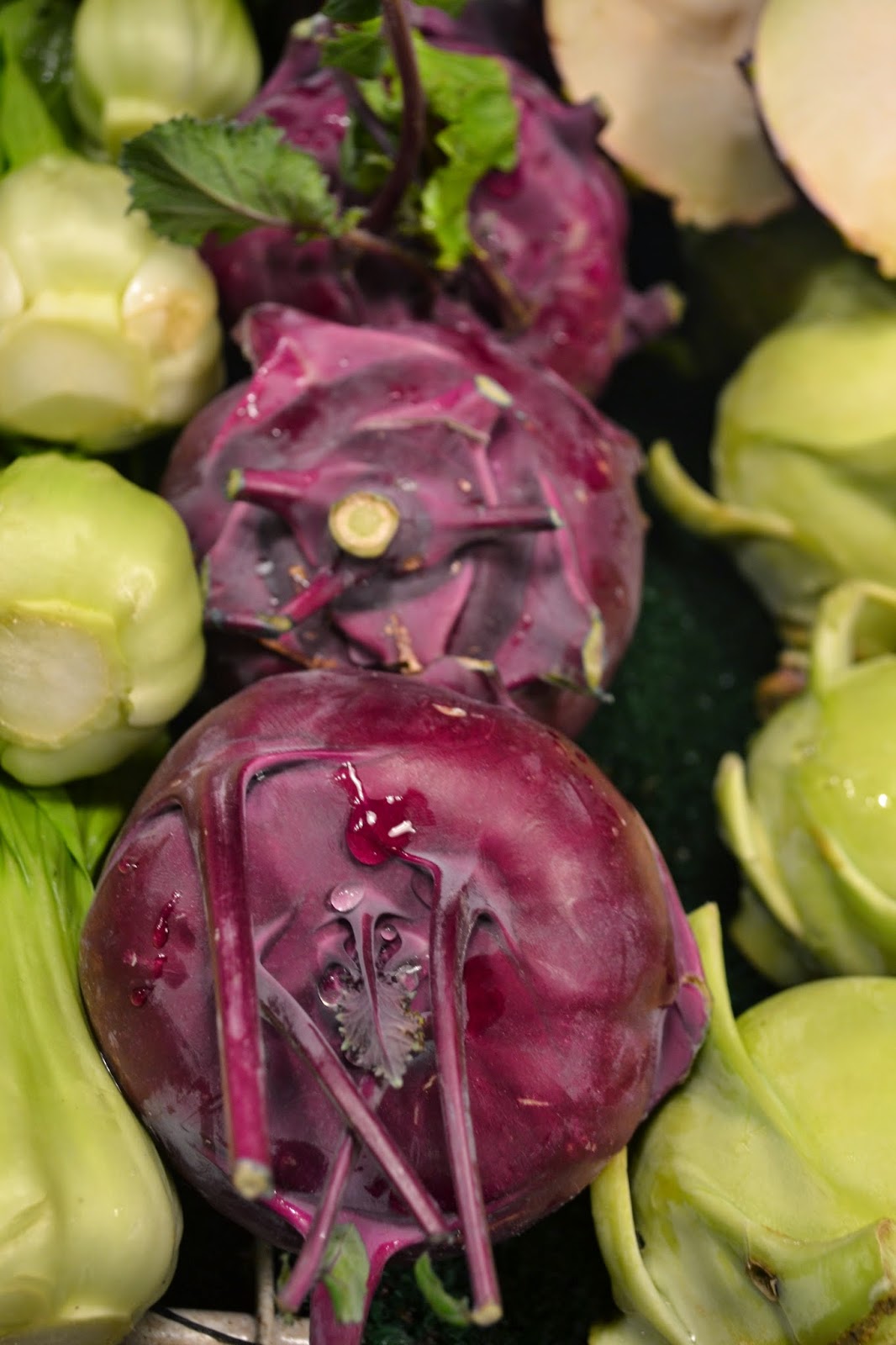 It's tiiiiiiiiiiiiiiiiiiiiiime, it's time, it is TIME for fresh figs. My Pap always used to tell me that fig season started when it was time for me to go back to school. Either he was a) lying to me, just like the time he said he just wanted to "wiggle" my loose tooth, or b) being honest and our regions have different timing for these jems to come to fruition. It's funny how the figs have borrowed the colors from their neighboring fruits, lychee and cherries. 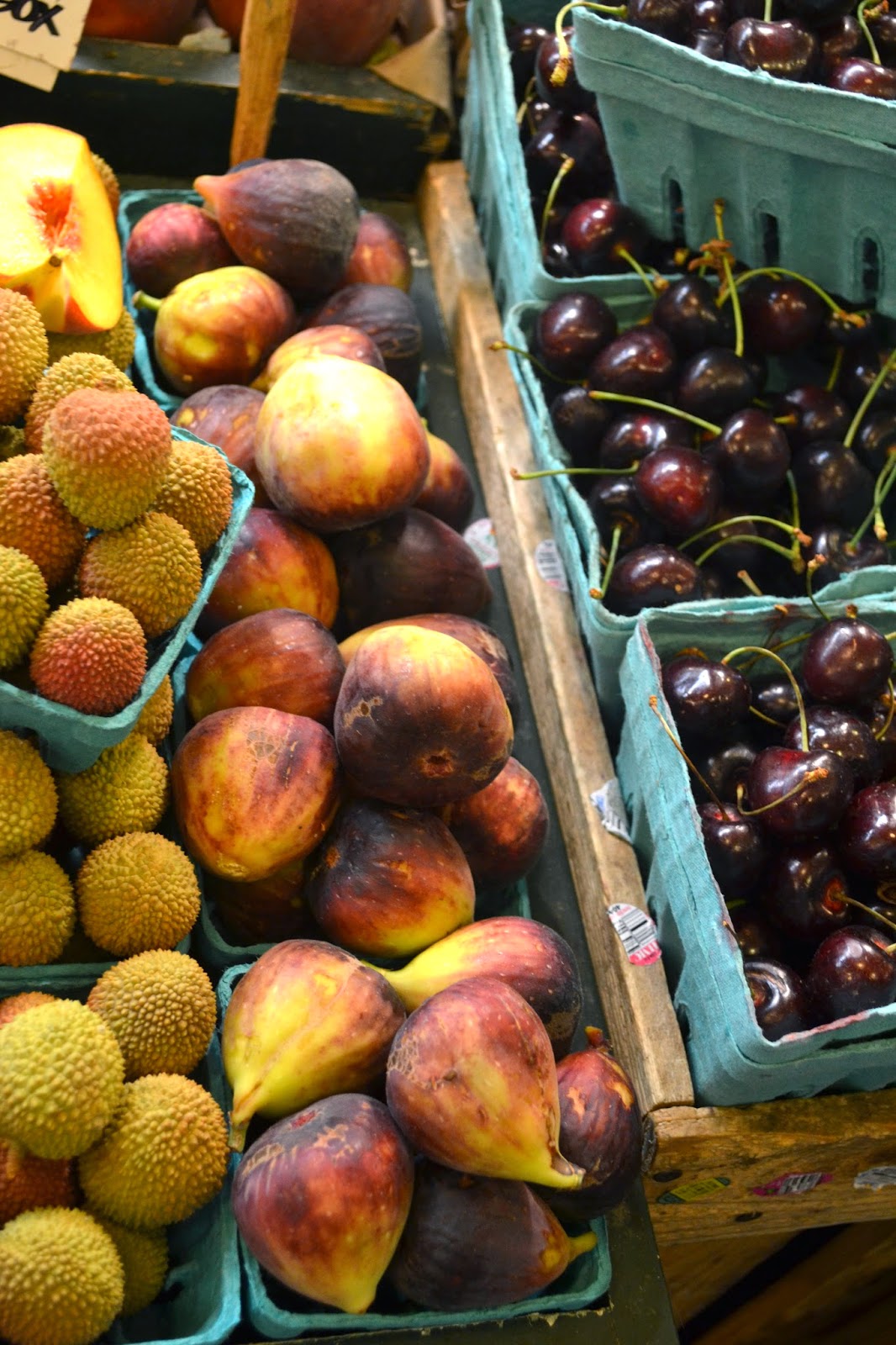 After scouring the fruit vendors, I went back to the stand with the most beautiful figs. As I was taking the photo, the sales man said to me "they taste much better than they photograph" and he was so correct, and sassy.

Here's the other great thing about Seattle in the summer, you switch from your winter rain coat (grey, long, see below) to your summer rain coat (mint green, short, see the first photo in this post, above). It's been far less rainy and temperatures are warm, but not hot. The photo below was taken the first time I went to DeLaurenti and was far too excited about the cheese selection. Yesterday I marched right in and made my first cheese, and meat, purchases there after window shopping for six months. 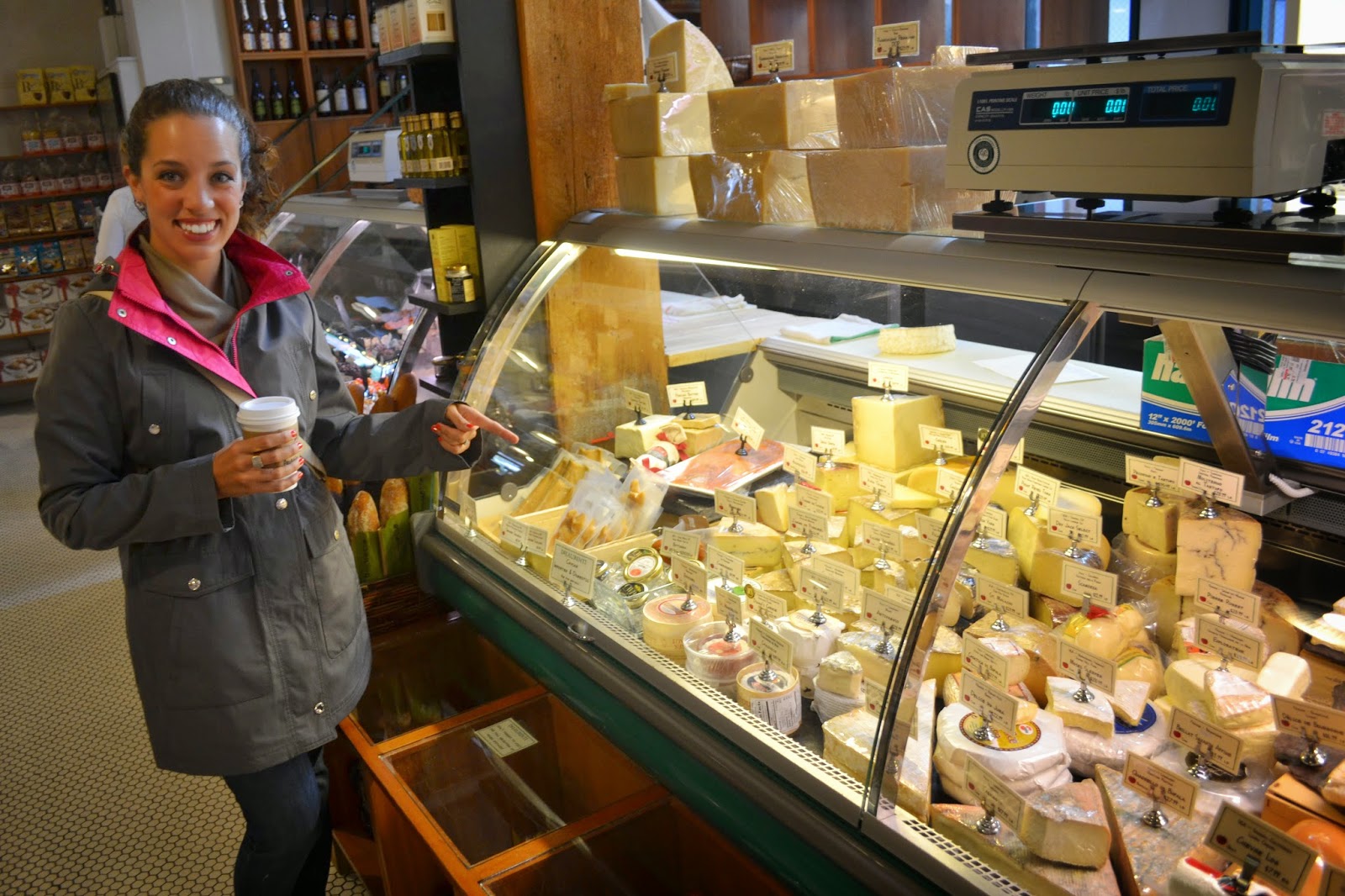 The man who helped us select our meat and cheese was far friendlier than the sass-mouth at the produce stand and he hooked us up with the best salami I've ever had. It's called Finnocchiona Salame and it's made with fennel. It was sliced thinner than a sheet of paper and it truly melts in your mouth. The accompanying cheese is Challerhocker, a Swiss made from raw cow's milk. It's salty and delicious and the two are perfect together. [The salami was $15.49 per pound while the cheese a whopping $37.99 a pound! We just got 1/4 lb of the cheese :) ]

After a long day on our feet this was our relaxing "dinner". Figs + wine, bread, meat, cheese, almonds, and pears. Simple and delicious!

Here's to a fun and fig filled summer, mangia mangia!