My apologies, as I prematurely published this post before I was finished! Here's the whole shebang. Grab a snack because it's a long and delicious one.

Our very first adventure in Seattle was a guided food tour of Pike Place Market through Savor Seattle Tours. 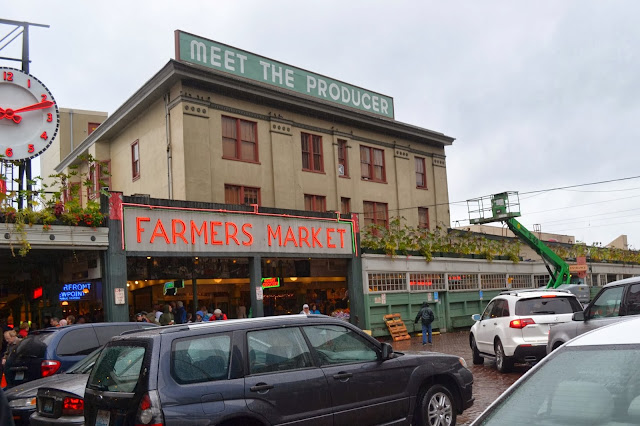 The market is absolutely alive on a Saturday morning! We headed down to the Lower Post Alley area to meet our tour guide at the Market Theatre. 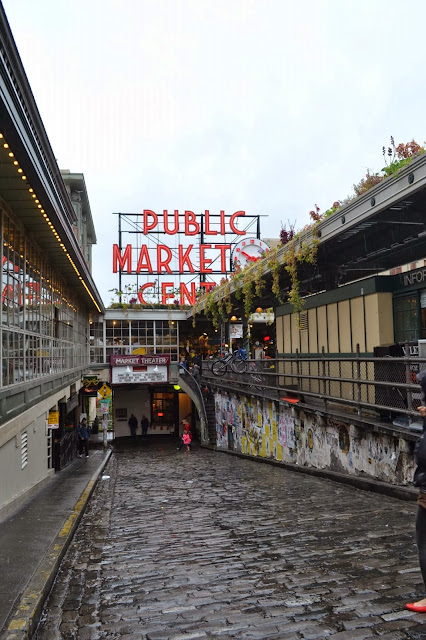 The meeting place was just next to the famous gum wall. Double bonus! It smells oddly of Big Red. 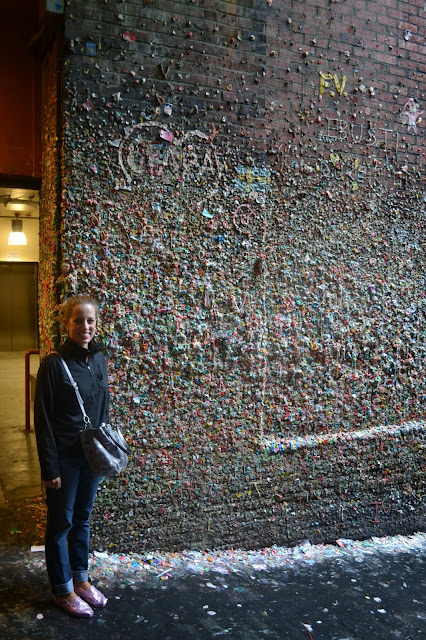 Bryce contributed to the ever growing wall-o-gum, which actually began by accident when the theatre in which we met for the tour installed new carpeting and asked that nobody chew gum inside! 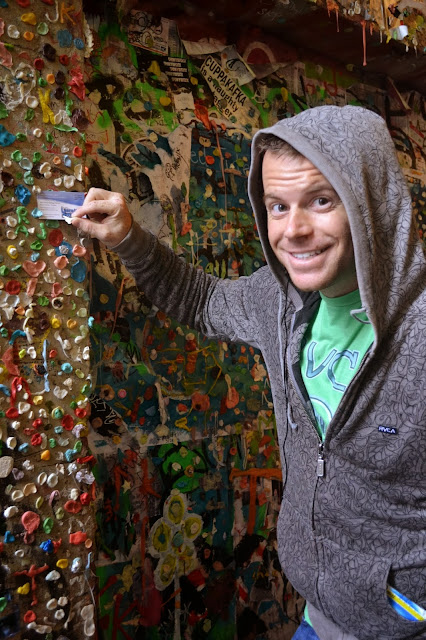 I'm so glad we decided to explore the market on a tour - our guide was so friendly and knowledgable, we tasted so many samples, and we never had to wait in line. The indicator that it was going to be a great tour is that it began with fresh doughnuts at 10:00 am! Our first stop was Daily Dozen Doughnuts where we huddled in a circle surrounding a brown bag filled with hot, doughy, sugary doughnuts. Bryce even got a double. 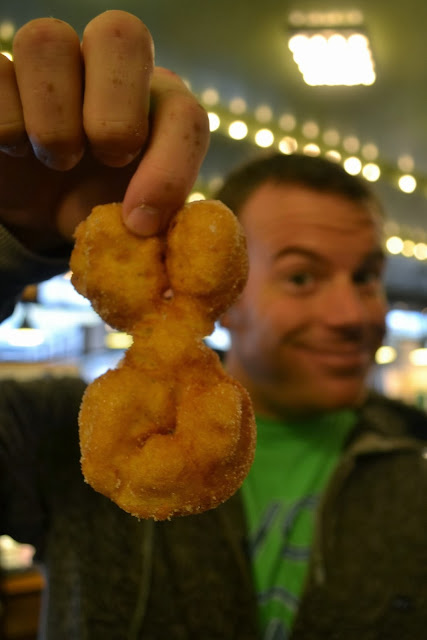 Our next location was just steps away and a perfect compliment to fresh doughnuts on a rainy (duh) Saturday morning - hot tea! MarketSpice is famous for their cinnamon-orange tea and it was perfection in a small cup. 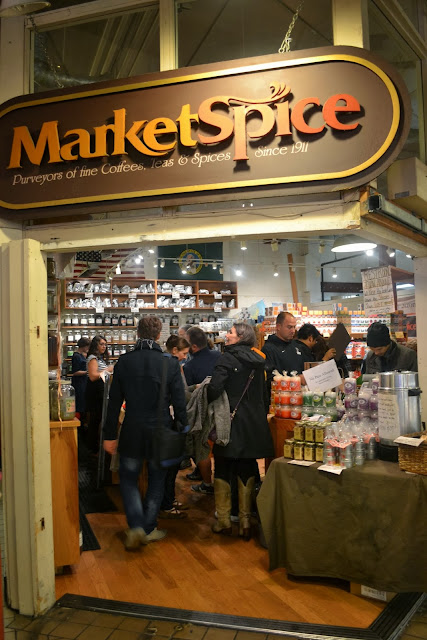 Bryce isn't a hot tea drinker so after just a sip, I was the one doubling up on the goods at MarketSpice! Their signature tea warms the soul. 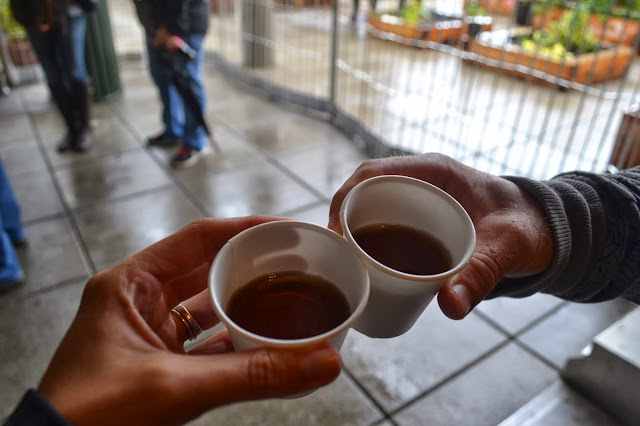 The next stop was imminent, we knew we were approaching the infamous Pike Place Fish and the excitement was building! 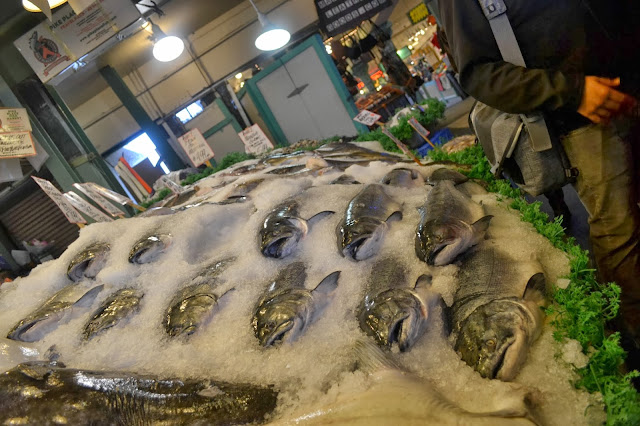 We sampled three types of smoked salmon and each tasted better than the one before, including a morsel that tasted like bacon! 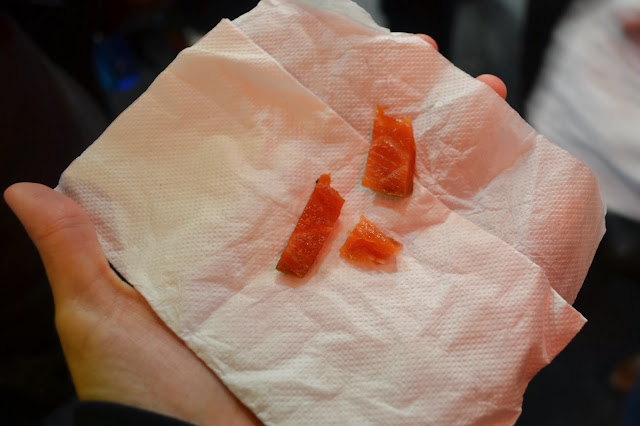 We were there at the perfect time, as a customer had just purchased a whole fish and was lucky to be able to catch her own! I stood directly behind the fish monger and had a great view. 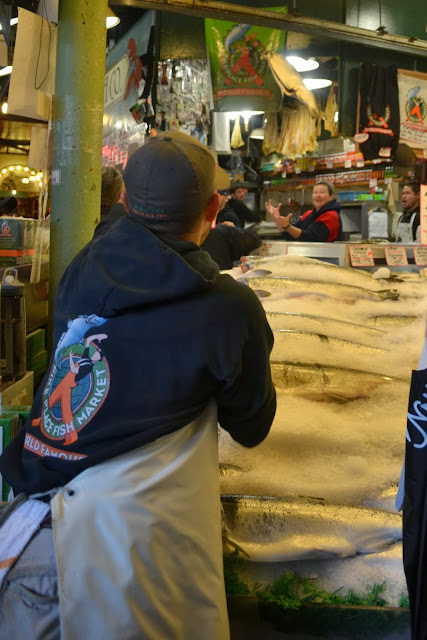 Girlfriend actually dropped her own fish, but was able to redeem herself with a second try. They actually throw the same fish for several days, then donate it to the zoo to feed the bears!

Our next stop was to Frank's Quality Produce where we sampled fresh, juicy, delicious pears and blood oranges. 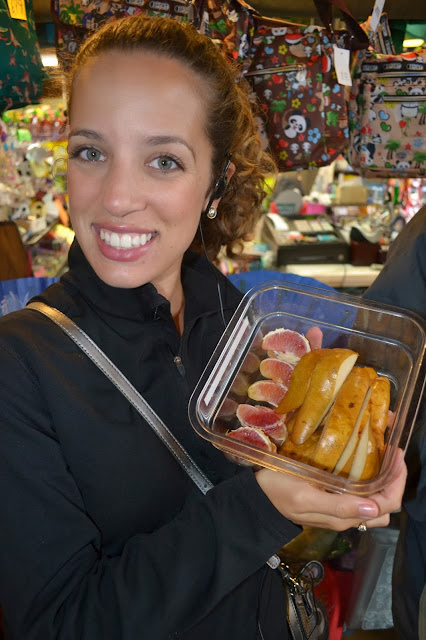 I don't recall much about what we were told surrounding the history of Frank's produce (something about a family business) because I was distracted by... 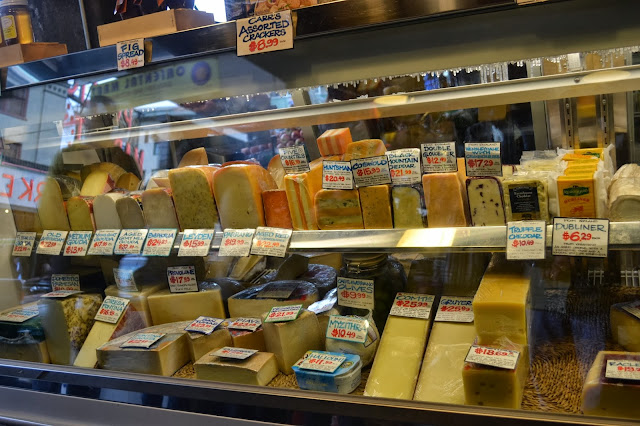 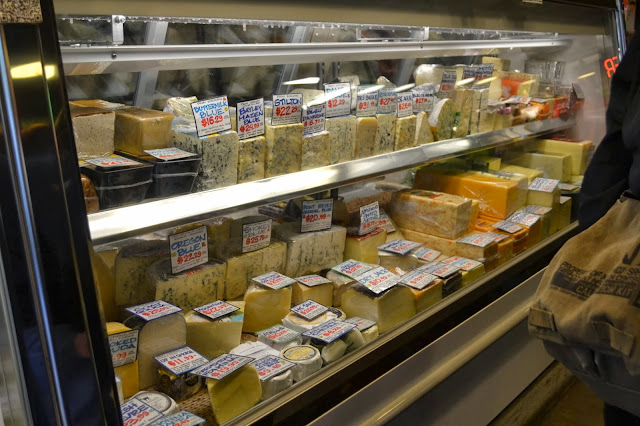 ...cheese! As we sampled the pears I dreamed about stinky gorgonzola paired with them.

Thankfully something decadent was up next - Pike Place Chowder! 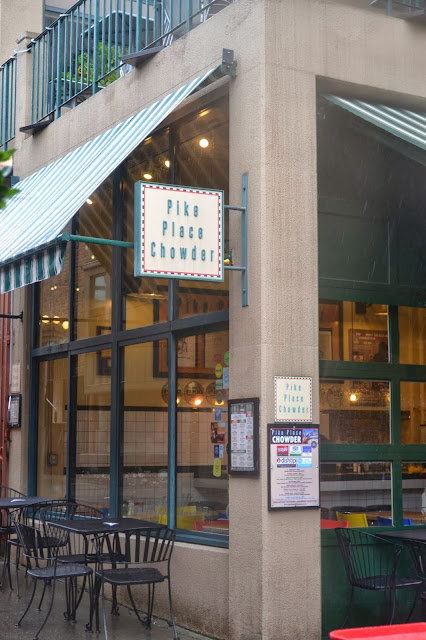 Their chowder was mind blowing and certainly the best clam chowder I've ever had. 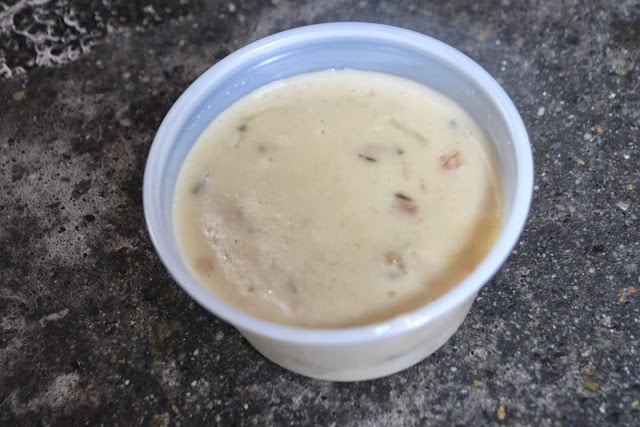 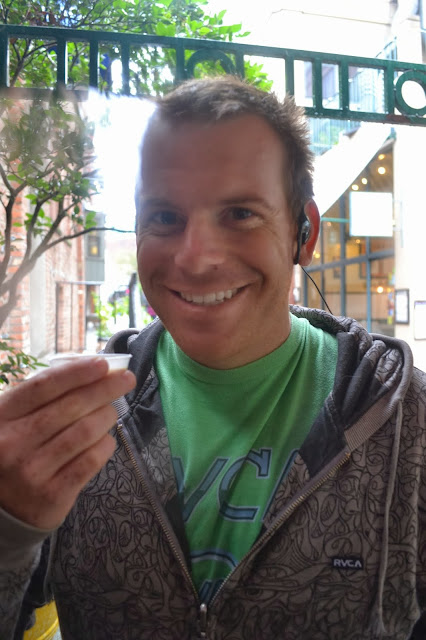 The hot soup was perfect for the weather and the next destination was snack time at Chukar Cherries. My mind was blown by the cherry salsa﻿! I WILL be back for more of that goodness. If that weren't enough we also tried five (yes, 5!) varieties of cherry, most of the candy variety. 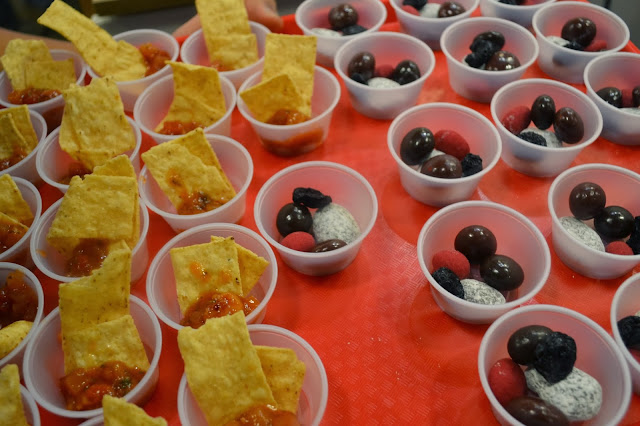 ﻿
Finally we were on our way to Beecher's Handmade Cheese. 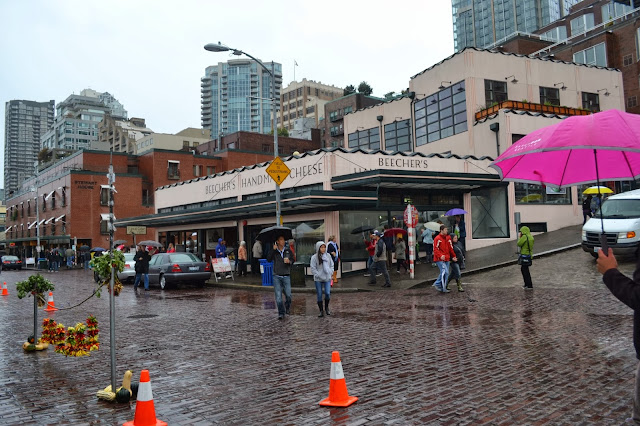 I felt like a child, giddy with excitement as we watched through the big glass windows. Perhaps my favorite photo of the day is this one of some adorable littles watching in awe. 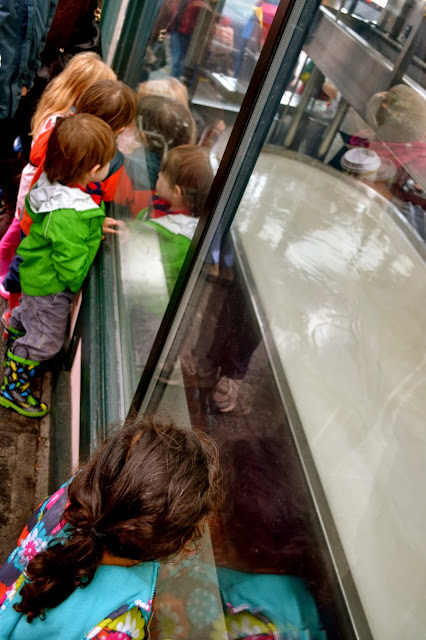 Oprah's mentioned their mac and cheese as one of her favorites so I was really excited to try it. 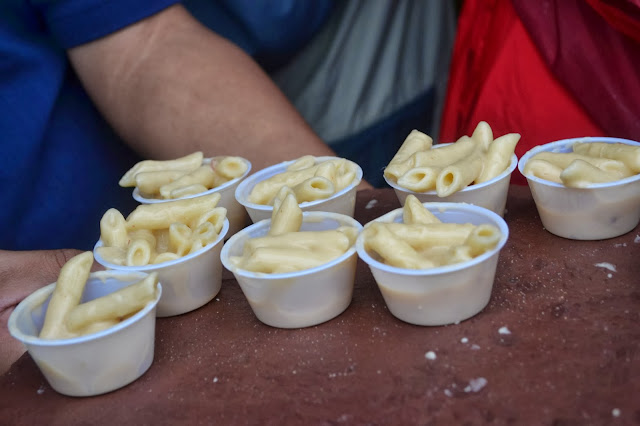 The m&c was good, although I think their flagship cheese with homemade rosemary crackers was even better! 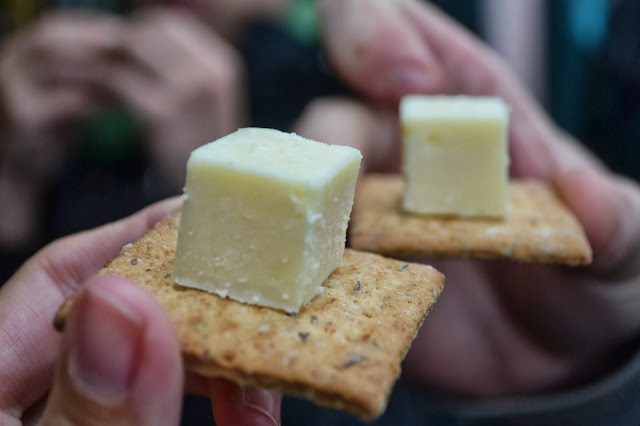 At this point we were really full, yet we found a way to continue to snack. Our second to the last stop was Piroshky, Piroshky, a Russian bakery famous for their pastries. 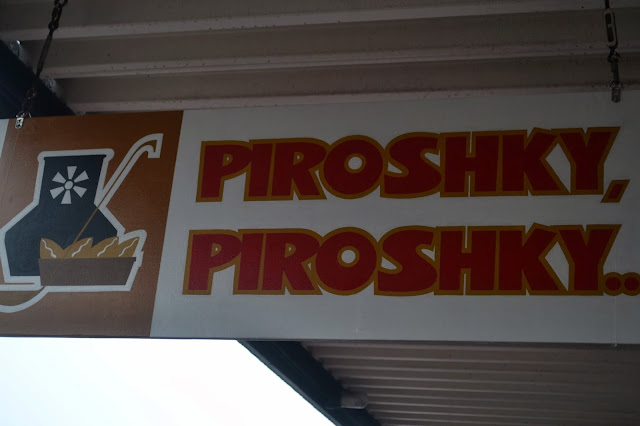 We enjoyed 2 varieties: one savory, a meat and cheese combo, and one sweet, an apple and cinnamon mixture. They were incredible! 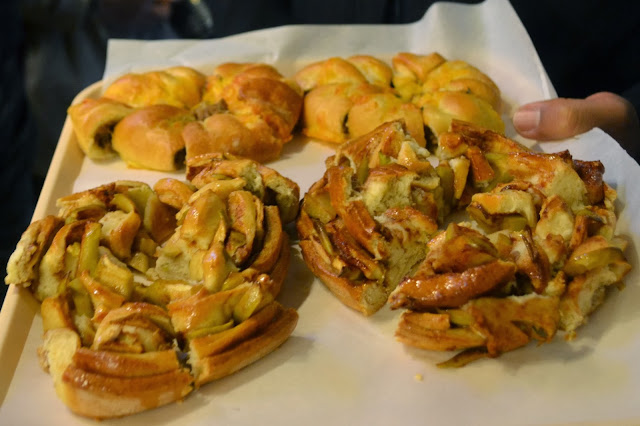 Our final stop was at Etta's Seafood, just as it began to pour! We enjoyed a delicious, mini crab cake with dill sauce. 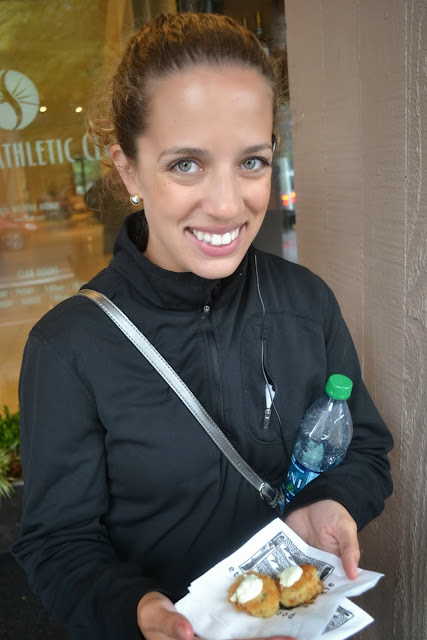 It was hot and comforting, a perfect way to end our morning of food tasting! 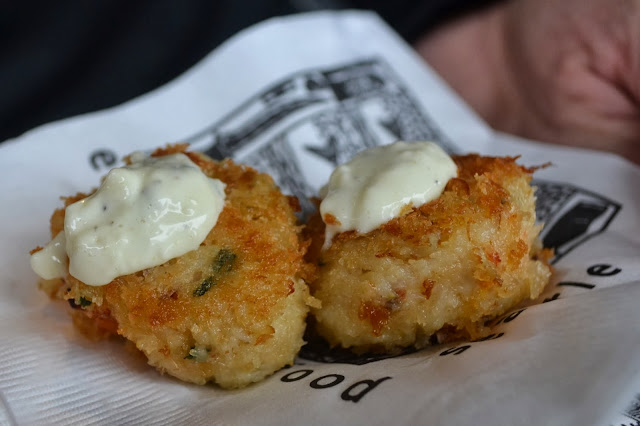 We revisited many of these spots again during our stay! Because sometimes one sample just isn't enough.